Yesterday I saw Avatar in 3-D at the MK2 Bibliothèque in Paris. Enjoyed it while it lasted, discussed it for about three minutes with companions, then forgot about it. It’s a sealed package which doesn’t invite audience input; not a lot to mull over and it doesn’t come back to haunt you, though I daresay if you thought fire-bombing sacred trees was a Good Thing, it might give you pause for thought.

Some random thoughts that occurred to me:

1) This is not science fiction. It’s Cowboys and Indians.

2) James Cameron has developed millions of dollars’ worth of technology in order to deliver the message that technology is bad. Crazy guy! Basically, he’s a techno geek who’s emotionally stuck at adolescence. His idea of alien sex is sloppy kissing! It’s alien sex as envisaged by an adolescent male whose role model is Captain Kirk. I’d like to see the Na’vi having slimy sex like David Bowie in The Man who Fell to Earth. Or tree-huggy sex. Whatever. A wasted opportunity.

3) The vegetation is amazing. Would have been happy to dispense with stupid plot and just had botany tour of the planet. Tree-huggy sex with flora like this would have been interesting.

4) The Na’vi don’t do a lot, do they? Cameron and co have gone to all that trouble creating a language for them, but they’re just kind of there when the plot needs them, no sense of their life offscreen. What’s their culture? Their cuisine? Though I do like the Mountain Banshee riders’ ethnic treebark Ray-Bans, as well as the Plug-in Plait of Power. Maybe I should grow my hair.

5) The Plug-in Plait of Power reminded me a little of the phallic growth in Marilyn Chambers’ armpit in Rabid. Hmm, I guess eXistenZ was Cronenberg’s version of Avatar. Do you suppose the Plug-In Plait of Power could be used for evil? If the thing you wanted to plug into wasn’t willing but you went ahead and plugged in anyway, would that be rape?

6) Dances with Wolves. Ferngully. The Matrix. Manga. But Nausicaä of the Valley of the Wind, Princess Mononoke and Paprika were all considerably more sophisticated in storytelling terms. Where’s the wisdom in spending half a billion dollars on a live-action manga which is half-animation anyway? 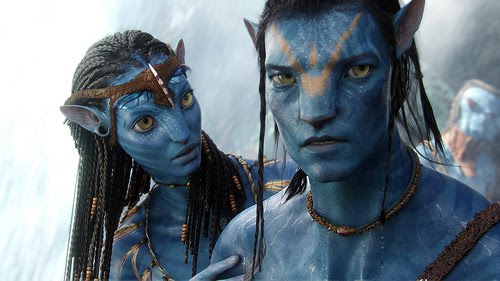 7) Neytiri’s breasts! They’re there, yet not there, and you’re never quite sure if it’s an effect of the beads and the treebark and stuff. Reminds me of Darryl Hannah’s breasts in Splash! It would have been better to get them out in the open, so I could have ignored them.