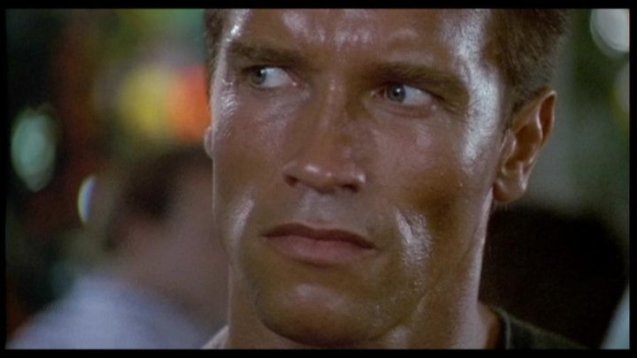 In February 1986 I interviewed Arnold Schwarzenegger for the London listings magazine Time Out to coincide with the UK release of Commando. The interview took place shortly after the UK release of Pumping Iron II: The Women, sequel to the 1977 documentary Pumping Iron, the film which really put Schwarzenegger on the map. By 1986, he had already made Conan the Barbarian and The Terminator, but was still more of a cult figure – with a huge gay following – rather than the A-list superstar he would become after Terminator 2: Judgment Day.

When I first started conducting and writing interviews in the 1980s, I had no journalistic experience and no idea what I was doing, hence the somewhat wayward results. On the other hand, there was room for manoeuvre, unlike nowadays, when all but a few celebrity interviews are little more than glorified press releases. I don’t think this interview resembles a press release. I have retro-edited it to delete some of my more embarrassing writing mannerisms, including distracting overuse of  italics and (brackets) and repeated efforts to appear cleverer than I am. Schwarzenegger’s words, however, have not been changed.

In light of subsequent allegations of sexual harassment made against him, I should add that at no time during the interview did I feel threatened, importuned or sexually harassed. Slightly embarrassed, perhaps. But then I did lead him on a bit: I wanted saucy, and saucy is what I got. 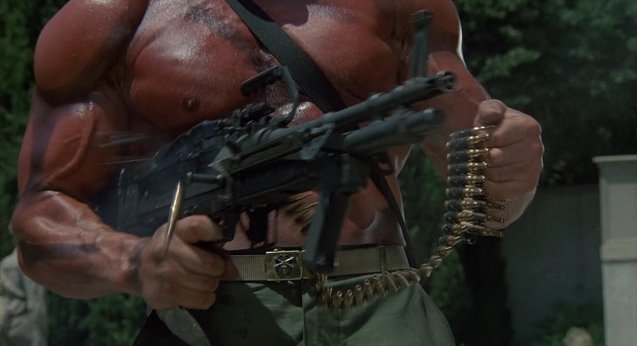 In Commando, Arnold Schwarzenegger plays a character called Colonel John Matrix. When Matrix first appears, he is carrying a tree trunk. Arnold’s own trunk and attachments have won him five Mr Universe and eight Mr Olympia titles, but when his musculature is clad in slightly sportif leisure-wear instead of bulging out of a Para-Rescue combat vest trimmed with grenades, it looks relatively normal. Except for his arms, which look a little bit short. This is an optical illusion. They are not short; they are very, very wide.

I compliment him on his performance on last night’s Wogan; he seems to thrive on the chat-show set-up. “Talk shows is one of several ways of promoting the film,” Arnold says. “I enjoy it because it’s not scripted. They ask anything they want, and I answer any way I want.” 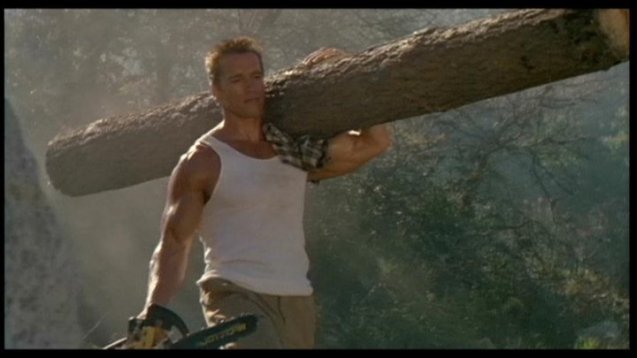 Arnold was born in Graz, Austria, in 1947. He took up bodybuilding when he was 15. I ask, “Was that because you were getting sand kicked in your face?”

‘There is no sand in Austria,” Arnold replies. His rather charming accent is just one of the many interesting aural effects to be heard in Commando. Apart from all the kerrunnch kersplat noises, there is also the Australian accent of bad guy Vernon Wells, best known as Wes in Mad Max 2. We’ve come a long way since distributors dubbed the original Mad Max into Americaspeak for US audiences.

“People are from all over the world in reality,” Arnold says. “There are people in the FBI that are not American-born; they may be Mexicans and Germans and so on; you just have to be an American citizen. If you’re born somewhere else you always will have somewhat of an accent, except if you go and train yourself to get rid of it. I had no special interest in getting rid of mine.”

A lot of people get blown away in Commando. How does Arnold think his film differs from Rambo: First Blood Part II? “Have you seen both movies? You can see the difference? Good. Ha ha. I was worried for a moment… It’s a different movie. Mine is a battleground right in Los Angeles. Stallone’s battleground is Vietnam. His is a very politically oriented movie and mine is not at all. Mine is humour oriented. You can laugh and you can have a good time with it, and I don’t take myself seriously in the film either. I believe in comic relief, otherwise the whole thing becomes too intense and too heavy.”

The comic relief in Commando comes mainly from the female lead, Rae Dawn Chong, who says things like, “I don’t believe all this macho bullshit,” as the bodies hurtle past. This is also a far cry from Ramboworld, where the female character is introduced primarily  so that she can get shot and give Rambo something else to grit his teeth about. Arnold and I begin to discuss the role of women in action movies.

“In most action movies the women are in the way,” says Arnold. “We always intended to have Rae Dawn Chong as being the funny, kind of bubbly girl, as just the innocent bystander, and whoops what’s going on here, there’s a bullet flying by, type of thing. She was always meant to be that. And then it works, if she has a real job in the movie. But if you try to throw a woman in there just to have a love scene, you’re wasting your time, because it doesn’t sell a ticket.”

The Jewel of the Nile works, says Arnold, because there is teamwork between Michael Douglas and Kathleen Turner from the beginning. Runaway Train, in which Rebecca de Mornay plays a female machinist, does not work. Linda Hamilton in The Terminator works. “She becomes the hero at the end and all that. That is terrific. Give the woman the ultimate responsibility. But don’t throw her in. As an object. To sell tickets…” He sniffs the air. “What perfume do you use?”

“That reminds me,” says Arnold. “My mother (who lives in Austria) told me that whenever I sent a gift, I should write ‘GIFT’ on the package so she wouldn’t have to pay taxes on it. And so one time I sent her a little package, a pearl necklace. And I put on it ‘GIFT’. And so they confiscated it, because ‘gift’ in German means poison. They were freaking out over there – Arnold has sent his mother poison!”

He thought Pumping Iron II: The Women was “wonderful”. “George Butler [director of Pumping Iron II and co-director of Pumping Iron] is a very talented guy. Also what I liked about it is the whole question he raised of how they should be judged. They’re not sure within the Federation, you know. As far as I’m concerned, women should be judged on muscles the way the guys are. You shouldn’t say that women have to be feminine. In shotputting and in javelin throwing and in all those kind of sports, you don’t have a woman throwing the shotput a different way because she’s a woman, in a feminine way or a womanly way, wriggling their asses a little bit or doing it in a sexy way.”

Arnold feels that women ought to train and stay physically fit, “because women are now in many of the same jobs as men have. I mean, they work for the fire department, the poilce, the military, they do physically hard jobs. And stresswise, even if you are a journalist, or an accountant and not working physically hard, stress itself is the same as the guys working in the same job.”

Anrold spends about an hour a day exercising, but he no longer “pushes” himself to break the muscle barrier. “I did all my pushing when I was young. Now I’m just trying to stay in shape: cardiovascularly and energywise, so when I do films I can do the stunts and be agile.”

“Do you ever have trouble finding clothes that fit you?”

“I get most of my stuff made. I have to say that the new fashions are very loose. This shirt I never could have gotten five years ago. Now you go in there and they look like nightgowns, the way they hang. Now a lot of things fit. Suits I still get made. I don’t like the Chaplin-style suits, all very loose, they hang like a bag.” 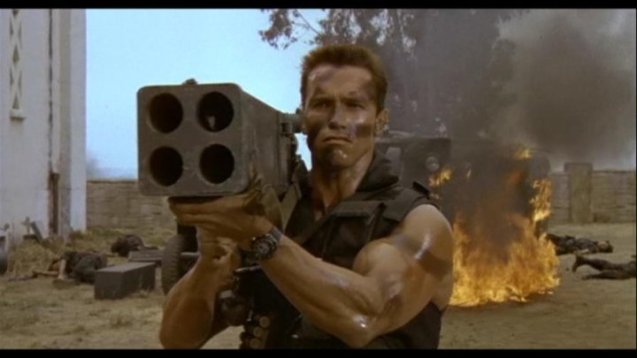 The PR person is talking on the telephone in the next room. Arnold gets up and closes the connecting door. Suddenly he seems very big.

“I love this black you’ve got on there,” he says, sitting down again. “You wouldn’t believe how much I love women in black.” Arnold’s voice has switched into playful mode. He is being a trifle saucy.

“Who knows? It’s just one of those things. It’s sexy. It’s the outline – the white skin, and the black.”

My face is no longer white but several shades of scarlet, but I lose no time in telling Arnold about my incurable and incredibly disfiguring skin disease which has imprinted a crimson floral motif on various parts of my otherwise white skin.

I tell him I think it’s probably stress-related and would perhaps benefit from a course of bodybuilding. But Arnold is not thrown. Arnold could never be thrown.

“I think white skin is sexy. I don’t like women who get really dark, you know, the tan. It takes a little bit away from the feminine look, I think. It’s all a matter of opinion. My friends, they like blonde girls with dark skin and, er, huge tits. And I love nice round asses and I pay no attention to tits, really.”

“No. I do sing. As a matter of fact, people always have me sing at parties when they want to get rid of their guests. They say, ‘Arnold, sing Happy Birthday or something,’ and then all the guests run out.”

Arnold has no idea what his vital statistics are. “Do you?” he retorts. “You never stand in front of the mirror with a tape measure and measure your chest? So you don’t know what they are? I don’t. I never measure myself. I have no interest. Why should I want to know?” So he can tell me how big his biceps are? “My tailor needs to know. I don’t.”

And now. The question I’ve always wanted to ask Arnold Schwarzenegger. “When you’re in an intimate situation with someone, how do you avoid crushing them?”

“There are a hundred different ways to avoid that,” Arnold replies. “Those are situations that I couldn’t explain because it would take too long. The next time, what I’ll do is I will bring a film or videotape of me banging somebody.”

I observe that such a film would do enormous box-office.

“Right,” he says. “Put it this way, I’ve never crushed anybody, and I’ve never had any complaints. This is for… Time Out? I looked at the schedule when I arrived yesterday, and I read Time Out and I said to the girl, ‘This is terrific – here’s an hour break and then we have lunch,’ and she said, ‘No no no, Time Out is a magazine.'”

Arnold will shortly be starting work on a science fiction movie called Hunter [the working title of Predator]. “And we will be finished in June and in between that time I get married. So it will be quite interesting how we’re going to fit all this in. But that’s the fun part of it… Do you sometimes wear black garter-belts?”

VINCENT GALLO VERSUS THE CRITICS

LOUISE BROOKS AND ME

6 thoughts on “SCHWARZENEGGER: THE 1986 INTERVIEW”