No point in compiling your Top Tens at the same time as everyone else, right? So here, belatedly, is my List of Favourite Films of the Noughties. I don’t suppose there are any surprises here. If the following movies have anything in common, it’s that they all plunged me into perfectly formed worlds and didn’t let me out again till the end. Two are explicitly about dreaming, but all have dreamlike qualities. None has the standard Hollywood three-act plot, there are no superheroes and the special effects aren’t distracting. If there’s an odd-film-out, it’s the last one; but since some of the others are pessimistic to the point of existential crisis about the human condition, I think I’m entitled to a bit of a laugh.

THE ASSASSINATION OF JESSE JAMES BY THE COWARD ROBERT FORD (2007)

Each generation gets the Jesse James it deserves, and this magnificient western directed by New Zealander Andrew Dominik is a sideways look at today’s celebrity culture. It’s deliberately paced by contemporary standards, low on physical action (though set-pieces such as the early train robbery, when they come, are expertly handled and deftly used to reveal character) but brimming over with psychological complexity, period mood with folksy narration and Roger Deakins’ mesmerising cinematography. It also packs a brace of terrific performances; Brad Pitt, perfectly cast, proves he’s not just a pretty face as the dangerously unpredictable outlaw, already a legend in his own lifetime, and Casey Affleck is creepily ingratiating as the hero-worshipper giving off Mark Chapman vibes.

Kiyoshi Kurosawa’s ghost stories don’t just reflect the malaise of modern life, they also scare the shit out of you. A university student commits suicide, but his shade can still be glimpsed in his apartment. His friends (if you can call them that – everyone in this film seems disconnected) start disappearing, leaving their outlines burnt into walls like the shadows of Hiroshima victims; a floppy disc promises a connection to the afterlife, computers seem to be literally sucking the souls out of their users, and there’s one of those herky-jerky ghosts that became ubiquitous after the success of Ringu. The sense of dread is palpable, and the fact that you don’t know what the hell is going on makes it even more frightening. Kurosawa’s film turned up in the UK five years after its release in Japan (and France, where I saw it), by which time everyone was getting blasé about Asian ghosts, but this is a key work, one of the best. (The Hollywood remake, Pulse, was piss-poor even by the standards of Hollywood remakes, not to mention a criminal waste of the lovely and talented Kristen Bell.)

This little Swedish film, adapted by John Ajvide Lindqvist from his own novel, is the perfect antidote to the sparkly vampires of Twilight; it’s not just the best vampire movie since Near Dark but arguably the best horror film since the genre’s last great flourishing in the 1970s. The setting is a Stockholm housing estate in the early 1980s; lonely 12-year old Oskar, who’s bullied at school, hopes to make friends with the girl who moves in next door. There’s more to her than meets the eye, of course, but as these two outsiders forge a curiously innocent bond, you’ll find yourself rooting for them against the rest of the world. Director Tomas Alfredson favours mood and slow, stealthy camerawork over gimmicks and shocks; the results are simultaneously touching and troubling, and, just occasionally, horrifying. I liked this film so much I wrote a book about it; it has yet to be published, but watch this space for details. The Hollywood remake, Let Me In, wasn’t bad, had a couple of great scenes, and has its devoted fans. But it was just so… unnecessary.

MASTER AND COMMANDER: THE FAR SIDE OF THE WORLD (2003)

Around the time of this film’s release, certain men of my acquaintance developed the habit of repeatedly murmuring the first part of the title as though it applied to them personally. Peter Weir’s exemplary conflation of two Patrick O’Brian novels (expertly adapted by John Collee) offers you a rare opportunity to immerse yourself in the virtual reality of another era and place – on board the HMS Surprise, off the coast of South America in the Napoleonic Wars. Russell Crowe and Paul Bettany are on splendid form as mismatched duo Captain Jack Aubrey and his nature-loving pal Dr Stephen Maturin. Booming cannons, stormy weather, impromptu surgery, tactics, superstition, sea-shanties and not a single duff note; it lasts 138 minutes, but I could have watched it all day. This is one movie of which we’d like to see multiple sequels – but they would have to be made by the same dream directing-writing-acting team.

Whoever said that watching films was like dreaming with your eyes open might have been talking about David Lynch’s movie, which began as the pilot for a rejected TV series (hence the loose narrative ends) before being reworked into something deeper and much, much darker. After a car smash on the eponymous Los Angeles road, a brunette with amnesia (Laura Elena Harring) teams up with a perky blonde (Naomi Watts in a stunning performance – it might not seem so straightaway, but just you wait) determined to make it big in Hollywood. What starts out like a Nancy Drew mystery develops into a nightmarish imbroglio of Freudian keys, auditions, rotting corpses, hot lesbian sex and a sinister cowboy. Even if you can’t always get a handle on the plot, the director’s masterly evocation of dread and a nagging sense that things are out of joint will keep you hooked, even while you’re scratching your head. Multiple viewings are not just a good idea – they’re absolutely necessary if you want to get hit in the solar plexus by the story’s full poignancy. 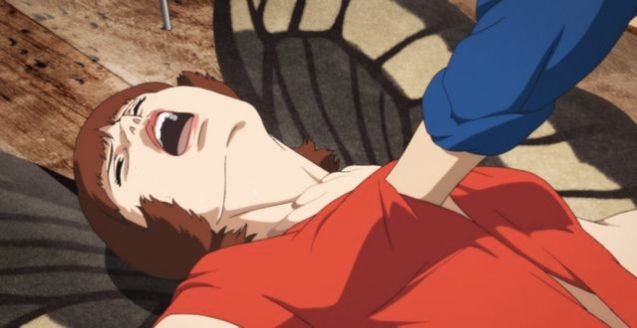 It’s always sad when a beloved film-maker passes away, but I don’t think I’ve ever actually wept the way I did in 2010 after hearing of the death, at the ridiculously early age of 46, of Satoshi Kon, whose animated work I’d confidently been expecting to accompany me into my old age. (Here are his last blog entries, if you feel up to it – probably NSFW unless you have no objection to your co-workers seeing you sobbing.) The film’s tagline – “This is your brain on anime” – only hints at the multiple levels in a plot about a lady scientist investigating the theft of a device allowing therapists to enter their patients’ dreams. If you thought Inception was clever, get a load of the dreamworlds on display here, with their jolly but sinister parades of toys, homages to a wide variety of cinematic genre and constant narrative rug-pulling that makes you continually question whether what you’re watching is real or imaginary. And Paprika, unlike Inception, doesn’t shy away from dreaming’s sexual undercurrents; at least one scene here is a troubling variation on sexual assault.

“Are you watching closely?” You’ll have to pay attention if you want to keep up with Christopher Nolan’s yarn about stage magicians whose escalating rivalry takes a turn for the deadly in turn-of-the-century London. Christian Bale and Hugh Jackman, both impeccable, are ably supported by Michael Caine as an “ingenieur” and David Bowie giving a lifetime best performance as the Serbian-born physicist Nikola Tesla, whom Jackman consults in a bid to outdo Bale’s most celebrated illusion, “The Transported Man”. As fans of Memento will tell you, Nolan (with brother and co-writer Jonathan) is a master of the intellectual roller-coaster; this adaptation of Christopher Priest’s novel is a multi-layered imbroglio of flashbacks within flashbacks, narrative sleights of hand and tour de forces of cinematic showmanship – it’s like a fabulous magic act in itself, with a final revelation that may disappoint some with its banality and obviousness, but which struck me as the perfect punchline to this most engrossing of shaggy-dog stories. I could maybe have done without Scarlett Johansson as a magician’s assistant, but even she’s not enough to spoil things. A pity Inception didn’t live up to this – Nolan is a brilliant architect of worlds, but maybe he needs help with the nuts and bolts of the storytelling. 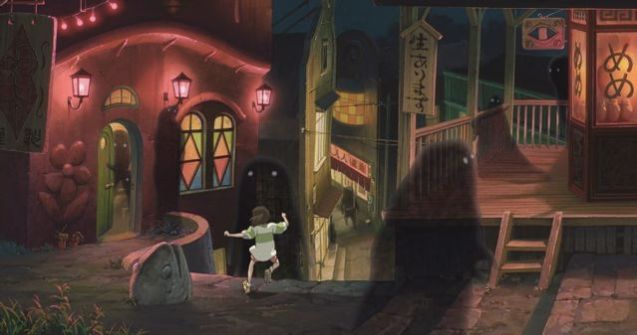 If the noughties saw the flowering of a new golden age of animation, then Hayao Miyazaki’s extraordinary Oscar-winning fantasy, a blend of traditional cel animation and computer techniques, must be Exhibit Number One. A whiny 10-year-old girl called Chihiro (the French title was Le voyage de Chihiro), disgruntled at the prospect of moving house, passes through a mysterious tunnel with her parents, who are promptly turned into pigs, leaving their daughter to fend for herself in a strange world populated by wraiths, witches, bouncing green heads, a monstrous baby and a dragon-boy called Haku. This Japanese spin on Alice in Wonderland was neither the first anime I’d ever seen, nor even my first Miyazaki, but it was the film that sealed the deal, and which launched me on a quest to watch or rewatch everything by him and his associates that I could find. Like so many Studio Ghibli films it plunges you into such a strange and wonderful dreamworld that emerging from it at the end is an almost physically painful wrench. 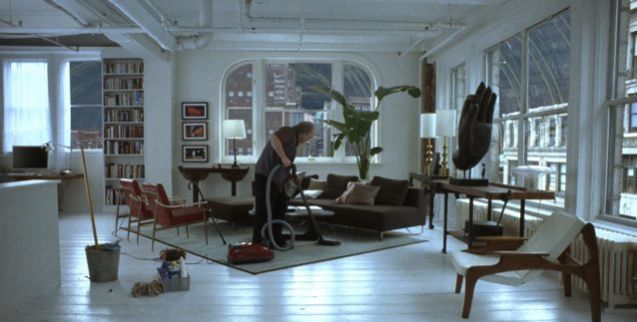 Screenwriter Charlie Kaufman doesn’t shy away from the big themes in his directing debut: this is about life, death and the bits in between. Philip Seymour Hoffman plays a neurotic theatre director who spends years constructing a detailed simulacrum of his life in a vast hangar, with actors playing himself and all the people he knows. As time passes, the story starts folding back on itself, and the border between reality and theatre becomes increasingly hazy. The result is like an elaborate but only half-remembered dream seeded with surreal and satirical touches; Hoffman’s wife (Catherine Keener) paints pictures which can only be seen through a microscope, while his mistress (Samantha Morton) buys a house which is perpetually on fire, though it never actually burns down. Metaphor alert! I think – because the beauty of the film is that you ending up wondering if the metaphors are themselves metaphors. It’s strange, sad, sometimes funny and oddly beautiful. All of human life is here, though maybe you need to have lived a bit already for any of it to make sense. 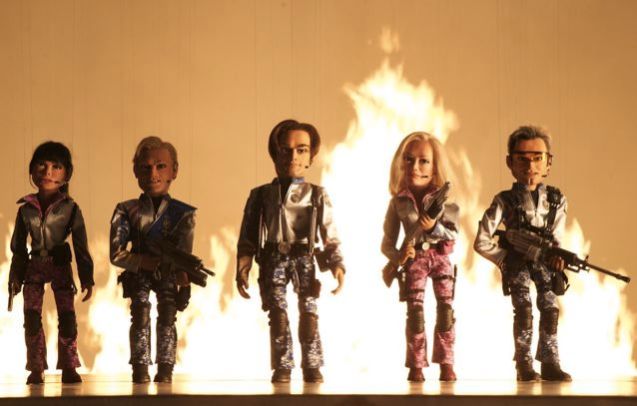 From Matt Stone and Trey Parker, the guys who brought you South Park, comes a puppet film which makes Thunderbirds look like a team of pussies. It’s a scabrous, tasteless send-up of Hollywood action movies – complete with sex and violence, bigotry and extensive vomiting – all done with marionettes. Watch our heroes trash Paris, Cairo (“That’s in Egypt”) and the Film Actors’ Guild (“FAG” for short) in the war against terrorism. Listen to Kim Jong II singing, “I’m Ronery” and arab terrorists babbling “durka mohammed jihad” as they launch their WMDs. Watch Hollywood lefties come to gory ends, and never let it be said that Stone and Parker are not equal opportunity offenders. Hilarious, and pretty much the action movie to end all action movies. Except that it hasn’t ended them – they’re still being churned out, and they’re still using the exact same clichés.

5 thoughts on “FAVOURITE FILMS OF THE NOUGHTIES”