“I did it for myself”. It’s a recurring phrase you often see or hear in the personal testaments of some of the 22,030 women who, according to the British Association of Aesthetic Plastic Surgeons, have undergone breast augmentation surgery in the past four years. Year by year, we’re told, their numbers are on the increase.

If you were one of those 22,030 women and you said this, I’m sorry, but I think you’re deluded. Perhaps you didn’t get breast implants to try and make yourself more attractive to men (which is so pathetic a justification I can’t imagine anyone ever admitting to it anyway), but you have certainly been brainwashed into thinking that a certain type of physique is the ideal, and that your life won’t be complete if you don’t conform to it. Well, it’s a free country, so go ahead and get your breasts enlarged, if you must. Just don’t go looking for my respect as well.

Maybe you saw pictures of Victoria Beckham or Lindsay Lohan or Carmen Electra, and thought, “Hey, wouldn’t it be great to have breasts like those?” If this was indeed the case, you clearly need an eye-test. Though you’re not alone; each new manifestation of demented celebrity knocker enlargement seems to be met with less of the derision it deserves. Once upon a time, unfeasibly large mammaries were the province of strippers, or of actresses in kitsch softcore movies directed by Russ Meyer, but nowadays even Erica Gavin in Vixen! or Tura Satana of Faster, Pussycat! Kill! Kill! are being comprehensively outbosomed by the likes of Famous-for-Doing-Nothing or Bazooma Baywatch or Chantilly from the latest dimwitted TV reality show. Simply by dint of featuring in so many photos, freakishly large bazoomas that are completely disporportionate to the rest of a woman’s anatomy are starting to be thought of as the norm.

Even if your surgical expansion is limited to a cup-size or two rather than the full Boobzilla, I still think you’re nuts. I can understand seeking breast reconstruction after a mastectomy, or surgical reduction of breasts so big they cause back pain. But submitting to a medically unnecessary procedure simply to bolster self-esteem is madness; if your self-esteem really is that low you’d be better off seeing a psychotherapist, or even just buying a new lipstick. And no, it’s not the same as dyeing your hair, or getting your teeth fixed; every operation carries a risk of infection, bleeding, scarring. In any case, there will be pain, and the impact on your bank balance will be excruciating as well; the average cost of implants is around £5,000. Blimey, if you were so dead set on having a more prominent rack you could buy a gel-filled Wonderbra and still have $4,080 change to spend on holidays, mortgage repayments and sandwiches.

And it’s not as though it ends there; even after the op you will need to pay for regular screening to detect leaks or ruptures in the implants, and you may well require further surgical procedures to deal with problems such as “capsular contracture” (tightening of scar tissue resulting in hardening, rippling and other unwanted changes), wrinkling, asymetry or malposition. Mammograph results will be less reliable, and should you decide to have children, congratulations, you have reduced your chances of being able to put your breasts to the use for which nature originally intended them – breastfeeding your babies. Moreover, since implant surgery can cause irreversible nerve damage and consequent decrease in sensitivity, you may well be depriving yourself of sexual pleasure as well. So is the way you look so much more important than the way you feel? If that really is “doing it for yourself”, it sounds perilously close to masochism.

And just look at the things! Since when did it become aesthetically pleasing to have what looks like two halves of a melon bolted on to your chest? Some women describe their ops as “breast-lifting” rather than augmentation, but you can’t help suspecting they’ve spent so much time studying photos of fake celebrity chests they’ve forgotten what real bosoms look like. A bit of droop is par for the course, unsightly only to those whose physical ideal is a plastic Barbie doll. When you lie on your back, your breasts should seem smaller and floppier; they’re not supposed to stick straight up into the air like ice-cream cones, for heaven’s sake.

And what is this obsession with bigger bosoms anyway? In my experience most men (and OK, yes, a lot of women too) like tits, any old tits, in any shape or form; this preoccupation with size, beyond the obvious remit of the dedicated breast fetishists, is primarily a girl thing. It’s often assumed that small-breasted women are envious of their more fulsomely endowed sisters, but this is a myth, probably put about by those trying to justify their surgically enhanced mammaries; I have friends with naturally spectacular cleavage, and they look fabulous… but I’ve never for one moment wanted to be like them, nor have any of the other smaller-chested women I know. We like being able to sleep on our tummies. We like people looking us in the face as we talk instead of staring fascinated at our décolletage. We like being able to tap-dance or play badminton without banging ourselves on the chin. We like not getting backache. And we especially like the option of being able to go braless, every now and again.

Ah yes, bras. The brassière (invented towards the end of the 19th century by either Herminie Cadolle or Marie Tucek, depending on which history of underwear you happen to be reading) is a relatively recent development in women’s fashion. In the 20th century its design, which supported the breasts from the shoulders instead of, like a corset, constricting the torso to force them upwards, has been instrumental in the pumping up of the breast into a primary fetish zone, despite the occasional vogues for flatter chests which, historically, have tended to coincide with periods of female emancipation – the flat-fronted flapper of the jazz age, or the skinny Twiggy silhouette of the 1960s. 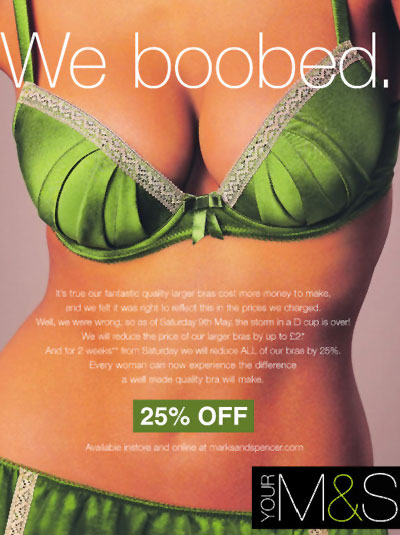 But ever since 1994, when Eva Herzigova stopped traffic with her “Hello boys!” Wonderbra ad, it has been bosoms a-go-go, and they’re on the increase. Marks & Spencer now stock GG, HH and J cup sizes, and Bravissimo, purveyors of bras for even larger ladies, offers a K. A lot of this may be due to an all-round increase in obesity, of course, but the average bra size has reportedly jumped from a mere 34B during the 1990s to 36C. It sometimes seems to me as though lingerie manufacturers (and the market is worth more than £800 million in the UK alone) are conspiring with plastic surgeons and tabloid newspapers to promote the idea that bigger is better – and women are falling for this nonsense.

Whereas, less than a decade ago, the likes of Calvin Klein and Lacoste sold simple yet elegant stretchy camisole-type bras that contained the bosom rather than forcing it up and out, these are nowadays virtually impossible to find (and believe me, I’ve hunted for them) leaving us small-breasted women stuck with a choice between armour-plated sportswear and underwired confections that restrict the breathing (just try doing a yoga exercise in one of these) and package the breasts like fancy Easter eggs in scratchy, preformed cups that never seem to fit properly, no matter how many professional fittings you get. Brassieres in general may be an advance on the bone-crushing, organ-deforming, breath-constricting corsets that preceded them, but beyond considerations of comfort (and I can see why you wouldn’t want to go jogging without strapping yourself up) they are not strictly necessary. Age, exercise, weight and childbearing all have more bearing on the droopiness of your breasts than whether or not you wear a bra.

As for subjecting yourself to a medically unnecessary surgical procedure in the hope of conforming to an  unfeasibly va-va-voom silhouette, it’s surely not so very different from allowing yourself to be laced into a garment that deforms your ribs and internal organs in the hope of ending up with a 10-inch waist. One hundred years of feminism, and women still hate their bodies. Why otherwise would they be subjecting themselves to this sort of tragic mutilation?

This is an edited version of a rant piece I wrote a few years ago for a women’s magazine, which subsequently rejected it on the grounds that my tone was too aggressive. (No! Surely not!) Please be advised that the statistics are now out of date, though they were accurate at the time of writing.

But I still have a problem finding nice stretchy bras without wiring or pre-formed cups for everyday wear; my only friends in this area are Sloggi, which does a basic black or white, and Sweaty Betty’s ultra-comfortable exercise crop-tops in a wide range of bright colours.

ETA: my latest solution is sports bras from the Dutch/Belgian chain store Hema. Not nearly supportive enough for vigorous sporting activity, but no padding or wiring, and perfect for comfortable daily wear. And only eight euros a pop. Unfortunately they’ve started adding stupid slogans such as LET’S GO and RUN THE WORLD, which I refuse to wear, so maybe I should stock up on the non-slogan ones.