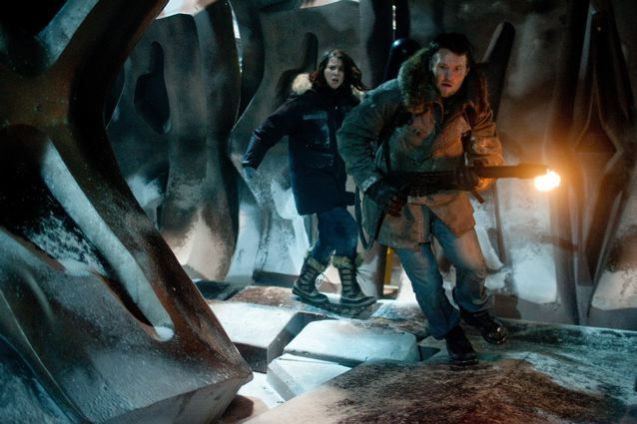 I know. It’s like shooting fish in a barrel. But what can you do? I might have got a few of the finer details wrong because I watched it in Kinepolis in Northern Brussels which is basically Cinema Hell, knee-deep in smelly popcorn and mewling children. And of the dozen or so people in my audience, at least half of those were adolescents suffering from ADD who chattered loudly and kept running in and out of the cinema. So it was quite difficult to concentrate. But please be aware there are

MAJOR SPOILERS HERE!
(and thanks to Phelim O’Neill for the mouth-chests.)
THE EXPOSITION 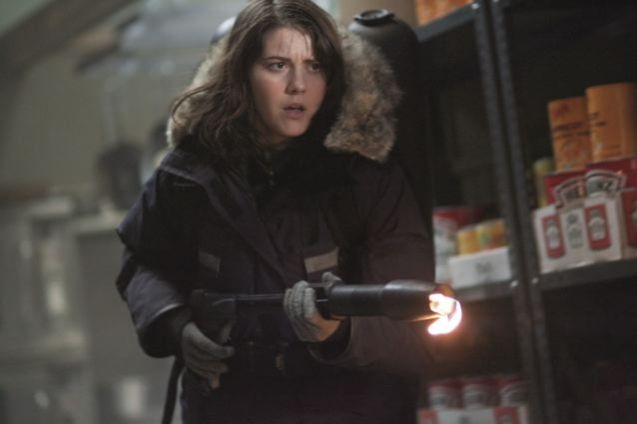 Hello, my name is MEW and I’m going to be the heroine of your film, which is why there’s a scene near the beginning (I don’t think it’s in Antarctica, but I missed that bit because of the adolescents with ADD) where I’m doing palaeontology-type things. It’s so you know who I am. And that’s what was missing in the 1982 film – I don’t think you ever got properly introduced to those guys, they never ever actually said Hi, I’m a chopper pilot, or Hi, I’m a dog handler, or a geologist, or radio operator or whatever; you just see them doing whatever it is they do, so that’s probably a bit hard for audiences to grasp, they need to be told stuff like that, over and over again. And you definitely need to know I’m a palaeontologist, because otherwise you might mistake me for a schoolgirl. Yes, I’m that young. Hey, I could almost be just out of kindergarten! But be thankful you’ve got me instead of some old woman who might be better qualified and have more field experience, but who hey, wouldn’t be nearly as HOT and appeal to the young male demographic.

Also we get introduced to Bad Scientist Guy (a descendant of the Bad Scientist in Christian Nyby’s 1951 The Thing From Another World who wears a roll-neck sweater and wants to communicate with the creature, instead of killing it). Bad Scientist Guy says, “I need a palaeontologist.” Which is what I am, I think we may have established that already, but we should probably establish it again because it’s a difficult concept. And I say something like, “I need to know a little more about this,” and I think there’s a bit more explanation here in case spectators came in late and missed the earlier scene where some Norwegian guys find something in the ice in Antarctica, and so we set everything up again and hint that Bad Scientist is really excited about it. You can’t explain these things too many times, especially if there are adolescents with ADD running all over your cinema.

And then we get the journey to the camp in the helicopter. Just so we know these guys are helicopter pilots. I mean, the 1982 film jumped straight in without any of this useful scene-setting. And where’s the fun in that? 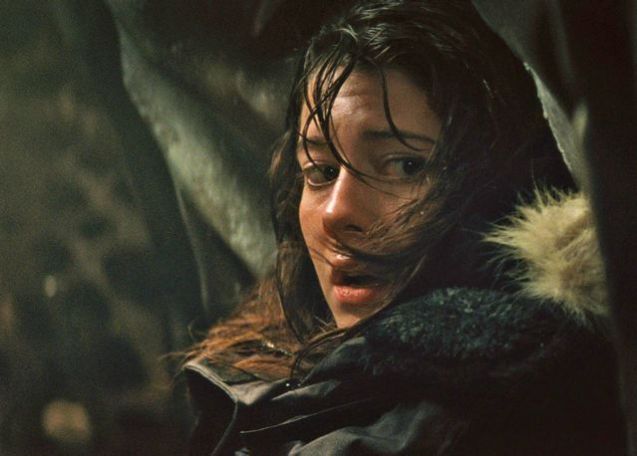 The 1982 film didn’t have any female characters at all (unless you count Kurt Russell’s computer chess game which had a female voice) so obviously that had to change. And I know it’s 1982 and all that, but audiences like their female characters not just to be cute but also to be smart and kickass, like Ellen Ripley in the Alien films. I know in Alien it was established early on that she was second-in command on the Nostromo and anyway, that was the Future, but I don’t see why we shouldn’t retrofit those non-sexist attitudes on to a bunch of manly Norwegians in 1982 who have been holed up in an isolated place without sex.

I realise that in real life, the best-case scenario would be them expecting me to make the tea all the time, and the worst-case scenario would be the sort of unpleasant misogyny routinely dished out to the heroine of George Romero’s Day of the Dead. And it’s quite likely at least one of those guys, back in 1982, would normally have tried to feel me up or made sexist or condescending or even threatening remarks. But hey, we’ve got a good old-fashioned monster mash-up here, so why worry? These men will realise straightaway that even I look like a 15-year old schoolgirl I’m actually very capable and smart and know better than they do, so every time I say anything they’ll all shut up and pay attention, and they’ll take everything I say very seriously, even if it does sound outlandish, because I’m so smart it takes me only a fraction of the time it took Blair and the others to work out what was going on in the 1982 film, and so the rugged Norwegian guys will be happy to let me take over as a leader and order them around when there are Things on the loose and people start killing each other. Put a flamethrower in my hands (which I immediately know how to use even though I am, as has already been explained, a palaeontologist) and I, MEW, am a perfectly acceptable substitute for Kurt Russell. Even though I may look like a 15-year-old schoolgirl.

Oh there’s a weepy Norwegian woman in there too. Just in case you might be tempted to think I’m a  token female or anything. 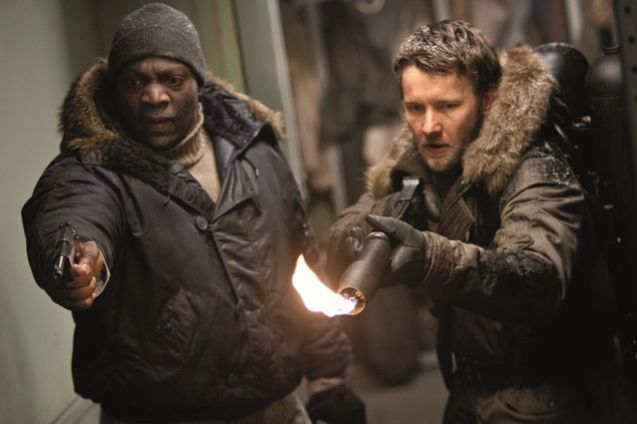 The male characters in the 1982 film were far too dissimilar. And where’s the fun in that? Surely it’s much cleverer to have them all look identical, blond and bearded and with no discernible personalities, thus making a pertinent point about human beings all being the same even before they get Thinged. For a while, I thought I could tell Bad Scientist Guy apart from the others…. but no, he’s blond and bearded too. Even Joel Edgerton, the only other cast member apart from me, MEW, who might conceivably be recognisable to people who watch a lot of films, is kind of blond and bearded. Thank God for the Afro-American helicopter pilot, who sticks out a mile. And me, MEW, of course. I stick out a mile too. Even though the men immediately accept me as one of them. 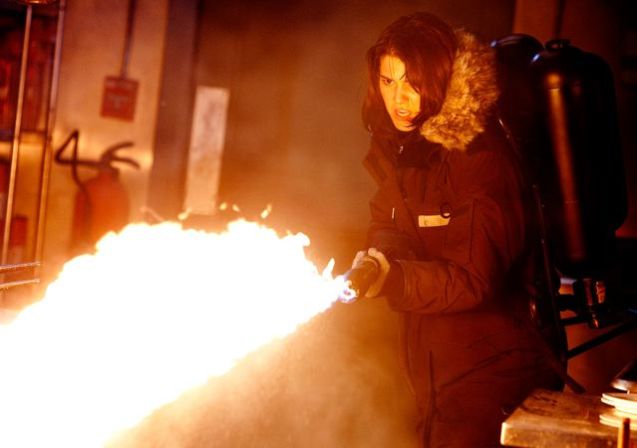 In the 1982 film, the Thing tended to lie doggo, trying to pass for human until attacked, when it erupted into ever more elaborate configurations to try and protect itself – dogheads splitting open when the other dogs growled at it, mouths opening up in stomachs to swallow the hands that were assaulting it with a defillibrator, legs extruding from a severed head to it could run away and hide. But where’s the fun in that? The 2011 Thing sprouts mouth-chests at the drop of a hat, even when it’s not being directly threatened. Then it chases people down corridors like the psychopath in a slasher movie. Then it sneaks around a kitchen like the velociraptors in Jurassic Park. Then, evidently having absorbed some Alien DNA, it sprouts sharp probosci on which to impale people, or sheds Facehugger-type appendages that drop on them from above. You see? MUCH more fun.

Oh yes, we’re in Antarctica, so I think I’ll just pop outside and wave at that helicopter WITHOUT PUTTING MY COAT ON. And oh, any one of you could be a Thing, so hey, let me just STICK MY HEAD IN ALL YOUR MOUTHS TO SEE IF YOU HAVE FILLINGS. Because, you know, Things can’t reproduce metal or something, though they don’t appear to have any problems with clothes or zips or whatever. And oh look here’s an alien spaceship embedded in the ice, I think I’ll just POP DOWN AND EXAMINE IT FROM REALLY CLOSE QUARTERS. And it doesn’t matter if I fall into one of those open flaps into the ship because I can easily find my way out again before it takes off, or its engines ignite and burn me to a crisp or anything.

This is supposed to be a prequel, not a remake. But why think of new stuff when the old stuff will do just as well? The melting ice block from the 1951 film. The malfunctioning flamethrower. The characters who are treated with suspicion because, logically, they shouldn’t have been able to survive either the cold, or a helicopter crash, or both. The icky noise that alerts a character to someone going full-on Thing just behind him or her. Testing all the characters, one by one, for incipient signs of Thinginess. The poorly character who turns out to be not as poorly as you think.

You know when the Norwegians blow a big hole in the ice with their thermal charges? Well, none of that matches up. And how about when the Thing wakes up suddenly, as you do, and leaps out of the block of ice the Norwegians have taken back to their camp? Here we really get to show the Thing’s uncanny abilities when it leaves a perfect oblong hole in the ice it has just leapt out of.

And oh look, here’s a husky! Suddenly leaping out of a window! Now where did he come from? How come no-one had used the dogs to try to get away? Or the snowcats, come to that – there seem to be loads of them around. In fact, these guys seem fairly mobile.

Here’s a thought for screenwriters: why not work on your characters a bit? (And that includes the Thing itself.) Don’t just have things happen because you’ve seen them happening in another film.

That’s not all, I could write about the CGI or the way no-one really looks cold the way the did in the 1982 film. But I can’t be bothered to go on. I’ve already wasted too much time on this Thing.

ps I liked John Carpenter’s The Thing so much I said so in a book which in 1997 was published in the BFI Modern Classics series.

Me writing a couple of years ago in the Guardian about the original critical reception of John Carpenter’s The Thing.

36 thoughts on “SIX REASONS WHY THE THING PREQUEL IS BETTER THAN JOHN CARPENTER’S 1982 FILM (spoiler: I don’t really think this)”