The 1980s had been a relatively quiet decade in vampire cinema, with films like Fright Night, Vamp and The Lost Boys skewing the subgenre towards teens, special effects and lowbrow comedy, and only Near Dark developing it in an interesting grown-up way.

At the same time, somewhere below the radar of highbrow literary commentators and the mainstream book pages, vampire fiction was continuing to flourish; Anne Rice’s Vampire Chronicles were becoming increasingly stodgy with each new volume (but establishing roots for the massive boom in Dark Romance that was just around the corner) while writers like Chelsea Quinn Yarbro, Suzy McKee Charnas, Robert McCammon, George R.R. Martin and John Skipp & Craig Spector were all exploring the vampire myth in imaginative ways.

But in the early 1990s vampires were finally beginning the big crawl out of the generic shadows and into the mainstream limelight (and since that’s technically nothing like daylight, it wasn’t going to burn them up). Francis Coppola’s Bram Stoker’s Dracula, the film version of Buffy the Vampire Slayer (which would put the seal on the deal when Joss Whedon remodelled it as a TV show a few years later) and the BBC’s The Vampyr: A Soap Opera (a trendy update of Heinrich Marschner’s 19th century opera) brought bloodsuckers to the attention of ignorant snobs who like to sneer at horror fiction the mainstream media and also happily coincided with the publication of my own vampire novel, Suckers (now available for download as an e-book) as well as Kim Newman’s Anno Dracula. So we got to talk about vampires and publicise our novels too.

The following clip is from 1993; it’s a BBC daytime show called Behind the Headlines, introduced by Linda Agran. The guests are Christopher Lee, Nik Fiend of the “deathrock” band Alien Sex Fiend (and a really lovely guy – afterwards he sent us copies of the photo at the top of this page), Kim Newman and me. Note the width of my shoulders; apparently this was quite a normal look for the era, though now I think it makes me look like a cross between a stunted stevedore and a small American football player. 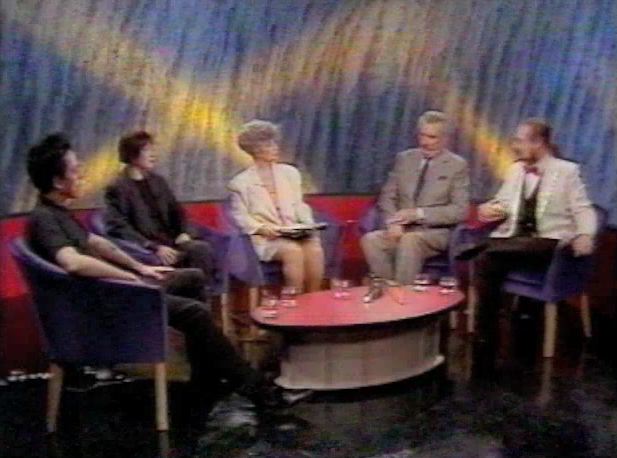 CHRISTOPHER LEE TALKS ABOUT VAMPIRES from Anne Billson on Vimeo.

Apologies for the crappy quality of this video, which goes a bit wibbly here and there. What can I say? It’s old technology, transferred by a non-expert from home video to digital video to iMovie to Vimeo. The entire clip is about 15 minutes long.

(Also, my vampire novel Suckers is available as a paperback or e-book. Tell your friends. I have also written books on the Swedish vampire movie Let the Right One In and on the TV show Buffy the Vampire Slayer.)