I’m telling, you, it was THIS big.

In 1998, Sky Television launched a weekly film programme called Movietalk, presented by Richard Jobson, former lead singer of The Skids (and now a writer-director in his own right). The format was like that of a chat-show, in which Jobson talked to invited guests – film writers, distributors and at least one well-known name from the movie world. We were sat in a circle and encouraged to lob comments into the fray.

This was the first show in the series, and we were talking about Blockbusters – it had been the summer of Armageddon, Deep Impact, Godzilla and Lost in Space. The guests were Lost in Space director Stephen Hopkins, Daniel Battsek of Buena Vista International (UK) Ltd, Boyd Farrell of Screen International and me – at that time I was film critic of the Sunday Telegraph.

The video is about 24 minutes long. You can find it at the bottom of this page – after my review of the 1998 Godzilla remake, first published in the Sunday Telegraph 19 July 1998: 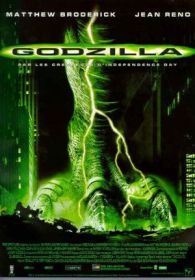 There are two words to describe Godzilla (PG) – big and dumb. It doesn’t matter whether I’m talking about the film or the monster  the film, because they’re interchangeable. But for all its faults – maybe even because of them – it’s still the quintessential blockbuster experience.

The slow build-up – all those teaser trailers throughout the past year – turns out to have been rather more fun than the film itself, just as the ominous rumblings, the mysterious sinking of the Japanese trawler, and the giant footprint are the most exciting bits of the story. But what’s so bad about that? Who decreed that hype couldn’t be an artform?

Godzilla started out as Gojira, played by a man in a rubber monster-suit, who first stomped on a scale model of Tokyo in 1954 in a sort of Kabuki-esque reenactment and exorcism of the nuclear devastation of Japan. For the American market, Hollywood dubbed the Japanese actors (including Kurosawa favourite Takashi Shimura) into English, excised most of the war references, inserted footage of Raymond Burr, and retitled it Godzilla, King of the Monsters. And sure enough, it was a monster smash.

And now the remake, all-American even though, as with most big-budget sci-fi these days, it was directed by a European – Roland Emmerich of Independence Day fame. He and his producer and co-writer, Dean Devlin, have perfected the art of the Event Movie: public awareness plus saturation screening plus tie-in merchandising equals humungous box-office hit. But squeezed out of this equation, alas, is the man in the rubber monster-suit, and with him most of the old monster’s charm. Instead, we’ve got state-of-the-art digital effects and Dolby stereo.

Here’s what passes for a plot: Godzilla is a 200 ft lizard which swims underwater halfway around the world to New York, where it stomps up and down Broadway, wrecking buildings (more out of clumsiness than malice) and laying godzillions of eggs. The eggs hatch into Babyzillas which chase bland eco-biologist Matthew Broderick, TV reporter Maria Pitillo (one of those interchangeable brittle blondes who are all over our screens these days) and cameraman Hank Azaria around Madison Square Gardens. After that, the big lizard chases everyone up and down the streets of Manhattan.

That’s it, except that somewhere along the line, Broderick and co are joined by French secret service agent Jean Reno, who’s supposed to be one of the good guys, though you can’t help wondering where he was when Rainbow Warrior blew up. Now he’s trying to make amends for his government’s nuclear testing in the Pacific, which is the reason why that dinky Komodo Dragon grew to be 200 fit in the first place.

But if that’s so, why doesn’t Godzilla go and knock over the Arc de Triomphe, or disrupt the World Cup celebrations? You know why – and it’s not because he’s a Brazil fan. It’s because American blockbuster audiences haven’t a clue where Paris is, and wouldn’t give two hoots about it if they did. But dismantle that narrative logic, as do Emmerich and Devlin, and your monster is no longer a metaphor for nuclear power, nature biting back, Saddam Hussein or any of those other trusty standbys. Now he’s just a rampaging blob of mutant hype.

Anyway, new-style Godzilla wrecking buildings by accident just isn’t as satisfying as old-style Godzilla stomping cities with a wicked glint in his eye. And the best-known tourist landmarks aren’t destroyed by the monster at all, but by friendly fire from the American military, which blunders around in the monster’s wake, blasting the top off the Chrysler Building and so forth. This might have developed into an amusing subtext, except that the military aren’t depicted as gung-ho trigger-happy lunatics but as reasonable people whose bombs somehow go astray.

But why carp, when the film-makers deliver exactly what they promised: big lizard, buildings demolished, chases, explosions? Basic, very basic. But there is, after all, something of the Godzilla in us all.