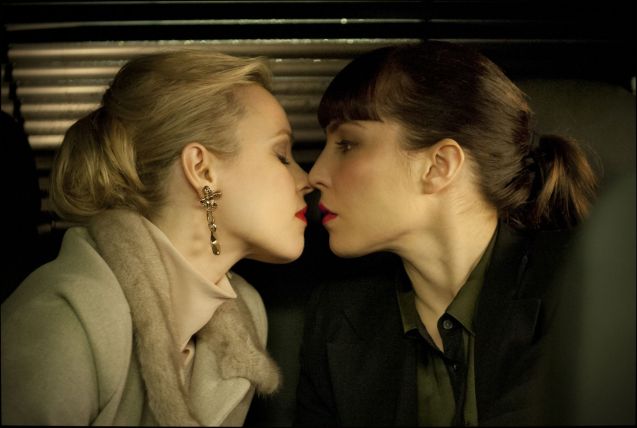 Two and a half years ago, when I saw Alain Corneau’s Crime d’amour, I enjoyed the performances of Kristin Scott-Thomas and Ludivine Sagnier, but remember thinking the directing was flat and that what this sub-Hitchcockian scenario really needed was a flashier, more Expressionist mise en scène to make it pop. Events have now conspired to make me think perhaps there is a God after all, because here comes Passion, an English language remake of Corneau’s psychothriller directed by Mr Flashy Sub-Hitchcock himself – Brian de Palma.

Forget the disappointing Black Dahlia, derailed and diluted by catastrophic casting of just about everyone except Aaron Eckhart, or the Faux Found Footage of Redacted. Passion is a welcome return to the elements of Continental Brian, previously laid out for our delectation in the underrated Femme Fatale. Beautiful women in lingerie? Tick. Preposterous rococo plot which collapses after about, oh, five seconds’ analysis? Tick. Lipstick and nail varnish? Fuck-me (and-break-my-ankle) shoes in scarlet crocodile or emerald suede? Crazy camera angles, baroque lighting effects, bonkers split screen? Dream sequences so indistinguishable from the dreamlike ambience of the film itself that you can’t tell where they stop or start? De Palma pastiching himself pastiching Hitchcock? Tick, tick, tick.

Ladies and gentlemen, in the Blonde Corner we have Rachel McAdams in Mean Girls Regina-to-the-max-mode as Christine, unscrupulous dragon lady boss of a super-slick advertising agency in Berlin. She wears the Big Trousers, literally. Facing off against her in the Brunette corner we have black-suited Noomi Rapace as Isabelle, the talented protégée for whose idea Christine takes credit, leading to an escalating war of boardroom attrition involving shared boyfriends, betrayal, public humiliation and eventually, yup, murder. Also, girl-on-girl kissing, gratuitous black stockings, sexy smoking and great earrings.

But wait, there’s more! Evidently Corneau’s Blonde versus Brunette scenario wasn’t enough for De Palma, for the naughty old poodle has added a Redhead – German actress Karoline Herfurth, who played the Lisbeth Salander-like tyro vampire in the splendid Wir sind die nacht (We Are the Night). She holds her own against the film’s two heavy hitters as Dani, Isabelle’s assistant, who turns the film’s unromantic triangle into an uneven square. It’s only the fourth angle – a shared boyfriend called Dirk – who lets the side down; Paul Anderson was enigmatic and intriguing as Colonel Sebastian Moran in Sherlock Holmes: A Game of Shadows, but he’s miscast here, not to mention sloppily directed, and it’s hard to see what either Christine or Isabelle sees in him. But then, one gets the impression De Palma wasn’t terribly interested in the male characters. It’s the girl stuff that interests him. And why not?

It’s a film of surfaces and reflections, played out against a backdrop of glassy modern architecture and Pino Donaggio’s music, which at times echoes not just his own score for Dressed to Kill but Ennio Morricone’s for The Thing. There is no redeeming moral element, no insight into the human condition, no social comment, no resonance beyond that of a half-remembered dream, no nourishment for the soul. Unless, of course, your soul gets off, as mine does, on quintessentially De Palma-esque games of doubling, on the best accessorised exercise in backstabbing bitchery since Olivier Assayas’s DemonLover, on the best nervous breakdown in a swanky motor since Lana Turner had a hysterical screaming fit at the wheel of her car in The Bad and the Beautiful, on Bette Davis versus Joan Crawford-style melodramatic point-scoring, on the look of things, on camera moves, on film itself.

SOME NOTES ON DJANGO UNCHAINED

SOME NOTES ON CLOUD ATLAS or LO CUT SALAD