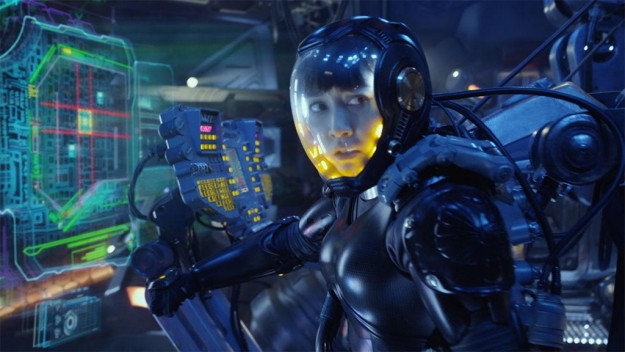 Things fall apart, the centre cannot hold. Big tentpole pics underperforming, box-office down 21.4% from last year, adults deserting cinemas in favour of TV aimed at grown-ups, Steven Spielberg and George Lucas predicting a meltdown: are we heading for the Great Blockbuster Debacle of 2013?

To read on, please click on the pic of Rinko Kikuchi (above) to be whirled by a virtual F5 tornado to the Telegraph website.

Plus! Here is my 1996 review of Twister from the Sunday Telegraph. 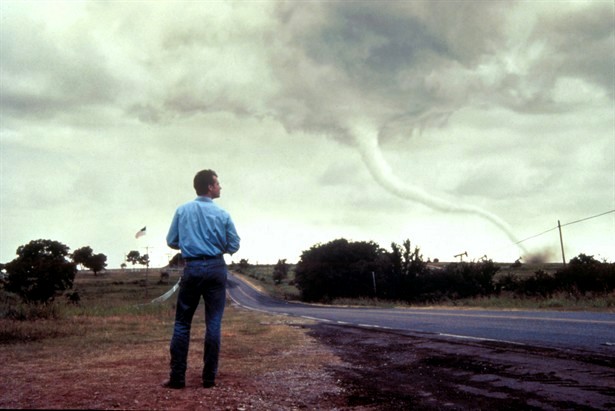 Man has always been wary of magic. In times gone by, he condemned it as the work of the Devil and burned its practitioners at the stake. Nowadays, he merely whinges that it doesn’t have proper characters and a plot.

For Twister is film magic, pure and simple. Georges Méliès, the turn of the century film-maker who kicked off the whole shebang with such fantasies as Le voyage dans la lune, and the man who defined story as a ‘thread intended to link the effects’, would surely have approved.

And the unbelievers are duly baffled, because Twister is indisputably a plot and character-free environment. At best, you might say, it cobbles together the romantic triangle from His Girl Friday, the obsessive pursuit of a mighty force of nature from Jaws and the wacky meteorological conditions from The Wizard of Oz and tries to pass them off as a coherent story. But you know what? It doesn’t matter. We get the picture, and if it feels vaguely like one, or indeed several, we’ve seen so very many times before, it has never looked and sounded quite as extreme as this. Where witches once conjured tempests out of empty air, now director Jan de Bont and the special effects wizards from Industrial Light and Magic have whipped them up from the latest computer technology.

And what tempests they are! Twister is one tornado after another, each bigger than the last – from a measly F1 all the way up to an awesome F5 on the Fujita Scale (I learned about the Fujita Scale from the film, so let no-one say it doesn’t have educational value). Helen Hunt, a popular American TV star who’s perennially underused on the big screen, plays a meteorologist whose overriding ambition is to plant a piece of measuring equipment in the path of one of an unprecedented series of whirlwinds that are steadily brewing in Oklahoma.

Bill Paxton (last seen in Apollo 13) plays the soon-to-be-ex-husband who wants to marry a nice therapist, but whose storm-chasing instincts keep dragging him back into the fray as he tries to get his estranged wife to sign the all-important divorce papers. Racing along for the ride are Jami Gertz as Paxton’s frazzled fiancée, Cary Elwes as a sleek corporate-sponsored rival who’s in it ‘for the money, not for the science’, and a full complement of science geeks who laugh maniacally as they head towards the latest hotspot with their car stereos at full blast.

That’s all you need to know. In fact, that’s probably more than you need to know about a film in which most of the dialogue consists of variations on that old action movie standby, ‘Go go go go go!’, augmented by ‘Oh yes, definitely a sidewinder!’ and (my personal favourite) ‘Debris! We have debris!’ Debris is putting it mildly. Our intrepid tornado trekkers are pelted by everything from giant hailstones to flying cows to plummeting petrol tankers. You or I would wear hard-hats, but these people obviously like to feel the breeze in their hair.

What you see is what you get. There’s no subversive political or ecological subtext here, no literary antecedents, no mythological underpinnings to the fields of corn and jaunty faux-Copland music. The body count is too feeble for it to qualify as a disaster movie – this is PG-rated family fare through and through. You might wish, as I did, that the white-knuckle intensity of  the opening sequence – in which the reasons for Hunt’s obsessive storm-chasing are established – had been maintained throughout the subsequent action, and you might wonder why the film is cluttered with so many annoying science nerds wittering on about the ‘suck zone’ if so few of them are actually going to get sucked into it.

But this is a magic show, and a case of never mind the quality, feel the wind. Now if only the film-makers had taken it a step further into Barnum & Bailey territory and devised a tornado equivalent of the Sensurround gimmick which added ‘real’ tremors to screenings of the 1974 disaster movie Earthquake. Giant fans hidden in the auditorium, perhaps, to ruffle skirts and ruin hair-dos and pelt everyone with popcorn. Think of the squeals.

(This review first published in the Sunday Telegraph, 1996)

2008 addendum: This is one of those blockbusters that has to be seen on a big screen to reap the full experience. It’s on the small screen on your living-room that little things like plot and characters become vitally important, whereas films that give precedence to spectacle tend to fall flat. This might seem insultingly obvious, but I’ve lost count of the times various friends have expressed disappointment in something I’ve seen and recommended to them, only for me to find they’ve been watching it on a tiny computer screen with tinny sound. Duh.

One thought on “THE GREAT BLOCKBUSTER DEBACLE OF 2013”