Looks can be deceiving. The first thing you should know is that Richard Kelly’s third film isn’t really about the box at all. It’s more about what’s inside, which is a big red button. The place is suburban Virginia and the time is 1976, for no reason I can fathom other than this was the heyday of the paranoid conspiracy thriller and Kelly fancied giving us the heebie-jeebies with some truly terrifying 1970s wallpaper.

Cameron Diaz and James Marsden play a married couple with a pubescent son called Walter and what sounded to me like iffy Virginian accents, though I’m no expert. Diaz has a club foot; Marsden’s dream of becoming an astronaut is about to take a knock; their financial situation isn’t dire, but it’s tight. Into their life comes Frank Langella, a smooth gent with half his face missing (what with The Dark Knight and Let the Right One In, this is becoming quite the fashionable CGI effect), to present them with the aforementioned button. If they press it, he tells him, two things will happen. Firstly, they will receive one million dollars. And, secondly, someone they don’t know will die.

This is the high-concept premise of Richard Matheson’s short story Button, Button (not, you will note, Box, Box) first published in Playboy in 1970 (where the sum of money in question was a scant $50,000 – that’s an awful lot of inflation in just six years) and adapted for TV in 1986 as an episode of The Twilight Zone. Not without some soul-searching on the part of Diaz and Marsden, the button is duly pressed, which is where Kelly parts company with his source material. He takes the idea and runs with it – into some very peculiar places.

To elaborate further would be to spoil what pleasures the film affords; suffice to say that some of these places are intriguing, others over-ambitious and yet others extremely silly, but it’s around the mid-point, when the spectator is being repeatedly wrongfooted as one genre slips into another, and thence into another, that the film is at its creepiest and most intriguing. Are we watching a conspiracy thriller, or sci-fi, or a horror movie, or a study of suburbia in the style of David Lynch? Why do people keep getting nosebleeds? Why are walk-on characters behaving like extras from Invasion of the Body Snatchers? Why does the big red button look like the eye of HAL the computer in 2001: A Space Odyssey?

The answers, believe me, are not satisfactory. Just as we begin to twig what’s going on, the plot wriggles out of Kelly’s grip altogether and veers off into the overstretched delirium of all ambitious but immature directors who attempt to sign off with an emotional wallop they haven’t come close to earning, despite the best efforts of the actors. Diaz demonstrates she’s capable of darker roles, while Langella reminds us, once again, that he has one of the most sinister presences in films, abetted by a disfigurement which is all the more alarming for our being fed glimpses rather than hit over the head with its full-on shock-horror, an approach symptomatic of the director’s effective visual restraint in fields other than wallpaper.

Like the box itself, the film’s contents are both more and less than meets the eye. But if the results are less coherent than Kelly’s overpraised debut, Donnie Darko, they at least have a resolve and purpose missing from his much derided second film, Southland Tales, and he shows us once again he’s a dab hand at drumming up a dread-filled apocalyptic vibe. Now, if he’d just stop solving the mysteries of the universe or trying to impress us with references to Arthur C. Clarke and Jean-Paul Sartre (yes, yes, we get it, you’re what passes for an intellectual in Hollywood) we might arrive at a really interesting place. 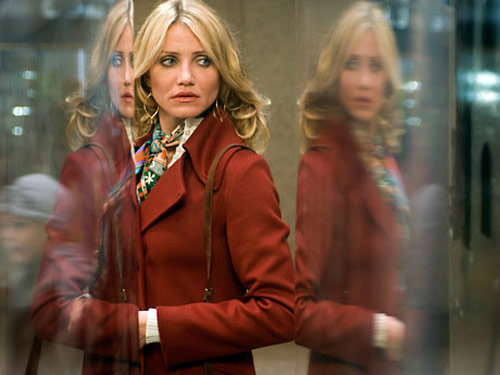 This review was first posted on theartsdesk.com in 2009.

TEN EXAMPLES OF GREAT DRESSING-GOWN ACTING IN THE MOVIES