Jacques Audiard’s follow-up to The Beat That My Heart Skipped is another dip into the criminal underworld, and mostly takes place in a French jail. Nearly every other film or TV series I can think of which is set behind bars (Prison Break,The Shawshank Redemption, Papillon and so on) is concerned with escape. Even the two most celebrated French prison movies, A Man Escaped and Le trou, are about finding a way out. But A Prophet is that rare bird – a prison film in which escape is never an issue. It’s all about the inside.

Tahar Rahim plays an 19-year-old Arab called Malik who is sentenced to six years for an unspecified crime. This is the story of his unsentimental education, how prison transforms him from an illiterate naïf, picked on by everyone, into a powerful and respected crimelord. Prison is the making of him: it becomes his school, his workplace, his playground and, ultimately, his fiefdom.

The induction begins when a Corsican Mafia kingpin (the deceptively avuncular-looking Niels Arestrup) presents him with a choice: murder another inmate, a man who has already made a pass at the newcomer, or die. Ironically, it’s Malik’s designated victim who gives him the most valuable advice he’ll ever hear – learn to read – shortly before his sliced throat is gushing blood.

It’s the world’s messiest killing, but the Corsicans rule the roost, so the deed goes unpunished. There are consequences, nonetheless. After the trauma of the murder, Malik is haunted by his victim’s ghost. To begin with, the apparition is menacing; as the film continues he becomes jocular, even reassuring company, a sort of jailbird Jiminy Cricket whose eventual disappearance turns out to be even more disturbing than his presence, because it signifies a fundamental change in our man’s character. 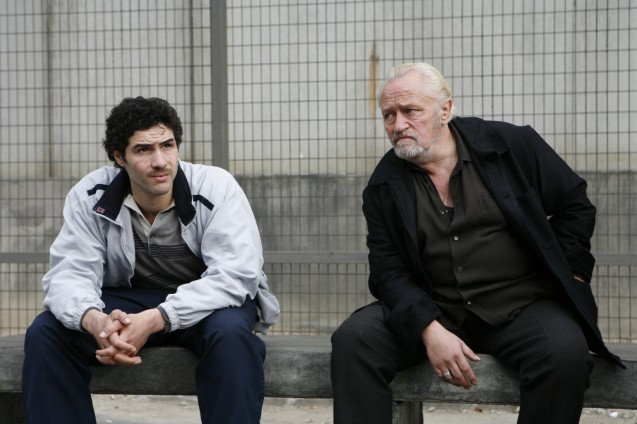 The film rests on the shoulders of Rahim, whose experience has hitherto been limited to a French TV mini-series and, as one of the cops in À l’intérieur, shining a torch around and saying, “Don’t worry, she’s gone,” shortly before nutty Béatrice Dalle slips back into the house and slaughters everyone. It’s a big step from this tiny role in a low-budget horror movie to being in nearly every scene of a Palme d’or nominee which carried off the Grand Jury Prize at Cannes.

His performance is all the more impressive for its being reaction rather than action; he doesn’t so much command the attention as enable us to see this world through his eyes. I hesitate to use the word “avatar” these days, but that’s essentially what he is, and Audiard doesn’t need 3-D to suck you into what is without question a top contender for Most Intense Cinematic Experience of the Year. The director uses gritty in-your-face close-ups to immerse us in the daily routine of prison existence, which, like all minutely observed routines, is utterly compelling.

Life is cold and grey (the lighting is noticeably warmer when Malik is outside the jail) and photographed in what might have been social realist style, had not the director inserted a few touches of dirty surrealism, such as the peculiar pay-off to a tense excursion that earns Malik the nickname that gives the film its title, and which might have been termed magical realism in a more whimsical film.

But there’s nothing whimsical about A Prophet. Criticism of the system is implicit – prison teaches prisoners how to be better criminals – and of course the jail is a microcosm of French society, with its ethnic factions (women figure only tangentially, and then only as either madonnas or whores) but Audiard’s screenplay, co-written with Thomas Bidegain, is neither preachy nor polemical.

Violence is infrequent and pragmatic rather than gratuitous, but also messy and painful. Beyond the murders, the most wince-making moment involves Malik learning how to secrete a razor blade in his mouth. The blade draws blood, repeatedly, but he knows he has no choice in the matter. It’s bleed, or die.

This review was first posted in 2009, on theartsdesk.com.

SOME THOUGHTS ABOUT RUST AND BONE