RAZE
As regular readers of this blog will be aware, I’m a Rachel Nichols fan. So I was excited to see she was in Josh C. Waller’s Women-in-Prison movie. Alas, my excitement was short-lived; no sooner has Rachel been drugged and woken up in an underground bunker, dressed in white vest, black sports bra and sweatpants, then Zoë Bell is beating her to death.

And so you have it. Kidnapped women fight each other to the death with their bare hands, mostly while weeping. Fighting and Crying might have been a better title. Doug Jones and Sherilyn Fenn are the villains who stage this contest for their decadent rich friends by arranging for their goons to menace the women’s loved ones, as leverage. Bell plays abductee-in-chief, Tracie Thoms (one of Bell’s Death Proof co-stars) is another combatant; the other women are pretty much indistinguishable, apart from Rebecca Marshall as the obligatory psycho who gets off on killing. Maybe input from a female writer might have helped inject some life into that mass of anonymous cannon fodder? Just saying. 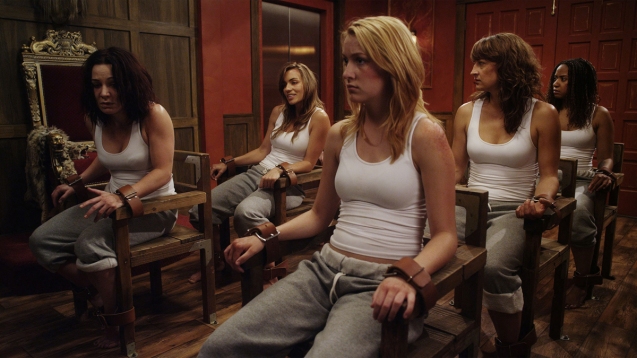 The fighting is repetitive and badly edited, though there’s a certain base appeal in waiting to see when and how Bell will turn the tables on her captors. But it lacks the zest of the best exploitation; given the premise, some tasteless sleaze would surely not have gone amiss. Instead, one has the uneasy feeling the film-makers think they’re appealing to our sisterly instincts. But if you’re going to make a film about 50 women in vests beating each other to death with their bare hands, there’s really not much point in trying to be politically correct about it, is there now. The ending strives to be ironic, but is just mean-spirited.

SAVAGED
In what appears to be a double nod to Abel Ferrara’s 1981 exploitation classic Ms 45 (still a highpoint of the rape-revenge movie) the central character in Savaged is a deaf-mute called Zoe (Amanda Adrienne). While driving through grimy desaturated desert landscape to New Mexico, to move in with her Afro-American boyfriend, she has the misfortune to run into a bunch of local apache-murdering psychos who gang-rape her and leave her for dead. Her ordeal is filmed with discretion, and mercifully not stretched out to I Spit On Your Grave duration, though is still pretty unpleasant. As, of course, it should be.

Amanda Adrienne in the early stages of her decay in Savaged.

But it’s at this point that Michael S. Ojeda’s rape-revenge movie goes a bit bonkers, stops being gruelling and starts being fun. In a development that shows that the film’s title is actually a groan-making pun, a Native American’s well-meaning attempts to revive the mortally wounded young woman result in her corpse being possessed by the spirit of Mangas Coloradas (a real-life Apache chief who in 1862 was betrayed and murdered by the U.S. military), who duly wreaks horrible vengeance on her redneck persecutors, leaving them scalped, eviscerated or shot full of arrows.

It’s hard not to thrill to the spectacle of the racist scumbags meeting well-deserved ends at the hands of Zoe’s walking corpse, which like Griffin Dunne in An American Werewolf in London, is more decayed and maggoty each time you see it. Ojeda (who wrote, directed, shot, edited, sound-edited and did digital effects – bravo!) pulls off the not inconsiderable feat of making you feel for the dead heroine, and knows better than to overstay his welcome. 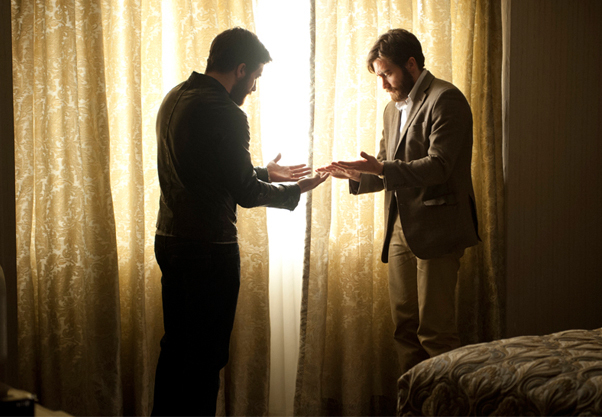 ENEMY
One of two films Canadian director Denis Villeneuve made in 2013 with Jake Gyllenhaal, this is less obviously commercial than preposterous-thriller-pretending-to-be-something-weightier Prisoners, but shares its serious-minded approach to genre material. This one’s an adaptation of a novel by José Saramago. Gyllenhaal plays a mild-mannered history professor who one day stumbles across an actor who appears to be his exact double (in the film’s funniest conceit – and it doesn’t have a lot of them – he’s playing the bit-part of a bellboy in what looks like a frothy farce).

Of all The Parent Trap-style hi-jinx or Dead Ringers identity crises you could get up to or explore with your doppelgänger, the film opts for the least fun one. The two men stalk each other, act sullen and try to seduce each other’s lookalike-ish blonde womenfolk (Mélanie Laurent and Sarah Gadon). With not-so-hilarious consequences.

It’s all quite oblique and lugubrious, seeded with portentous references to a dreamlike club which looks like a cross between the Bada Bing and the Black Lodge, and the ending is a seriously WTF blast of magical realism that seems more designed to provoke discussion than to bring down the curtain. The film’s trump cards are a superbly unsettling soundtrack by Danny Bensi and Saunder Jurriaans, and the haunting portrayal of Toronto as a Kafkaesque labyrinth full of coded exchanges, overlaid by an ominous ochre cast of pollution.

A tableful of nerds gets it on in Zero Charisma.

ZERO CHARISMA
Katie Graham and Andrew Matthews’ directing debut is a low budget character study of the sort of nerd who makes the science geeks of The Big Bang Theory seem well-adjusted and socially adept. Scott (a fearlessly uningratiating performance by Sam Eidson) is obese, almost certainly has bad personal hygiene, and is the sort of saddo who will claim “I wrote The Matrix.” He lives with his grandma – probably the most well-adjusted character in the film.

He’s also Game Master of a Dungeons & Dragons-type board game, ruling his cowed little clique with astonishing pedantry and meanness until, one day, he meets his nemesis in Miles, another boardgame fan who has not only all the right nerdy credentials, but also a girlfriend, a successful website and social savoir-faire. One by one, Scott’s players are enticed away by the newcomer.

It all leads to a showdown of not-so-epic proportions in which everyone shows their true colours. What’s great about the film is that Scott never undergoes a Damascene conversion, but remains obnoxious and unrepentant to the end. It’s all quite funny, cringe-making and sad. It’s easy to scoff at him, but let us not forget – there is something of Scott in us all.

Escape from Tomorrow: not such a thrill ride.

ESCAPE FROM TOMORROW
A man who has just lost his job starts to fall apart. As he and his family tour Disneyland, he starts obsessing, midlife crisis-style, over a couple of flirty French girls. The cool thing about Randy Moore’s black and white debut feature is that it was filmed at Disneyland without permission. The film’s opening stages are funny and scary; the snatched footage of walkways and rides ably convey the sinister side of the theme park experience, where you can’t help suspecting each unnaturally cheerful mask conceals terror and perversion.

Some early minor digital tweaking to give the exhibits a demonic twist is effective. But unfortunately the film falls apart even more spectacularly than its leading character when Moore loses confidence in the simplicity of his central conceit and starts piling on mad doctors, robots and paranoid conspiracies – none of which are convincing, even as hallucination – and throws in an ending that fails to work on any level.

IKARIE XB1
As an introduction to this 1963 Czech science fiction classic, Imagine Film Festival very kindly laid on a Dutch astrophysicist to explain that if the distance between the sun and Earth were the equivalent to the distance from the podium to the projection booth, Alpha Centauri would be an artichoke in Teheran. Or something. Anyhow, it’s a long way away.

It’s to Alpha Centauri that the starship Ikarie XB1 is headed in a quest to find alien life. Jindrich Polák’s fascinating film, adapted from a novel by Stanislaw Lem, now looks like a key influence on later science fiction cinema – you can see elements of 2001: A Space Odyssey, Solaris (another adaptation of a Lem novel), Event Horizon, Sunshine and even Alien in its production design, in the portrayal of a team of cosmonauts going about their everyday business, in the exploration of a creepy abandoned vessel, in the crazed behaviour of a team member threatening the lives of everyone else on board, in the intimations of a superior alien presence calling the shots, and in the name of the spaceship itself – a name one might think is just asking for trouble, given the fate of its original owner.

Quirky and agreeable touches include a comically old-fashioned Robbie-style robot that ends up saving the day (because it’s not part of the compromised main system), Zdenek Liska’s Radiophonic Workshop-style score, a grand piano on which one of the characters picks out an extract from Honegger’s Le roi David (now there’s something you don’t hear everyday) and a splendid “futuristic” dance that looks like rock ‘n’ roll choreographed by androids with arthritis.