From June 1980 to October 1981 I worked as a part-time cashier at Screen on the Hill cinema in Belsize Park, London. It was somewhere between a first-run art house and a repertory cinema: the main programme would be a first-run independent or European film (My Brilliant Career, Raging Bull, Maîtresse), and then at weekends there would be late shows and the occasional all-nighter, consisting of cult favourites (Pink Flamingos, Texas Chain Saw Massacre, Eraserhead) or golden oldies (The Crimson Kimono, Yojimbo, The Legend of Lylah Clare).

Needless to say, I got to see the films, and also took advantage of a sort of unofficial cinema mafia, a reciprocal arrangement by which I could get to see films at other rep cinemas (the Scala, the Electric, the Everyman and so on) for free. So on my days off, when I wasn’t taking photographs or doing the rounds of the art departments, trying to find photographic work, I would go to the cinema.

My job as a cashier consisted of sitting in a little booth and selling tickets, making sure the numbers added up correctly (they always did – I may not be a maths genius, but I’m OK at basic arithmetic, and I’m very conscientious) and answering the phone. As in many cinemas, there was a high turnover of part-time staff, working under a manager. Other employees tore tickets and sold refreshments, and there was also a fancy mirrored bar, which did a roaring trade at evenings and weekends. There was also a projectionist, but he kept himself to himself. 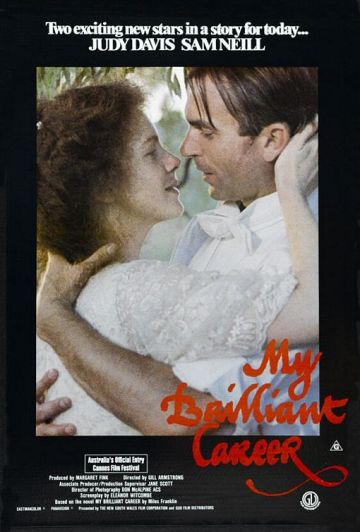 Periods of frantic activity, coinciding with the start of the programme, alternated with periods of nothing much happening, which suited us all just fine. I used this dead time to teach myself how to do the Times cryptic crossword. I also experimented with my new photographic flash (sometimes with horrible results – just look at some of the pictures in the gallery). Other employees, when they weren’t selling coffee or what we used to call “hippy harvest” snacks or taking inventories of chocolate bars, posed for me, or plaited each other’s hair, or read magazines, or ate, or helped me do the crossword. Actually, I’m not really sure what they did. Everybody smoked, all the time, though the auditorium itself was a no smoking zone, which at the time was unusual for a London cinema.

It might not seem it from these photos, but we were all quite efficient at our jobs – except for the time the on-duty staff somehow all ended up inside the auditorium, all at the same time, watching a late-night screening of Fellini’s Casanova, allowing an opportunistic thief to make off with the box-office takings. I was present that night, but I don’t think I was on duty. I hope not, anyway.

I was part of a core group of staff members who – and I’m not proud of this – used to gang up against some of the weaker-minded employees. However, I’m not sure our victims ever actually realised they were being bullied, since our tactics consisted of things like getting the projectionist to play Joan Fan Club by Skafish repeatedly on the audio system between screenings. Sample lyric: “You’re so fat, Fat fat fat fat, You’re grotesque, That’s why we make fun of you.”

When I first started working at the Screen, the film showing there was Gillian Armstrong’s My Brilliant Career. There are two things I remember about this: 1) This was the first time someone told me I looked like Judy Davis. I don’t see it, myself, but she’s fabulous so I’m not complaining. And there must be something in it since an American theatre impresario once came up to me in a London restaurant and said he’d just been watching me in a film with Clint Eastwood. 2) On the poster, it looks as though Judy Davis is eating Sam Neill’s bogey.

In 1980, the BBFC refused to grant a certificate for the uncut version of Barbet Schroeder’s Maîtresse, obliging the Screen on the Hill to temporarily become a cinema club in order to screen it under club conditions. Customers routinely asked for tickets to see Mattress or Matrix. Ralph Richardson came to see it, his motorcycle helmet tucked under his arm, and paid for his ticket by cheque. One of my co-workers (she’s not in these pictures, and I can’t remember her name) stole the cheque, for the autograph, and replaced it with her own cash. I have a feeling this might have been illegal, but my numbers still added up, so I didn’t remonstrate.

All photographs were taken by me, Anne Billson, or Tom Dawson. I scanned black and white negatives and colour transparencies with an Ion Film2 SD Pro scanner, with mixed results. If anyone knows of a better (preferably affordable) gizmo for digitalising negatives and slides, please let me know.

If you once worked at the Screen on the Hill, feature in one or more of these pictures and would prefer that it’s not made public, please don’t hesitate to contact me (either by leaving a message here, or on Facebook or Twitter), and I’ll remove it ASAP.

Me at the Screen on the Hill Christmas party. 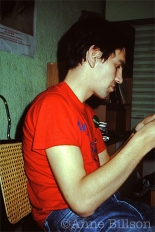 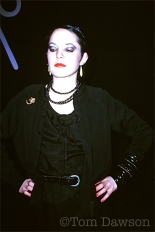 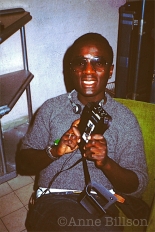 Jo, with the Sony Walkman I had just brought back from Japan.

Alan with his eyes closed. 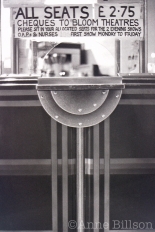 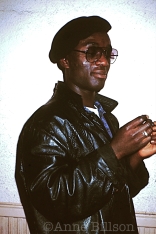 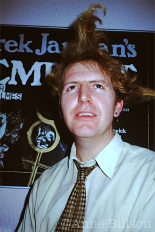 Tom behind the bar. 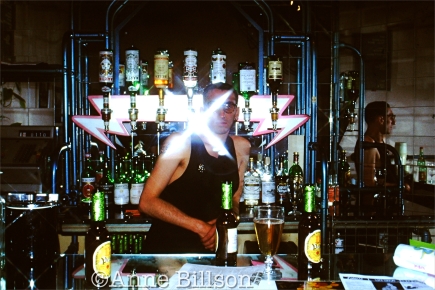 Tom behind the bar.

Me, showing my underarm hair.

Head Over Heels aka Chilly Scenes of Winter. I love John Heard.. 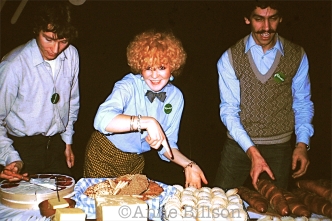 Adrian, Stephanie and Graham at the Screen on the Hill Christmas party. 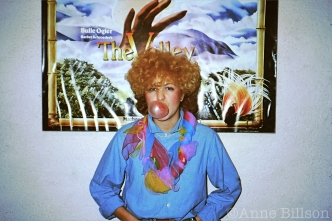 Me, styled by Tom Dawson. 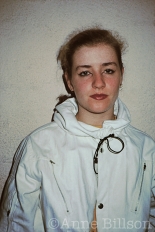 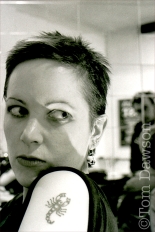 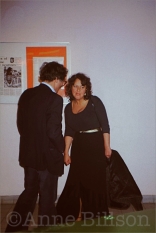 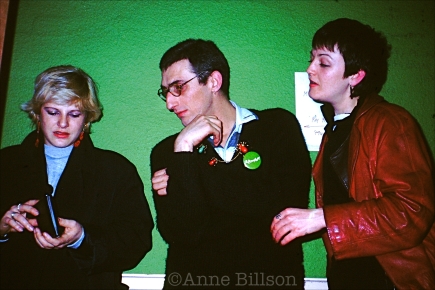 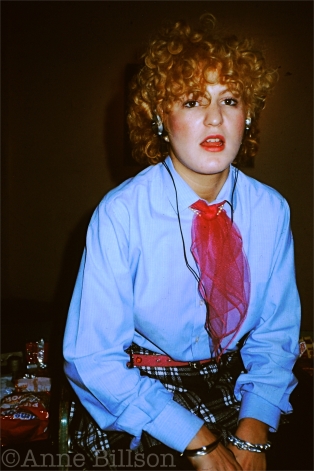 Me, styled by Tom Dawson.

Screen on the Green. 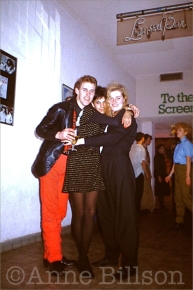 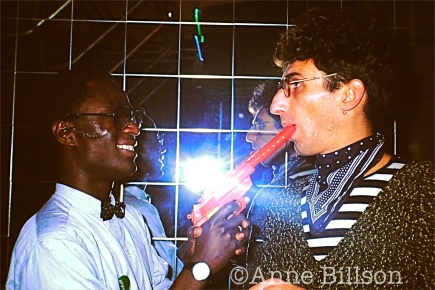 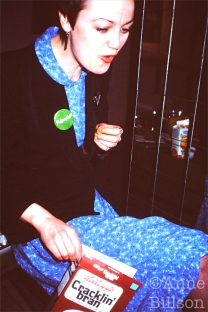 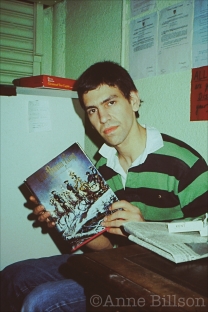 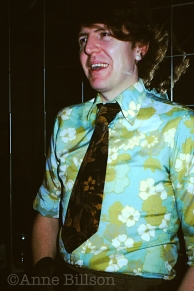 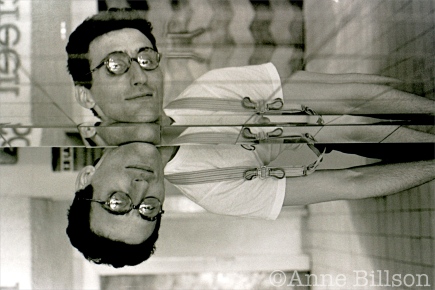 Tom on the bar. 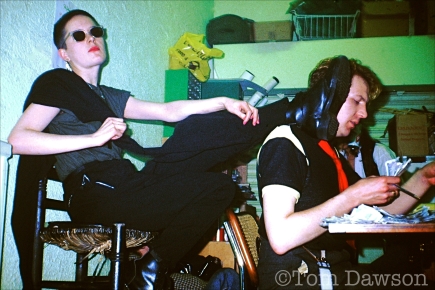 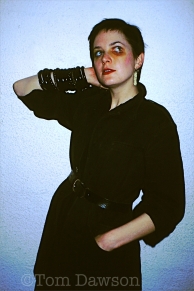 A stranger punched me in the face, leaving me with a black eye. I made up the other eye to complement it.

REP TALES (AND OTHER CINEMA MEMORIES)