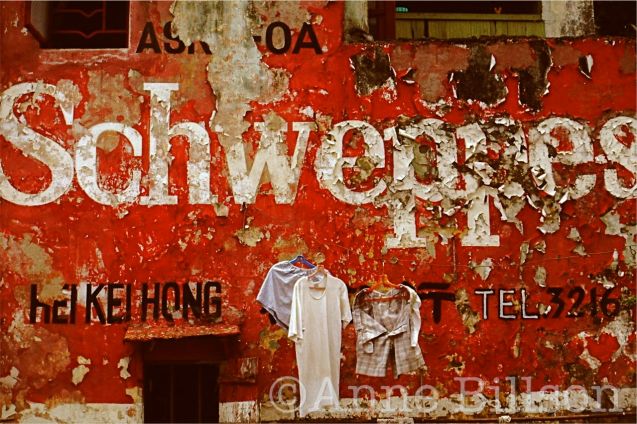 In 1979, while I was based in Tokyo, I spent a week in Hong Kong, which at the time was still under British administration. And while I was in Hong Kong, I made a day trip to Macao, which at the time was still under Portuguese administration. I wanted to visit Macao chiefly because I was smitten with the 1952 RKO film noir of the same name, starring Robert Mitchum and Jane Russell, and directed by Josef von Sternberg (who was fired by executive producer Howard Hughes about a third of the way through filming and replaced with Nicholas Ray).

Of course, I wasn’t expecting the real Macao to be anything like the moody black and white movie, which was mostly filmed on a Hollywood sound-stage, with only stock footage shot on location in Macao and Hong Kong. And so it proved. But the journey there, by hovercraft, was exciting, because we threaded our way past lots of islands that looked exactly like the islands in King Hu’s fabulous arty martial arts costume drama The Valiant Ones (1975), so I felt as though I was going on an adventure, all the same.

Macao was mostly famous for gambling, but since I didn’t have much money, and didn’t know how to gamble (probably just as well, given a subsequent brief but very intense flirtation with slot machines in Las Vegas) I just spent the day walking around. It was a small island, so it took only a few hours to walk all the way around it. Despite the place’s reputation as a gambler’s paradise, it seemed a lot less prosperous than Hong Kong and Kowloon, and the built-up areas were thronged by beggars.

Everywhere I looked, there were signs and posters for soft drinks, so I started taking photographs of them. By the time I caught the hovercraft back to Hong Kong, I’d filled a roll of Fuji RD. The transparencies have been sitting around in boxes ever since; this is probably the first time I’ve shown most of these photographs to anyone. I’ve also included a couple of pictures of cigarette advertising, and one of what looks like a poster for doughnuts. But the recurring motif is that of soft drinks. 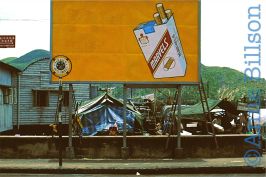 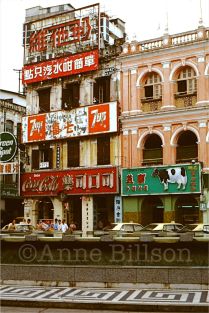 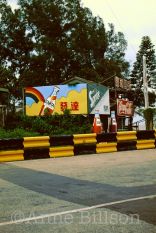 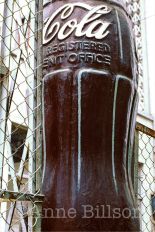