This review of City of Angels and other new film releases was first published in the Sunday Telegraph on 21 June 1998, during the early stages of the World Cup, which was held that year in France. 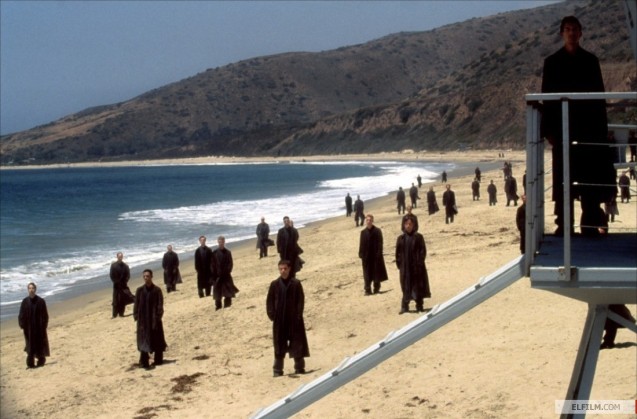 Do films stand a chance against the World Cup?  Judging by the week’s new releases, absolument non. Whoever thought that City of Angels would fill that all important gap in women’s lives thought wrong. Just because we girls may be partial to a dollop of romance now and again doesn’t mean we’ll settle for any old mush, and this Americanisation of Wim Wenders’ Wings of Desire settles for the soft option every time.

We are not alone. Angels walk among us like invisible referees, wearing black, eavesdropping on our thoughts and, when our time is up, gently ushering us off the field of play. And every evening they assemble on the beach to stare at the sunset like fascist zombies. If only they were sinister or evil, then the film might have had some point, but instead their modus operandi is to loiter like bland U.N. observers.

Imagine. Even when you’re in the bath, Nicolas Cage is hovering lugubriously at your shoulder, gazing at you with those intense spaniel eyes like a bad case of care in the community. Creepy, isn’t it? And yet it’s supposed to be romantic when he becomes so obsessed with heart surgeon Meg Ryan that he starts to stalk her. I’ll run that by you again. Meg Ryan, the original tête à claques girl, plays a heart surgeon. She’s upset because she just lost one of her patients, presumably because he had another attack as soon as he realised who was going to operate on him.

Cage becomes so enamoured that he shows himself to her and even starts debating whether to sacrifice his immortal status. Suddenly he wants to smell the sweet air of Los Angeles (and boy, is he in for a shock there), stroke Meg’s hair, run the length of the pitch and bang one into the net, that sort of thing.

This is Brad Silberling’s second film and like Casper, his first, it suffers from a surfeit of New Age whimsy, eager to reassure us that we’re being watched over by benevolent beings, and that we can all count on the prospect of a cosy afterlife. But if you don’t buy into the premise, forget it. At least Wings of Desire had moments of visual poetry, whereas City of Angels is all shampoo gloss and so many swooping aerial shots that you start wishing the helicopter carrying the camera would crash, preferably on the two leading characters.

It’s a story that throws up more questions than it answers; you can tell that screenwriter Dana Stevens hasn’t bothered to establish any ground-rules. If you’re going to pretend that mythological creatures are real, with real feelings, then you can’t get away with presenting them like airy-fairy metaphors that don’t requite any further explanation – you’ve got to address the meat-and-potatoes stuff. What happens, for example, if an angel feels like cutting a dash in red or blue, instead of black? How do they appear and disappear? Are there angels everywhere, or do you only get them in places like Los Angeles, which have a higher-than-average credulity rate?

The film’s most heartening features are supporting performances from a couple of stalwart TV cops – Homicide‘s Andre Braugher as one of Cage’s fellow angels and NYPD Blue‘s Dennis Franz as one of Ryan’s patients. These two, between them, manage to insert some classy passing shots into what is essentially one long goalless yawn between Saudi Arabia and South Korea. 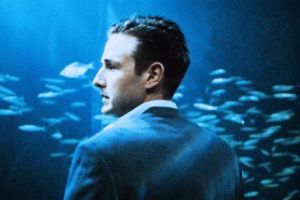 In Dream with the Fishes, David Arquette plays a timid voyeur whose attempt to commit suicide by jumping into San Francisco Bay is foiled  by terminally ill Brad Hunt. The sick man promises to kill Arquette in return for help in acting out his wackiest fantasies during his final weeks. These turn out to be pretty juvenile escapades, from nude tenpin bowling to nude bank robbery, but somewhere along the line there are attempted reconciliations with family members and other unfinished emotional business.

Screenwriter Finn Taylor’s directing debut is a surprisingly upbeat, witty variation on the mismatched buddy movie, and manages to avoid mawkishness until right at the end, when, due to the nature of the story, a certain amount of Hollywood hug becomes inevitable. Up until then, the film and its characters have a pleasingly freewheeling quality reminiscent of the more innovative days of 1970s Hollywood, making it the cinematic equivalent of an entertaining 1-1 draw between Croatia and Nigeria.

The Last Time I Committed Suicide is the semi-biographical account of Neal Cassady – role-model for the Beat Generation and original of Jack Kerouac’s Dean Moriarty – and why he failed to realise his dream of living happily ever after behind a white picket fence with his manic-depressive girlfriend.

The obvious reason for this failure is that it’s a pathetically unrealistic dream to begin with, but writer-director Stephen Kay blames it on the distractions posed by billiard-bar buddy Keanu Reeves, Gretchen Mol as a schoolgirl with whom Neal has been fooling around, the unsporting reaction of her mother and so on.

Lack of willpower might have been another deciding factor, since Cassady’s abiding characteristic appears to have been an inability to persist in anything other than irresponsible adolescent behaviour. Kay dutifully piles on the essential components of the Beat lifestyle – black coffee, jazz, cigarettes, dangerous driving and talking bollocks – but though Thomas Jane is passably cute in the leading role, his predilection for Catholic schoolgirls and total lack of curiosity as to why his girlfriend slashed her wrists at the start of the film come across as creepily self-indulgent. 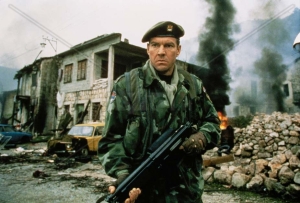 In Savior, Nastassja Kinski gets blown up by a Muslim bomb, after which Dennis Quaid, who plays her husband, exacts revenge by storming into a mosque and gunning down worshippers before running away to join the Foreign Legion. And that’s even before the opening credits have spelt out the dread words “Oliver Stone”.

Stone, it turns out, is one of the producers – the director is Predrag Antonijevic, making his American debut – but I spent the rest of the film reeling from this pre-credits overload, the sort of psychological motivation that might have been more dramatically effective had it been served up in smaller doses, via dialogue or flashback.

It’s a shame, because this is a more hard-headed account of the mess in the Balkans than Welcome to Sarajevo, with which it shares the central kiddy-in-peril storyline. Quaid seems recently to have lost his way in Hollywood, though demonstrates some sturdy acting here as a battle-hardened mercenary whose humanity is gradually reawakened by the plight of a young Serbian lass and her new-born baby.

Not the least of the film’s uncompromising points is the way her family rejects her when she fails to commit suicide after being raped by Muslims. Conversely, a potentially horrific scene in which bus passengers are arbitrarily clubbed to death suffers from literal overkill, with the chief assailant selecting bigger and bigger sledgehammers like a real-life Wile E. Coyote, while a doomed traveller breaks out into a poignant keening lullaby.

Fret not, because last but not least we have a rerelease of John Boorman’s brilliant Point Blank, first released in 1967, in which Lee Marvin comes storming out of Alcatraz in search of the guys who set him up, shot him and stole his wife.

Or does he? Could it all be the fantasy of a dying man? Either way, it’s one of the most stylish and haunting revenge thrillers ever made.