It’s not so long ago that fantasy films were nothing but Harry Potter and Percy Jackson and Aragorn and Eragon and Dave, all of them Chosen Ones, questing in the footsteps of Luke Skywalker, while girls were relegated to helpmates, trophies and also-rans.

Then along came Twilight, and everything changed. Girls were suddenly bankable, sort of. They’re still a minority, but compared to the barren noughties, there is now almost a profusion of young female protagonists in live-action fairytales or adaptations of Young Adult bestsellers such as The Hunger Games. And the heroine du jour, whose journeys are often darker and more Jungishly suggestive than those of her young male counterparts, is the Girl Goth. 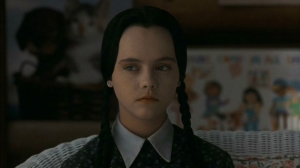 The Girl Goth Heroine has her forebears: Lydia Deetz (“I myself am strange and unusual”) in Beetlejuice, Wednesday (“I’m not perky”) from The Addams Family, and Stokely “Stokes” Mitchell (“I don’t have any friends, and I like it that way”) in The Faculty. But they were part of ensemble casts; you can count on the fingers of one hand films like The Craft, in which the witchy chicks take centre stage.

But witchy chicks are all the rage now, so here are a few pointers to help you identify the Goth Girl Heroine.

Usually with fountain pen and unfeasibly elegant handwriting. “My story can never be told,” says Byzantium‘s Eleanor, who then proceeds to tell it in enormous great detail. See also The Moth Diaries and the TV show The Vampire Diaries, both adapted from cult YA novels. With all the scribbling these girls have to do, it’s a wonder they find time for any Goth Heroine shenanigans.

Her classmates are scared of her – often with good reason. Lena Duchanne in Beautiful Creatures shatters her classroom windows in an access of Carrie-like angst; Byzantium‘s Eleanor alarms her English teacher with her confessional approach to essay-writing; Stoker‘s India stabs a school bully – and that’s just for starters.

Byzantium‘s Saoirse Ronan, Stoker‘s Mia Wasikowska and Beautiful Creatures‘ Alice Englert all have the sort of face that’s bewitching precisely because you can’t tell if it’s pretty or plain. Goth Girl has quirky yet charming dress sense (at least one virginal white frock or nightdress is mandatory), long straight hair, and a flawless complexion. Do adolescents not get acne any more?

Twilight‘s Bella Swan is still fixated on Wuthering Heights, but Lena in Beautiful Creatures is into Charles Bukowski, for heaven’s sake, while Becca in The Moth Diaries approaches Sheridan LeFanu’s Carmilla, her class set-book, as though it were a self-help manual.

5) She has parent issues.

India Stoker’s dad is “burned to a crisp” in a mysterious car accident. In The Moth Diaries, Becca’s father is a famous poet (extra points for that!) who kills himself (and even more points for that!). As for Eleanor’s father in Byzantium – your guess is as good as hers, though I’d put my money on that sadistic syphilitic roué played by Jonny Lee Miller.

6) She tinkles the ivories!

The high point of Stoker is India’s orgasmic Philip Glass duet with her Uncle Charlie. Enigmatic Ernessa in The Moth Diaries plays a Chopin Nocturne, while Saoirse Ronan, annoyingly, mastered a Beethoven Sonata from scratch in just 12 weeks for her role as Eleanor in Byzantium.

7) Her birthday is special.

Not for our Goth Girl Heroine a mere cake with candles. No, India Stoker’s father dies on her 18th birthday, while Lena Duchanne approaches her 16th with trepidation, since it’s then she must undergo The Claiming, a sort of metaphorical sorting-hat for Good or Evil.

Paranormal powers, pyromaniac tendencies, mental illness, a thirst for blood… there’s invariably more to our girl than meets the eye. Unless, of course, she’s Twilight‘s Bella Swan, whose sole talent seems to be gazing adoringly at her vampire boyfriend. 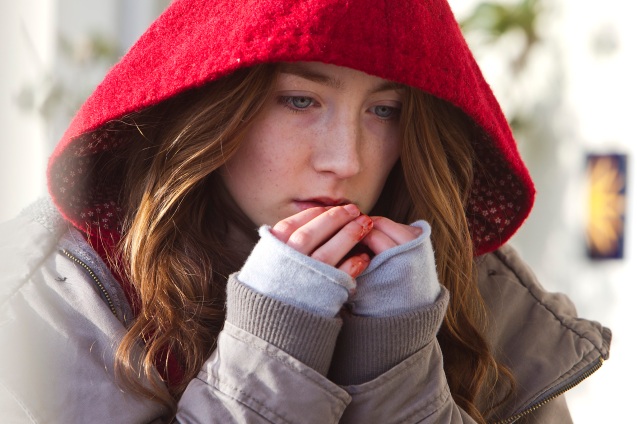 9) She gets a recurring red motif.

Whether it’s Red Riding Hood‘s signature garment, or Becca’s BFF spilling scarlet nail lacquer, or India swapping her plimsolls for red stilettos, there’s always a touch of symbolic red around the Goth Girl Heroine. Red not only symbolises blood – it often is blood, not to mention sex and death and womanhood. Also, it looks good on screen.

Some form of sylvan jaunt is an obligatory staging post of the Goth Girl rite of passage. The heroines of Red Riding Hood, Snow White and the Huntsman, Twilight, Stoker, The Moth Diaries and, yes, The Woods all plunge into murky forests, there to get up to all manner of uncanny hanky panky which will enable them to emerge as women.

Of the films mentioned on this page, only Byzantium is forest-free, though it does have its own idiosyncratic equivalent, involving a rowing-boat, an island, and bats. Lots of bats. 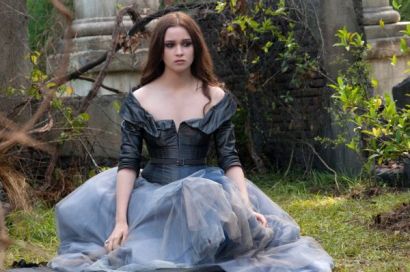 This article was first posted on the Telegraph website in May 2013.

5 thoughts on “GOTH GIRL HEROINES AND HOW TO SPOT THEM”