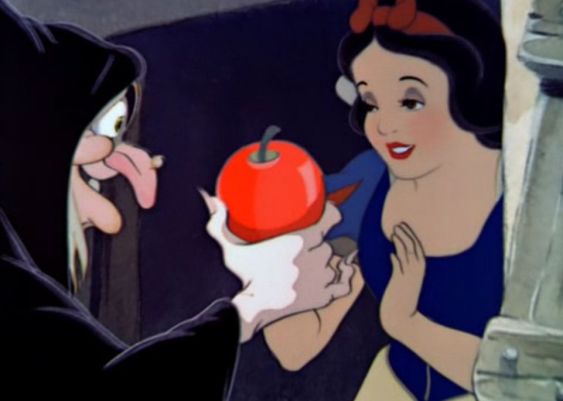 Everything’s coming up Snow White. Last week I saw my third film version of the fairytale in one year. Blancanieves, an exquisite black & white silent movie from Spanish director Pablo Berger, follows Tarsem Singh’s Mirror, Mirror (showcasing the final work of the late Eiko Ishioka, costume designer extraordinaire) and Snow White and the Huntsman, now probably best known for the offscreen shenanigans between its director and leading lady, Kristen Stewart. And two new books containing versions of the story have been published – Poison by Sarah Pinborough, and Twisted Fairy Tales by Maura McHugh.

They’re a long way from being the first reimaginings. Disney’s animated film remains the most famous version, but even that was a family-friendly version of the original Grimm’s tale, in which the Huntsman is ordered to deliver not Snow White’s heart but liver and lungs to the Wicked Queen. (He presents her with boar’s innards instead, and lucky for him there’s no CSI: Enchanted Forest on the case to uncover the deception.) In the Grimm, the Queen makes several attempts to kill Snow White, and is eventually punished by being forced to wear shoes of red-hot iron.

Anne Sexton, in her poem Snow White and the Seven Dwarfs, describes the results quite graphically:

First your toes will smoke
and then your heels will turn black
and you will fry upward like a frog,
she was told.
And so she danced until she was dead

But there have also been more lighthearted variations, such as Howard Hawks’ delightful Ball of Fire, in which the Snow White character is transformed into sassy chanteuse Sugarpuss O’Shea (Barbara Stanwyck), who seeks refuge from her gangster boyfriend in a household of unworldly etymologists (Gary Cooper among them) whom she flummoxes with her showgirl slang. And Donald Barthelme wrote a satirical literary reworking set in modern New York, where the fateful apple is replaced by a poisoned Gibson (the same cocktail Cary Grant orders on the train in North by Northwest).

Snow White isn’t the only fairy-tale to have recently been turned into a live action movie, but the story seems to have gripped the modern imagination more than, say, Jack the Giant Slayer or Red Riding Hood. Just what is it about this particular yarn that makes it so ripe for revision?

“Snow White contains many of the archetypal elements of a fairy tale,” says McHugh, creator of graphic novel heroines Roisin Dubh and Jennifer Wilde, “Cruelty to an innocent, loss of home or status, the discovery of allies, trial of courage and the final triumph over wickedness.”

It also has “jealousy, wealth, passion, attempted murder and power games,” says Pinborough, whose Poison puts a surprising (and sexy) new spin on the story. In other words, it’s a fairy-tale that ticks all the boxes.

Neil Gaiman, whose short story Snow, Glass, Apples draws an unexpected if logical conclusion from the way Snow White returns from the dead, finds “Disney’s Snow White gave it charm and meant that it was absorbed into childhood… Snow White went global in a way that other fairy tales didn’t. Which means that it’s become one of those tales that are easy to retell and mess around with: we’re familiar with Snow White and her story, so we can look at it through a number of different prisms and see what it shows us.” 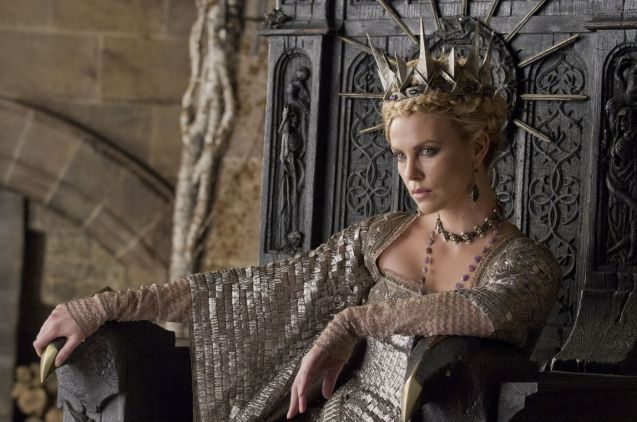 Charlize Theron in Snow White and the Huntsman (2012)

What it has been showing us recently is that the Evil Queen rules. The central motif of Snow White is, according to Bruno Bettelheim, “the pubertal girl’s surpassing in every way the evil stepmother who, out of jealousy, denies her an independent existence.”

Traditionally, then, it’s Snow White’s story, but writers and film-makers are now finding the villain just as interesting. What’s her story? Why is she so cruel, so insecure about her appearance, so determined to annihilate her younger rival? Or has she been misrepresented all along?

In their stories, Gaiman, McHugh and Pinborough each present the Queen’s point of view as much as, if not more than, Snow White’s. As for the films, the Queen is always more memorable, better dressed and a lot more fun than her vapid stepdaughter. Who now remembers anyone other than Sigourney Weaver from 1997’s Snow White: A Tale of Terror, or Julia Roberts camping it up in Mirror, Mirror, or Charlize Theron, who with her milk baths and strap-on evil fingernails dominates Snow White and the Huntsman?   And while Macaraena García is touching as Blancanieves, it’s Maribel Verdú as her wicked stepmother who romps away with the show. 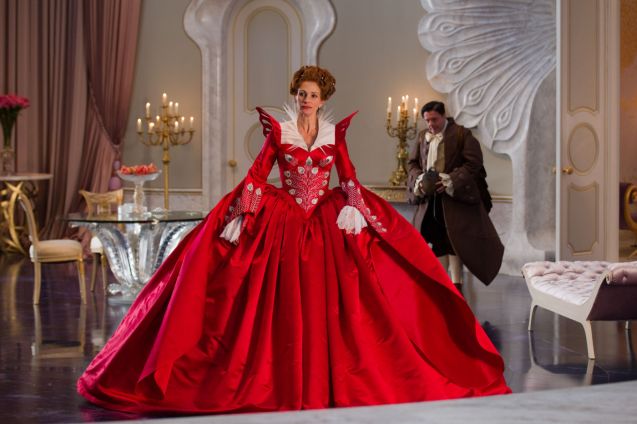 Sigourney Weaver in Snow White: A Tale of Terror (1997)

While in some cases too much information can rob villains of their power to terrify (Gregory Maguire’s Wicked, a Broadway musical, and Oz the Great and Powerful have between them probably done for The Wicked Witch of the West) there seems to be an insatiable appetite for bad guy back story, as evinced by recent TV series Hannibal and Bates Motel, and as promised by next year’s Maleficent, with Angelina Jolie presenting the case for the Wicked Fairy from The Sleeping Beauty.

Being evil is no longer enough – we want to know why they’re evil, and the Wicked Queen’s obsessions, in particular, chime with our own. As Pinborough points out, “Everything in it is relevant to today’s society – especially the focus on ageing beauty versus youth.”   And so the Wicked Stepmother gets her revenge at last.

Snow White might have started out as a coming-of-age fable, but it’s no longer about her – she’s ended up a supporting character in her own story. These days it’s all about the Evil Queen.

This piece was first posted on the Telegraph website in May 2013. It has been lightly edited.

2 thoughts on “EVERYTHING’S COMING UP SNOW WHITE: OUR FAVOURITE FAIRYTALE?”