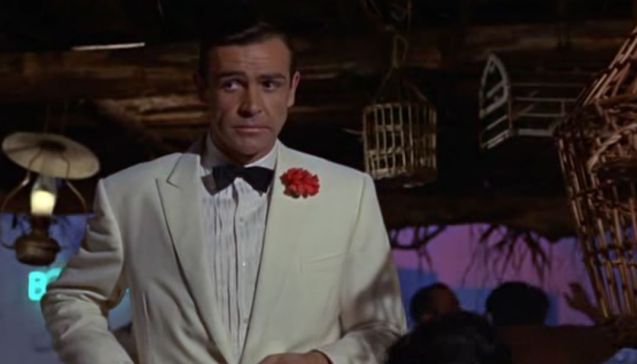 The first time I laid eyes on James Bond, he was emerging from the ocean with a fake seagull on his head. After which he blew up a drug lord’s laboratory, peeled off his wetsuit to reveal an immaculate white DJ, snogged an exotic dancer, clocked the reflection in her eyeballs of a bad guy sneaking up behind them, tipped said bad guy into the bathtub, threw an electric heater in after him, and quipped: “Shocking, positively shocking!” All this, and the credits hadn’t even started. The 12-year-old me thought I’d died and gone to heaven.

Many years later, Goldfinger remains not just my favourite Bond movie, but the standard by which all other Bond movies must be judged. It has Sean Connery, of course, and the best theme song, incorporating Shirley Bassey giving it maximum welly, backed up by lashings of John Barry brass.

And it has the best villain; Auric Goldfinger (Gert Fröbe) is a petty-minded plutocrat who cheats at cards and golf, and has the best ever evil dialogue. His masterplan is to profit from the economic chaos that will ensue after he has detonated an atomic bomb in Fort Knox, making America’s gold reserves radioactive for 58 years. “He’s quite mad, you know,” Bond says to Pussy Galore, just in case any of us might have thought this was a viable get-rich-quick scheme.

Best villain: Auric Goldfinger. He cheats at cards and golf. 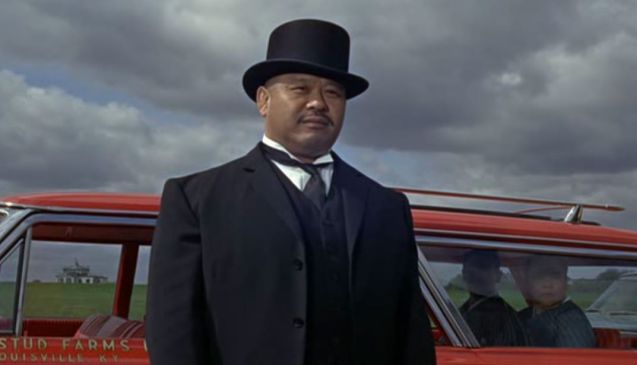 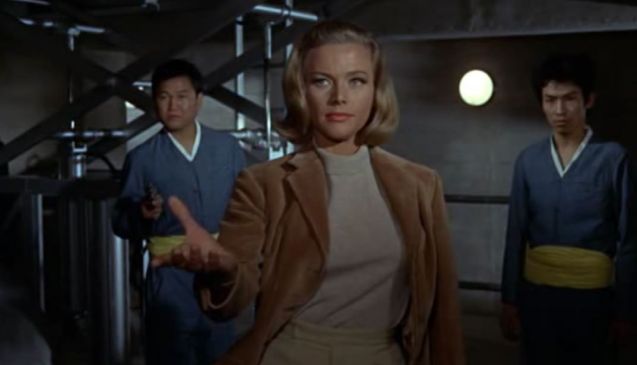 Ah yes, “Poosy”, as Connery calls her – the implicitly (explicitly in Ian Fleming’s novel) lesbian pilot with the ultimate absurd Bondgirl name. And yet Honor Blackman, who plays her, never looks less than Totally in Control, even when required for plot purposes to yield to Bond’s rufty-tufty manliness. Mindful of Blackman’s ass-kicking role as Cathy Gale in TV’s The Avengers, the film-makers allow her to fell Bond with a judo-throw, but that’s as far as they go with this feminist nonsense. Bond promptly upends her in the hay, and overcomes that implicit lesbianism with just one kiss. Yes, it’s the old all-they-need-is-a-good-shag-from-a-Real-Bloke ploy.

Goldfinger has the best henchman – Harold Sakata as Oddjob, the thickset Korean with the deadly steel-rimmed bowler. And the best car – the Aston Martin DB5 with “revolving number plates, naturally”, making it valid for Britain, France and Switzerland. It’s also equipped with smokescreen, oil slick, front-wing machine guns and passenger ejector seat, all of which Bond employs against carfuls of pursuing henchmen… to no avail, because he ends up totalling it – confused by his own reflection in a mirror, for heaven’s sake – and gets captured anyway.

And yet the film never looks anything other than fabulous – Ted Moore’s cinematography has a large-scale epic quality, and the action gallivants from Florida to Stoke Poges to the Swiss Alps to Kentucky in grand style, with some studio stop-offs in between.

Best car: the Aston Martin DB5, “with some modifications”.

Which brings me to what I like most about Goldfinger: it makes me laugh. I never tire of the cunning back projection used to make it look as if Connery is in Miami, as opposed to Pinewood, the disposable comedy gangsters to whom the villain outlines his evil scheme, the montage of troops pretending to be gassed and collapsing ineptly, or of Pussy Galore’s crack team of girly stunt pilots (“Pussy Galore to Champagne Leader!”) who scamper across the tarmac to their planes like schoolgirls who are bad at games.

But best of all is Bond’s uselessness. He somehow manages to get both Masterton sisters killed (one of them covered in gold paint, Best Ever Bondgirl Death) and spends most of the film tippling – Dom Perignon, a “rather disappointing brandy”, Martini or Mint Julep, you name it. He gets strapped to a table with a new-fangled laser beam pointed at his private parts – “Choose your next witticism carefully, Mr Bond, it may be your last” –  in the funniest and most memorable Bond-in-peril scene, and one that, pace Austin Powers, is not so easily escapable. Our man’s family jewels remain intact only thanks to Goldfinger’s typically Bondvillain reluctance to deliver the coup de graçe.

For the last hour of the film, Bond is Goldfinger’s prisoner while the action occurs elsewhere, and it’s Poosy who saves the day offscreen (though of course 007’s natural-born studliness might have had something to do with changing her mind). Has there ever been a more passive hero? Even at the climax, he’s reduced to bashing cackhandedly at the atomic bomb casing with a gold brick, trying in vain to stop the countdown – only for a CIA man to step in at the very last minute and calmly flick the “off” switch.

Despite its hero’s ineptitude, Goldfinger is full of quintessential Bond moments, all of which have since been recycled or spoofed so many times you forget this is where so many of them began – Bond tricking his jailer into opening the cell door, a minor bad guy’s car reduced to a scrunched-up cube in a scrapyard compactor, the villain shooting his own henchmen to prove how villainous he is… And Goldfinger’s ultimate fate is memorably absurd and horrible.

“Do you expect me to talk?”

I rest my case.

This piece was first posted on the Guardian website in December 2011. It has since been edited.

3 thoughts on “MY FAVOURITE BOND MOVIE”