The Hobbit: The Desolation of Smaug.

Hurrah for Smaug. The Hobbit: The Desolation of Smaug, second part of Peter Jackson’s epic-length adaptation of J.R.R. Tolkien’s The Hobbit, mercifully turns its back on the recent tendency to depict dragons as winsome bundles of fun, a couple of steps up from a kitten. Instead, it restores a modicum of evil pride to a once deadly and awe-inspiring species by giving us a “most specially greedy, strong and wicked worm”, a vicious predator who has amassed such a huge stash of gold and jewels, some of which have embedded themselves in his flesh as he slept on them, that in 2012 he topped the Forbes List of 15 Richest Fictional Characters, ahead of Bruce Wayne, C. Montgomery Burns and Charles Foster Kane. Smaug: the very model of a modern fire-breathing plutocrat.

This is how movie dragons ought to be – greedy and mean. So how did it all go so horribly pear-shaped for them? I blame Disney. And Feminism. And children, who have a tiresome habit of embracing terrifying creatures and making them cuddlesome – just look at what they did to Dracula, who ended up on Sesame Street. You would never have caught Siegfried snuggling up to Fafner in Fritz Lang’s Die Nibelungen: Siegfried; he does what heroes are supposed to do – slays the slavering beast and bathes in its magical blood.

The dragons of myths and legends were never cute. Beowulf slays Grendel and his mother, but the dragon is a monster too far, and the hero perishes with it. A lot of movie monsters are surely dragons in disguise; the blood of the creature in Alien eats through metal, like the blood of Beowulf’s dragon, and Godzilla breathes radioactive fire in a very dragonlike way, though of course he can’t fly, unlike his recurrent arch-enemy, the three-headed dragon King Ghidorah. Nor was Ray Harryhausen’s dragon in The Seventh Voyage of Sinbad (1958) one of the good guys, even though he does Sinbad a favour by defeating a Cyclops.

But the rot had already set in by 1941, when Walt Disney Productions brought out a glorified studio showreel called The Reluctant Dragon, in which the centrepiece was a cartoon adaptation of Kenneth Grahame’s 1898 story about an almost certainly homosexual dragon who would rather compose sonnets than scourge and devour. Maleficent momentarily restored the balance of nature by changing herself into an unequivocally evil dragon in The Sleeping Beauty, only for that transformation to be spoofed in The Sword in the Stone, where Mad Madame Mim breaks the rules of her duel against Merlin by changing into a purple dragon. The final straw was the live-action Pete’s Dragon, in which the animated title character adds goofy backing sound effects to a song called Boo Bop Bopbop Bop (I Love You, Too).

The Seventh Voyage of Sinbad.

The floodgates were open. For every Vermithrax in Dragonslayer (“It is evil, pure and simple”) there was a Neverending Story, featuring the Labrador Retriever-like Falkor the Flying Luck Dragon (not to be said too quickly), or crusty yet loveable Sean Connery providing the voice of Draco in Dragonheart. For every Reign of Fire or D-War, there was Mushu the dragon sidekick in Mulan, or Norbert the Norwegian Ridgeback in Harry Potter and the Sorceror’s Stone, or Dragon in the Shrek films, who totally lowers the tone by having cross-species sex with Donkey and giving birth to “Dronkey” hybrids.

Dragons stopped being something you had to kill, or even a metaphor for an obstacle you had to overcome, and, in tune with the touchy-feely times, became an endangered species that needed to be conserved. Eustace Scrubb’s transformation into a dragon in The Chronicles of Narnia: The Voyage of the Dawn Treader, was even presented as a character-building experience.

As if behaving like loveable pooches weren’t enough, they started acting like surrogate ponies too – letting humans ride them in Eragon (Rachel Weisz providing the voice of Saphira the Dragon), How to Train Your Dragon (the Stealth Bomber-like Night Fury), and Harry Potter again, not just battling against a Hungarian Horntail in Goblet of Fire, but escaping from Gringotts, the wizarding bank, on the back of a Ukrainian Ironbelly in Deathly Hallows.

So we owe Smaug a debt of gratitude. Smaug is no pony, to be patted and tamed and ridden. Smaug EATS ponies. Six of them in one night. And with any luck, he’ll be flame-roasting some dwarves and hobbits for dessert. I’m hoping Daenerys Targaryen’s dragons will seal the deal by chargrilling Westeros in the next series of Game of Thrones. No more dragon detente. The era of appeasement is over. 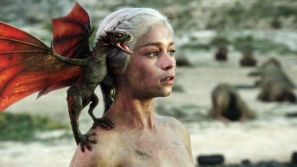 The Chronicles of Narnia: The Voyage of the Dawn Treader.

How to Train Your Dragon.

Harry Potter and the Goblet of Fire.

The Sword in the Stone.

The Chronicles of Narnia: The Voyage of the Dawn Treader. 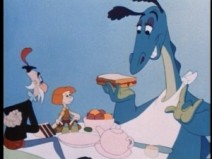 The Hobbit: The Desolation of Smaug.

How to Train Your Dragon. 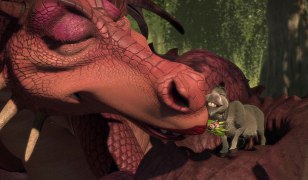 5 thoughts on “DRAGONS: THE GOOD, THE BAD AND THE PONY-EATING”