Like everyone else, I watched last year’s teaser trailer for Mad Max: Fury Road with a mixture of eagerness and trepidation. Eagerness, because hot damn, it looked thrilling. Trepidation, because 1) Mad Max 2 ended with 20 minutes of multi-vehicle mayhem that has yet to be topped. How could the new film possibly live up to that? [ETA: having now seen the new film, I’m pleased to report that it does, pretty much, live up to it. So I’m adding 2) Mad Max: Fury Road to this list.]

The good news is that Fury Road is directed by the same man, George Miller, who once said, “In myth, the chase is an essential part of the heroic development.” The problem is that CGI takes a lot of the fun out today’s car chases, though it seems a bit churlish to complain when this means fewer injuries to stuntmen – the vehicular set-pieces in Mad Max 2 were insanely dangerous, and several went horribly wrong. Happily, although Miller makes use of CGI in Fury Road, presumably for some of the more life-threatening mayhem, he still favours practical effects and real stuntwork for the bulk of the action. This is real stuff, some non-virtual version of what is up on screen was actually happening in front of the camera – and you can tell.

The big, complicated chases in, for example, Bad Boys II, The Matrix: Reloaded or the Fast & Furious franchise are invariably slick, spectacular and not unenjoyable, but they’re more like triumphs of weightless special effects and incontinent editing than classic displays of down and dirty driving.

For the finest examples of those, we have to go back in time. For reasons of practicality and to avoid excessive length here, I’m ruling out comedies (everything from the Keystone Cops to It’s a Mad Mad Mad Mad World to The Italian Job to What’s Up Doc? to Smokey and the Bandit to The Blues Brothers to The Cannonball Run) since the comedy car chase deserves a whole article to itself. Nor have I included films like Grand Prix or Two-Lane Blacktop, which are more race than chase.

The modern car chase began with 3) Bullitt (1968), in which the nearly 11 minute pursuit was not filmed by the second unit, as was then traditional, but by the director himself, Peter Yates. He’s not afraid of downtime; there’s a slow, deliberate build-up that makes the action, when it comes, all the more exciting.

Notable too that Lalo Schifrin’s cool score fades out, to be replaced by little more than the sounds of screeching tyres and gunning engines as Steve McQueen’s Mustang bounces over those San Francisco humps, first pursued by, and then pursuing, two killers in a Dodge Charger.

McQueen did some but not all of his driving; his chief stand-in was Bud Ekins, who had also performed McQueen’s motorcycle jump over the barbed wire in The Great Escape. During the Bullitt chase, Ekins also plays a motorcyclist who gets knocked off his bike; McQueen’s character stops chasing just long enough to make sure he’s OK – a nice character touch to remind us he’s one of the good guys.

The killer behind the wheel of the Dodge Charger was Bill Hickman, stunt coordinator and driver in two other classic movie car chases. First, William Friedkin’s 4) The French Connection (1971) in which Gene Hackman commandeers a Pontiac LeMans to chase a hi-jacked elevated train. And then, 5) The Seven-Ups (1973), directed by Philip D’Antoni (who had produced both Bullitt and The French Connection), which ends with NYPD cop Roy Scheider’s Pontiac Ventura Sprint Coupe getting its roof sheared clean off.

For The French Connection, Friedkin goaded Hickman into driving at 90 mph for 26 Brooklyn blocks without stopping, with director and camera in the backseat. “I would never do anything like that again,” Friedkin told George Pelecanos at an AFI talk. “It’s a good scene, but I was foolish.” 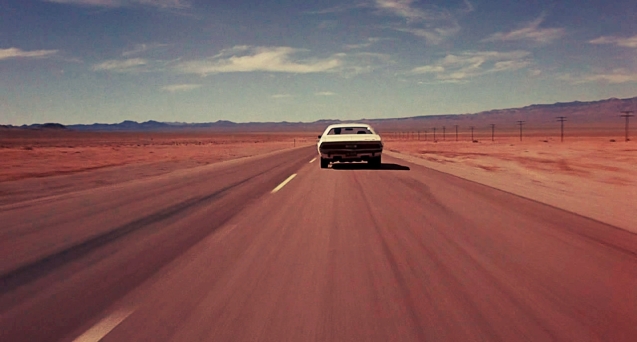 Hickman also worked, uncredited, on what was perhaps the greatest pure chase movie of the era: Richard C. Sarafian’s 6) Vanishing Point (1971), with a screenplay by the Cuban novelist G. Cabrera Infante. Barry Newman plays Kowalski, an ex-cop and Vietnam veteran who accepts a bet to drive a white Dodge Challenger (a car now so iconic that Quentin Tarantino explicitly referenced it in Death Proof) from Denver to San Francisco in 15 hours, a feat impossible without the help of more than one type of speed.

With the “Blue Meanies” (ie cops) on his tail, the film turns into one long chase punctuated by flashbacks, encounters of the post-Woodstock kind and mounting media interest. Sing ho for the open desert road and the typically 1970s nihilistic ending, echoed three years later as Peter Fonda and Susan George outrun Illinois police cars in 7) Dirty Mary, Crazy Larry – but they can’t dodge fate!

Perhaps the longest uninterrupted, if not the most stylish, car chase is the 40 minute wreckapalooza in 8) Gone in 60 Seconds (1974) written, directed, produced and starring H.B. Halicki alongside a yellow Fastback Mustang called “Eleanor”. Ninety-three cars are wrecked, not all the onlookers are extras, and not all the accidents are staged – filming had to stop while the director recovered from crashing into a telegraph pole.

Tragically, Halicki died in 1989 when another telegraph pole fell on him during preparations for Gone in 60 Seconds 2. His widow executive-produced the duff 2000 Nicolas Cage quasi-remake.

Walter Hill stripped the car chase movie down to its essential components in 9) The Driver (1978) in which Ryan O’Neal’s cool behind the wheel leaves Ryan Gosling in Nicolas Winding Refn’s Drive eating dust. 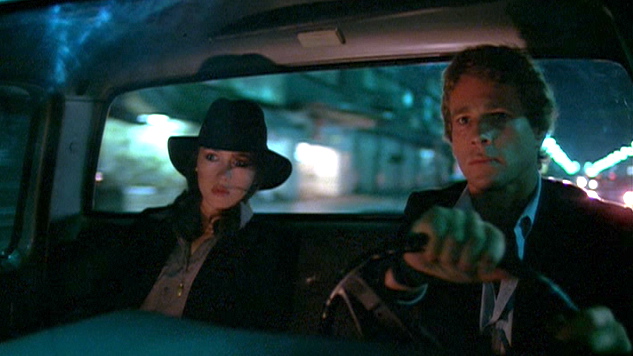 Some of the best mid-1970s car chases, meanwhile, were being staged in Italy, for ultra-violent “poliziotteschi” crime thrillers, many of them starring Maurizio Merli and his unflappable moustache. Movies like 10) Violent Rome (1975) are stuffed with political incorrectness, ultra-cool music – and some of the most thrilling car chases ever filmed, often shot without police permits on the streets of Rome or Naples. Umberto Lenzi claimed at a recent screening of his Rome Armed to the Teeth (1976) that some of the sirens that can be heard during a breakneck ambulance chase are real cops giving chase.

Friedkin tried to top his own French Connection car chase in his 1985 cop thriller in 11) To Live and Die in L.A. – and pretty much succeeded, as gonzo secret service agent William Petersen evades gunmen by driving the wrong way down a freeway (the panicked reactions of his less gung-ho partner, played by John Pankow,were real). Friedkin famously reversed the traffic flow to get the desired effect. But another of the director’s  attempts to breathe life into the convention – in the erotic thriller Jade (1996), in which the pursuit slows almost to a standstill in a Chinese New Year parade – was less successful.

By the 1990s, there were few action thrillers that didn’t have a car chase – and even fewer chases that were actually memorable. John Frankenheimer, who had directed Grand Prix back in 1966, had a late hit with the old-school chase-thriller 12) Ronin (1998) which featured a nice line in French pedestrians leaping out of the way of speeding vehicles (usually shouting a French oath as they did so), and added a topical frisson by having Robert De Niro’s Peugeot 406 pursue Natascha McElhone’s  BMW at breakneck speed through the sort of Paris underpasses where Princess Diana’s car had crashed only one year earlier.

But Hollywood directors seem to be losing the knack of directing such chases, piling on random sound and fury to mind-numbing effect. The pursuits in Quantum of Solace and The Dark Knight, to name just two examples, are a confusing mess. The fad for ultra-quick cutting doesn’t help, though Paul Greengrass, one of the few directors who knows how to use the technique coherently, pulled off a nice chase through Moscow in 13) The Bourne Supremacy. 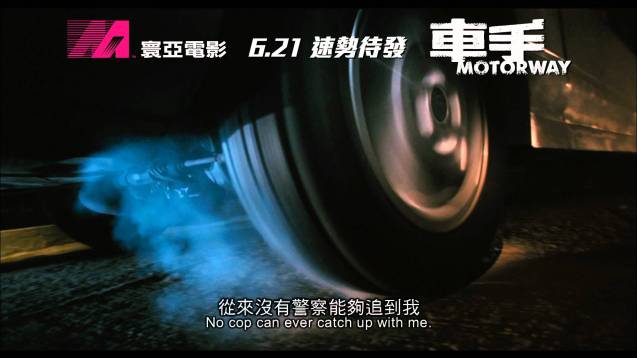 Perhaps we have to look east for the most exciting examples. Cheang Pou-soi’s 14) Motorway (produced by Johnnie To, one of the godfathers of the Hong Kong action movie, and co-starring the always wonderful Antony Wong) revisits the back-to-basics world of Walter Hill’s The Driver (and rather more successfully than Nicolas Winding Refn) and features some terrific stunt driving in a story about two cops taking on a getaway driver.

Or perhaps the answer is to pep up the pursuit by adding another element. In 15) The Raid 2: Berandal, Gareth Evans doesn’t just give us an expertly choreographed multi-vehicle chase – he also gives us simultaneous Silat (an Indonesian martial art) in one of the cars. Howzat!

This piece was first posted on the Telegraph website in August, 2014. It has since been edited and updated.

I found the Internet Movie Cars Database an invaluable tool, as will you if you ever want to identify a certain marque you might have seen in a movie. The thoroughness is impressive; even cars glimpsed fleetingly in the background are identified.

One thought on “PEDAL TO THE METAL: 15 OF THE BEST MOVIE CAR CHASES”