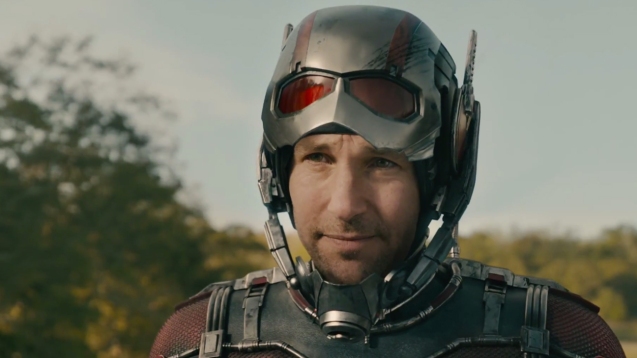 For years, Paul Rudd fans, of which I am one, always used to ask the same question. Why wasn’t he a bigger star? The man is funny, handsome, versatile and smart. He has long been part of Judd Apatow’s unofficial repertory company, had a recurring role as Phoebe’s love interest on Friends, and was a co-creator and writer for the TV show Party Down, which in 2009 won the AFI TV Program of the Year award. And he’s great company on chatshows – just ask Helen Mirren.

Now it looks as though Ant-Man will finally boost him into the A-list ranking; he’s warm and funny and self-deprecating – just the ticket to give an effects-ridden Marvel superhero movie a relatable human presence. But do we really want Rudd to be a bigger star? His speciality has hitherto been more in scene-stealing supporting roles, nutty cameos or oddball indie films, as opposed to big-budget rom-coms and bromances that strive to tame the Rudd, flatten him out into a good-looking but bland leading man.

But maybe you’re not familiar with Rudd’s screen history? Here he is in ten films.

Does he have a portrait in the attic, or what? Now in his mid-40s, Rudd barely looks older than he did in his breakthrough role as Alicia Silverstone’s stepbrother in Amy Heckerling’s delightful update of Jane Austen’s Emma. As the film’s Mr Knightley, Rudd is the foil to Silverstone’s match-making heroine, but beautifully sells the character’s switch from supercilious to smitten, in the process setting an entire generation of teenage hearts aflutter.

After playing Jennifer Aniston’s gay roommate in The Object of My Affection, and mangling the French language to adorable effect in The Château, Rudd went lowbrow for David Wain’s pastiche of summer camp movies, cast (and deliberately so) with actors a decade too old for their characters. The film flopped, but is now a beloved cult item, thanks especially to Rudd as irresponsible camp counsellor Andy, who throws a Kevin the Teenager-style strop in the canteen.

Paul Rudd in The Shape of Things.

Neil LaBute brings his own stage-play to the screen in this breath-takingly cynical dissection of human nature, an early demonstration that Rudd could do straight dramatic as easily as comic or romantic. He plays a nerdy part-time museum guard who falls under the spell of Rachel Weisz, with interestingly nasty results and a vicious pay-off.

ANCHORMAN: THE LEGEND OF ROB BURGUNDY (2004)

Paul Rudd as Brian Fantana in Anchorman: The Legend of Ron Burgundy.

Up against major-league funnymen Will Ferrell and Steve Carell, Rudd holds his own as deluded TV reporter Brian Fantana in one of those comedies that mightn’t seem so hilarious the first time you see it, though by the third time around, and especially after several beers, it has you rolling on the floor, clutching your aching ribs. His would-be macho man can also be seen photographing cats in Anchorman 2: The Legend Continues. “Time to musk up.” 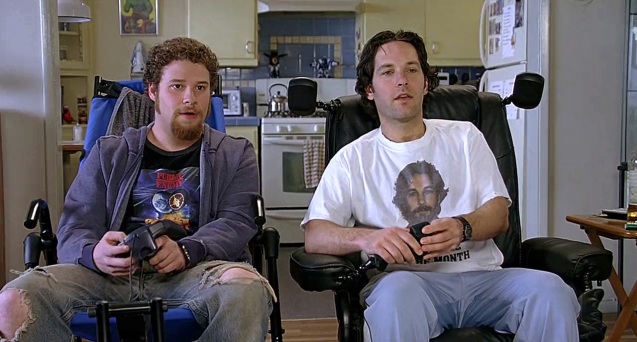 Seth Rogen and Paul Rudd in The 40 Year Old Virgin.

Rudd plays one of Steve Carell’s buddies in Apatow’s surprisingly sweet comedy; his and Seth Rogen’s stupid but oddly inoffensive “You know how I know you’re gay” improvisation is one of the film’s many highlights.

Rudd has only an uncredited cameo in this underrated but smashing spoof of musical biopics starring the peerless John C. Reilly. But that uncredited cameo is as John Lennon. All four actors playing the Beatles are heinously miscast, and the Liverpudlian accents are atrocious – but that just makes it all the funnier.

Leslie Mann and Paul Rudd in Knocked Up.

The scenes with Leslie Mann (Apatow’s real-life wife) and Rudd playing Katherine Heigl’s sister and brother-in-law are the highlights of Apatow’s bloated rom-com, which like most of the producer-writer-director’s films is really a bromance. Apatow liked this relationship so much he revisited it in the even more bloated and self-indulgent This is 40, thus demonstrating that Less is More. Or would be, if Apatow even knew what “less” meant. I can’t think of a single film he has directed that wouldn’t have been improved by having at least half an hour knocked off it. 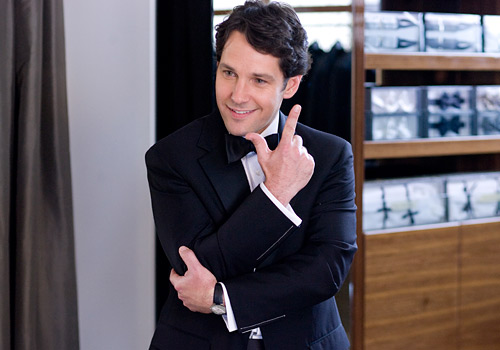 Paul Rudd in I Love You, Man.

Rudd graduated to leading man in the unexpectedly entertaining Role Models (2008) and this bromance, as a bridegroom-to-be who goes on “man-dates” to find a Best Man. Will slobby Jason Segel be the answer? It’s not as funny as it ought to be, but Rudd has a couple of priceless moments that sum up his approach, which is to aim for a trendy or macho pose and get it hilariously wrong. Like this inept James Bond impression.

Rudd and Aniston reunite to play penniless Manhattan yuppies who end up in a commune in an Apatow-produced comedy that could almost be the lighthearted flipside to the more sinister Martha Marcy May Marlene. As a portrait of the breakdown of a marriage, it’s often too raw to be funny, but Rudd shines in a couple of scenes, rehearsing his would-be swinger’s speech in front of the mirror, or being comprehensively outgunned in the guitar stakes by the commune leader (Justin Theroux).

At first sight, David Gordon Green’s low-budget remake of a 2011 Icelandic film appears to be yet another comic bromance along the lines of Green’s own Pineapple Express. Rudd (looking uncannily like a Super Mario Brother) and Emile Hirsch (looking uncannily like Jack Black) play workmates whose job is to paint yellow lines on a remote highway in a part of Texas ravaged by wildfire. But it turns into something altogether more interesting and non-formulaic. No belly laughs here, but a credible, touching portrait of two flawed individuals – and some of the best work Rudd has ever done.

This piece was first posted on the Telegraph website in October 2013. It has been extensively edited.

ETA: for some reason I left out the likeable rom-com I Could Never Be Your Woman, in which he impresses Michelle Pfeiffer with his dancing.

No appreciation of Rudd would be complete without mentioning his serial appearances on Conan O’Brien’s chatshow, in a recurring gag that has gone from being not very funny to tiresome to funny to hilarious.

And we mustn’t forget Celery Man. Now Tayne, I could get into.

Have I left out your favourite Paul Rudd performance? Please feel free to provide suggestions and links in the comments.