The Young and Prodigious T.S. Spivet

In Jean-Piere Jeunet’s The Young and Prodigious T.S. Spivet, the 10 year-old boy inventor embarks on an epic solo journey from Montana to Washington DC, to collect an award for his invention of a perpetual motion machine. On the way there, he rides trains and hitches lifts from truck-drivers and meets eccentrics.

But strangely enough, nothing horrible, or even slightly interesting, ever happens to him on the road. One thing follows another. It’s like Huckleberry Finn without any of the excitement or mythological underpinning. And even though it’s supposed to be taking place in the present, it’s bathed in that warm Jeunet glow that locates it not in the past, nor even in anything remotely resembling life as we know it, but in the land of whimsy. It’s not a film – it’s a FILMSY.

My Shorter Oxford defines whimsical as “characterised by deviation from the ordinary as if determined by mere caprice.” I think of it as a flight of fancy ungrounded in any sort of emotional, psychological, geographical or anthropological realism. I am all for fantasy, by the way, and am not an advocate of unadulterated realism, though it too has its place in the cinema. But the best fantasy is an integral part of the storytelling, and has ties to reality – albeit often in deep cover, buried beneath metaphor. Whimsy, on the other hand, is tetherless. It aspires to be surrealism or magical realism, but it’s really just pulling arbitrary rabbits out of a hat, trying to impress us with its off-the-wall kookiness.

This is subjective, of course. One person’s vomit-inducing filmsy is another’s life-enhancing work of art. I have already squabbled with a colleague who insists Michel Gondry’s Mood Indigo is whimsy of the most pernicious kind. As a fan of the novel on which it was based (Boris Vian’s Froth on the Daydream, I refuse to consign it to the whimsy basket (it’s too satirical and dark and upsetting) but I see his point, for it does feature flying cars, barking shoes and Audrey Tautou.

So how can you tell if a movie will turn out to be a fantastical cinematic experience, or just a load of old filmsy? Keep your eyes peeled for these pointers. 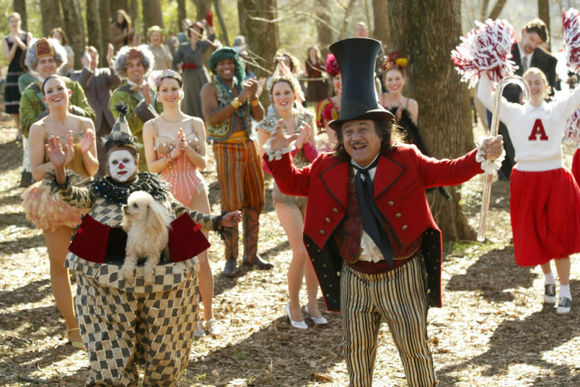 The Director. Some film-makers should automatically come with a Filmsy Warning. Tim Burton (Big Fish), Wim Wenders (The Million Dollar Hotel) and Rian Johnson (The Brothers Bloom) flirt with whimsy. Jeunet, Gondry, Wes Anderson, Miranda July and the Polish brothers kiss it full on the lips.

Titles. Whimsical titles usually mean whimsical films. For some reason, pianos keep cropping up, as in The PianoTuner of EarthQuakes and The Legend of the Pianist on the Ocean. And the word “hotel” should be approached with caution. The Million Dollar Hotel, co-written by Bono, is peopled by crazy lowlifes such as Milla Jovovich as a fey streetwalker who thinks she’s a fictional character (I’ve got news for you, sweetheart) and Mel Gibson as an FBI agent with an arm growing out of his back.

On the other hand, Wes Anderson’s The Grand Budapest Hotel transcends whimsy, since the hotel is not just a metaphor full of kooky people, but actually provides a solid framework for the film’s characters and themes.

Wacky names. In Faraway, So Close! Willem Dafoe plays a character called Emit Flesti, to which I say Reggub ffo. See also Benjamin Button, Darkly Noon, Flower Hercules (played by Daryl Hannah, wearing a ruff, in Northfork), Tecumseh Sparrow Spivet. I realise many of these names were dreamt up by novelists rather than film-makers, but that’s no excuse.

Bricolage. Normally I would applaud any film that favours DIY-style practical effects over digital ones. But there comes a point where Jack Black and Mos Def cobbling together homemade versions of blockbuster movies (Be Kind Rewind) out of empty Squeezy bottles and corrugated cardboard, or small people running around amid giant furniture (Eternal Sunshine of the Spotless Mind) or a kapok horse with a mane made of string (The Science of Sleep) cease to be inventive and amusing, and start to become tiresome. Please be advised there are parts in all of these films that I like – but there are limits.

Folksy wisdom. Otherwise known as banal homilies masquerading as deep-dish philosophy, often drawn from the works of John Irving. “My momma always said life was like a box of chocolates” (Forrest Gump)  “When it comes to the end, you have to let go” (The Curious Case of Benjamin Button). “Keep passing the open windows” (The Hotel New Hampshire). “If we all went around doing what we wanted all the time, there would be chaos” (Simon Birch). “Men see things in a box, and women see them in a round room” (REALLY? Elizabethtown). Big Fish is pretty much a film ENTIRELY CONSTRUCTED out of this sort of naff maxim: “Sometimes, the only way to catch an uncatchable woman is to offer her a wedding ring.” Oh, for pity’s sake.

Quirky characters. The aforementioned folksy wisdom is usually spouted by Holy Fools – characters with learning difficulties, or sick people not long for this world. They solve people’s earthly problems, utter words of folksy wisdom (see above) and then die. Not soon enough, in most cases.

Female characters, meanwhile, tend to be variations on the Manic Pixie Dreamgirl (a term first coined by Nathan Rabin) typically played by Audrey Tautou. (See Amelie, Mood Indigo. In Tautou’s defence, the only films of hers that ever get distributed in anglophone territories seem to be ones in which she is at her most toe-curlingly gamine.) She’s ethereal! She has peculiar hobbies! She wears droopy cardigans! See also: Forrest Gump, The Million Dollar Hotel, Phenomenon, Michael, Simon Birch, Big Fish, Elizabethtown, Garden State.

Amelie and the garden gnome.

Cute digressions. Jeunet is the big offender here, always going off at a tangent to show us someone’s likes and dislikes, or the irrelevant back stories of minor characters or garden gnomes, often accompanied by faux-scientific facts and diagrams. The first few dozen times, it’s adorable.

Chapter Headings. Otherwise known as Subtitle Envy, and a sure sign of directors who want to be taken seriously as auteurs, if not authors. Wes Anderson seems almost pathologically incapable of making a film without putting a lot of writing up on screen. See also: The Brothers Bloom.

Angels. To paraphrase that line often misattributed to Hermann Göring, whenever I hear the word “angel” I reach for my revolver – unless it’s one of those When Good Angels Go Bad movies, like Prophecy or Legion, in which they beat each other up and burst into flames.

But Michael, Northfork, What Dreams May Come are sheer filmsy. I blame Wings of Desire, which in itself is not entirely awful, but this is more than one can say about its egregious sequel, Faraway, So Close!, or the Hollywood remake, City of Angels, in which heart surgeon Meg Ryan is stalked by a lugubrious celestial being played by Nicolas Cage.

It also encouraged a generation of pop stars to prance about in angel wings in their videos, trying to look beatific. Ho, rof s’nevaeh ekas.

This article was first posted on the Telegraph website in June 2014. It has since been revised.

6 thoughts on “FILMSY: WHEN WHIMSY RUNS RIOT IN THE CINEMA”