The ladies’ cloakrooms at Hell Multiplex. (Actually a still from The Woman in Black 2: Angel of Death.)

Fantastic Four was a misfire, but with enough residual hints of something interesting to keep it off My List of Shame. I rather enjoyed Jupiter Ascending and Tomorrowland. Lost River was a self-conscious compendium of arty-farty clichés (an underwater town! a decadent nightclub!) reminiscent of other, better films, but its very awfulness was compelling, which is good enough for me.

For some reason not unconnected with good sense and antipathy towards the original films, I failed even to see Ted 2, Hot Tub Time Machine 2 and Paul Blart: Mall Cop 2, and disliked Entourage on TV enough to make me steer well clear of the film version.

But for a variety of reasons, I really wanted to like the films on this list, and each of them let me down dreadfully. They might not have let you down, and if that’s the case I’m very happy for you, but they left me as smarting and resentful as a bride jilted at the altar, even though three of them featured cats.

Hell hath no fury, so I’ve taken my revenge by booking these films in to Hell Multiplex, repository of all that I found most excruciating and tedious in 2015. In an ideal world, those responsible for my torment will be obliged to watch their own pieces of bilge non-stop, day and night, with their eyelids pinned open Clockwork Orange-style, until they finally understand what they’ve done to upset me and start begging for mercy.

Moving curtains, incense… Having to take notes to keep myself awake…Who are all these guys with beards? Deliberately obtuse or just inept? No idea who’s fighting whom and why… a Chinese Angelina Jolie…  Weibo? Asbo? Courtesan goes up in flames… Cute goats. Yes, yes, the landscape is nice, OK, we know. Image very contrasty. Final credits bagpipey music is great.

I love the films of King Hu and Chor Yuen. I enjoyed Crouching Tiger, Hidden Dragon and Hero, but am less fond of other auteur attempts to repurpose wuxia  for arty-farty purposes, primarily because arthouse directors think it’s clever to stage  the combat scenes in incomprehensible but passably pretty ways in an attempt to hoodwink audiences into thinking it’s Great Art, as opposed to ineptly staged action and/or drama.

You can keep your Ashes of Time and The Grandmaster, and you can really keep this inert load of old trope from critic’s darling Hou Hsiao-Hsien. I tried to like it, I really did, and I realise I’m in a minority here (Sight & Sound critics voted it best film of 2015) but for me it’s arthouse wankery of the most pernicious kind from a director who wilfully neglects the most fundamental pleasures and craft of his chosen genre, because he’s such an auteur he knows that everyone will lap it all up anyway.

Into the Woods, it’s dark and deep
It makes me want to go to sleep
But first I have a film to see
Where everyone sings endlessly

A witch! It’s Streep with bad dent-ist-ry
She and baker have sad history
Corden (not half bad) and Blunt
Are sent off on a treasure hunt

Well gosh we never saw before
The woods are full of metaphor
But now the subtext’s clear to see
Desire and fear! Who knew? Not me!

Some day your prince will come for you
Be careful what you wish for too
Don’t be selfish, don’t be mean
Don’t throw away your magic bean

My antipathy towards Ana Lily Amirpour’s arthouse favourite was no doubt amplified by people telling me in advance how much I would love it. It’s a vampire movie, they said! There’s a cat, they said!

I was hoping for a genuine Iranian vampire movie, but this was shot in California, with chador, Persian dialogue and subtitles giving it a gimmicky sense of the exotic rather than being integral to the story. It also shows evidence of its writer-director having seen way too much Jim Jarmusch, whose work already tends towards the mannered and derivative (exhibit A: the assassination set-pieces in Ghost Dog: Way of the Samurai, which simply replicate scenes from Seijun Suzuki’s Branded to Kill) and substitutes cool posing for a well-crafted plot and characters.

Being the opposite of a Sean Penn fan, I might not have bothered with this had it not been adapted from one of my favourite French polars, Jean-Patrick Manchette’s Le position du tireur couché – highly recommended if you can read French and feel like tackling a shortish novel – the language is simple and straightforward without being dumb, and there’s a big streak of weary gangster fatalism à la Jean-Pierre Melville.

Penn plays a former special ops agent with dark history in the Congo and a head injury that means he has to avoid loud bangs, which is a bit of a problem if you’re a gunman.  The action flits from Barcelona to London and there’s solid back-up from Idris Elba, Ray Winstone, Mark Rylance and Javier Bardem. Had it it starred anyone else, it might have been a passable action thriller.

But this is Penn, who probably fancied himself as a superannuated action hero along the lines of Liam Neeson in Taken. And Penn, alas, is no Neeson. He’s like the Bono of film acting – all sweaty close-ups and grimacing into mirrors and posing in shades and LOOK AT ME, I’M ACTING mannerisms that somehow manage to suck all the energy from the screen.

Oh, and there’s a woman who gets kidnapped.

The perfect film for anyone who thinks action movies are being ruined by too many women. The female characters are reduced to crude sexual trophies and a smutty joke about anal sex. This is Harry Potter reimagined as a wet dream cartoon, with Hogwarts as a school for (nearly all male) secret agents, with a dash of the sort of hackneyed snobs vs slobs scenario familiar from traditional British sitcoms (Keeping Up Appearances etc). More imagination and care was put into its gimmicky scene transitions than into the story, which superficially resembles that of Channel 4’s Utopia, but without any of its flair or invention.

I like an exploding head as much as the next gorehound, but the comic ultra-violence is patronising, mean-spirited and quite unpleasant – the fact that audiences are meant to find it funny is extremely dispiriting.

One hundred and six minutes of Johnny Depp doing a bad Terry-Thomas impression, with a badly blacked-out gap between his two front teeth. Plus a running gag about his moustache, which isn’t funny to begin with, and certainly doesn’t get any funnier as it’s run into the ground.

mugging, gurning, twitching… comedy music… eye-rolling tics and twitches… “It looks like you have a vagina on your face” … filmed around The Oval… some half-hearted vomiting… oh hurrah Jeff Goldblum… spoof of a Euro spy spoof that was already spoofed (more successfully) in Austin Powers…

This is what I think about Johnny Depp. I also think he was OK as Whitely Bulger in Black Mass, but no more than OK – it was a one-note performance with zero character development, and the film should have been more about Joel Edgerton’s FBI character, with Bulger as a menacing presence on the sidelines. 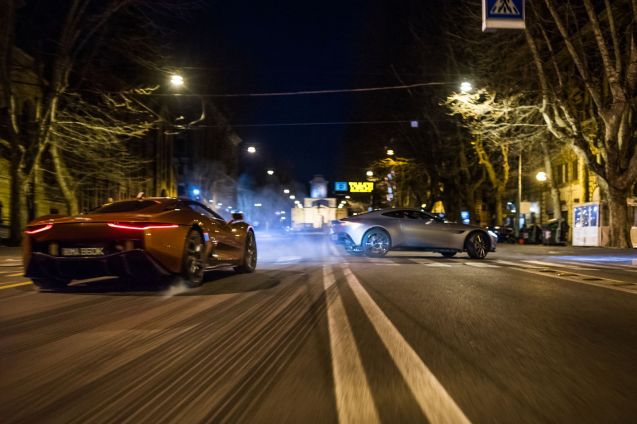 “It was me, James. The author of all your pain.”

A sponsored puff piece in the Daily Mail bragged that £24 million worth of cars were destroyed during the making of the twenty-fourth Bond movie. For that money I could have made forty-eight movies, all of them more fun than this. After a promising opening during the Mexican Day of the Dead, the action almost immediately gets bogged down in an endless incoherent fight in a helicopter. And that’s the highlight.

Action scenes: the aforementioned tedious helicopter wrestling, driving quite fast through Rome, a spectacularly dull descent of a mountain in a disintegrating plane.

Sample duff dialogue: “It’s called life, James. You should try it some time.” “You’re a kite dancing in a hurricane, Mr Bond.”

Léa Seydoux gets kidnapped, twice. Monica Bellucci is utterly wasted. Not one but two secret rooms. A fleeting cameo from The White Cat of Evil, though the film-makers don’t care enough to let us know whether or not it escaped the explosions. Plus a really dumb retro-fitted twist which makes you wish they’d inserted flashbacks showing scenes from older Bond films with Christophe Waltz inserted Zelig-style into the footage, which at least might have been entertaining in an awful way.

Most boring Bond theme song ever. Most boring henchman ever. Bond strolls straight into the villains’ lair – twice! though for no discernible reason, since he doesn’t appear to have any plan of action and has trouble escaping from both places.

Oh, and that brother that Bond forgot he had? Pfff.

Spy was a better action film, and had better roles for women and cleverer dialogue. See that or Mission: Impossible – Rogue Nation instead.

My notes on Spectre, in full.

More comic ultra-violence that doesn’t work on any level. Ryan Reynolds serial killer POV horror-comedy, with disposable female characters. He cuts them up and keeps their body parts and/or severed heads in his fridge. Because the cat tells him to. It’s a nice gingerpuss called Mr Whiskers, and has a Scottish accent.

It’s hard to tell if the unpleasantness is intentional or accidental. Either way, the tone is all wrong. Big fail, despite the cat.

The Woman in Black 2: Angel of Death

Basement full of artefacts…… spooky drawings… hide and seek… orphanage… dolls… rocking chair… stains on the ceiling… This recycles so many horror movie tropes it’s almost like Cabin in the Woods played straight, but alas fails to insert them into a proper story. Oh god, here’s that stupid Woman in Black again. Get over yourself, Woman in Black, leave the kids alone, stop slamming doors and leave us in peace. You were scary once, but now you’re just annoying.

13 thoughts on “NOW SHOWING AT HELL MULTIPLEX: MY LEAST FAVOURITE FILMS OF 2015”