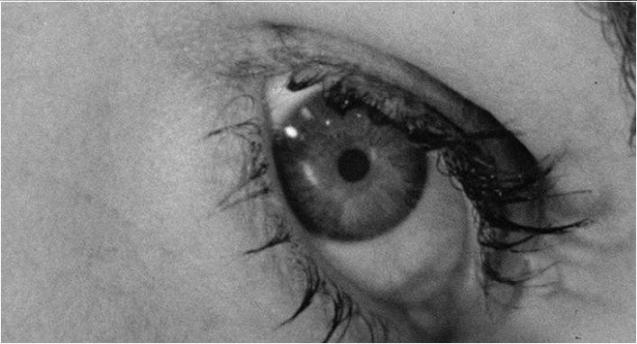 The choice of viewpoint is one of their most important decisions a film-maker has to make, because it indicates not just whose story is being told but also, by extension, how it should be filmed. After the discovery of an abandoned car on a ferry and a shot of its driver’s corpse washed up on a beach, Ewan McGregor is present in virtually every scene of Roman Polanski’s The Ghost. He’s the film’s eyes and ears, our surrogate in the story, our entry-point into this world, right up until the film’s final shot.

Polanski has always excelled at this form of first person storytelling. Although the protagonists of Repulsion, Rosemary’s Baby, Chinatown, The Tenant, The Ninth Gate and The Pianist can frequently be seen within the frame, the unfolding story is nevertheless filmed from their point of view. This is achieved so seamlessly that we might as well be inside their heads, even though, in these cases, this approach never calls attention to itself, so we barely notice it. It’s as near as a film can get to the first person voice of written fiction without adding gimmicks such as voice-over narration or subjective camerawork.

Alfred Hitchcock was another master of first person. We watch Rear Window entirely from the viewpoint of James Stewart, who is himself watching from the apartment where he’s laid up with a broken leg. In Vertigo and North by Northwest, we tag along with James Stewart or Cary Grant, just as mystified by the twists and turns of the plot as they are, until, almost grudgingly, the director cuts to another, more neutral point of view to explain to the audience (if not to the character) what’s going on.

The decision to cut to another point of view is a valuable tool in the storytelling kit, though it’s often used thoughtlessly. At what point should the audience be fed information to which the story’s protagonist is not privy? And will that make them more or less engaged with the central character? The revelation of both the randomness and hopelessness of Cary Grant’s predicament in North by Northwest actually tightens the screws, since the new information makes the audience aware that no-one will be coming to his rescue.

When, in Sicario, Dennis Villeneuve abandons Emily Blunt’s point of view and switches to that of Benicio Del Toro, I would contend that most of the tension drains out of the narrative, since we’re no longer sharing her experience but looking on it from a more detached and (in Del Toro’s case) less vulnerable viewpoint. Perhaps it was Villeneuve’s intention to reduce Blunt to an increasingly irrelevant onlooker to drive home his sociopolitical point, but it distanced this particular viewer and thumped home the film’s “message” in a surprisingly crude way.

Hitchcock is more cunning. Part of the shock effect of Psycho is that when our heroine is murdered in the shower, the point of view we’ve been sharing for the past 45 minutes is abruptly yanked away, forcing us to transfer allegiance to the nearest surviving character at hand – we’re like the disembodied demonic entity looking around for someone else to possess in Fallen. In Psycho, of course, that “someone else” just happens to be Norman Bates.

The view from James Stewart’s room in Rear Window (1954)

Naturally, when we’re seeing events through a protagonist’s eyes we’re also vulnerable to sharing the same errors of perception. Like Jack Nicholson in Chinatown, we assume Faye Dunaway is a duplicitous femme fatale until, like him, we’re forced to consider another point of view. Or hearing with a protagonist’s ears, in the case of surveillance expert Gene Hackman in The Conversation, where we’re nudged into misinterpreting a vital line of dialogue, until – too late – we finally realise the real significance of what we heard.

And we’re now so familiar with film grammar that we take its conventions for granted. Films are peppered with subjective shots, but most of the time we don’t register the fact. For example, whenever there’s a close-up of a character looking at something, we assume the next shot will be of whatever they’re looking at, from the character’s point of view. In other words, it’s a subjective shot. If this revelatory subjective shot is postponed or withheld, the effect can be disconcerting or even frightening. Korean director Kim Jee-woon is an expert at delaying and withholding P.O.V. to scary effect, as can be seen in his segment of the portmanteau horror movie Three (2002) and in this scene from A Tale of Two Sisters (2003):

Subjective shots which extend beyond a few moments, on the other hand, are hard to miss. They often feel gimmicky or even physically upsetting. The impressionistic blur of the first reel of The Diving-Bell and the Butterfly traps the viewer in Jean-Dominique Bauby’s locked-in syndrome so efficiently that, at the screening I attended, one stricken filmgoer had to be helped from the cinema.

Horror films, of course, stand and fall by their point of view. The Faux Found Footage fad has placed (usually fuzzy or wobbly) subjective camera sequences centre-frame, but we long ago became accustomed to the camera standing in for slasher-movie psychokillers who are stalking their victims, a device used to such creepy effect by John Carpenter in Halloween (1978). However, reversing the viewpoints of psycho and potential victim is fraught with peril in the hands of lesser film-makers; I’ve written here about how the fluctuating point of view dissipates the tension in The Woman in Black (2012).

Whenever our heroine is desperately searching for somewhere to hide, and then the point of view abruptly switches from her point of view to that of the psycho who is stalking her, I relax. There’s no need to worry about the heroine’s wellbeing so long as we’re sharing her stalker’s P.O.V. – because now the hunter has been placed in the role of the hunted, and all we have to do is wait for our heroine to go on the offensive. There’s a splendid example of this at the end (big spoilers!) of Nighthawks (1981) where a psychotic terrorist (Rutger Hauer) is preparing to murder the N.Y.P.D. detective who has thwarted him.

Subjective viewpoint combined with the withholding of the revelatory shot can also work beautifully in comedy. In The Nutty Professor (1963), when Jerry Lewis drinks his Doctor Jekyll potion he switches to first person P.O.V., so that we share his point of view the shocked reactions from passers-by as he walks along the street, followed by heads swivelling towards him as he enters the nightclub – all this laying groundwork for the delicious reveal that he’s not the hideous Mr Hyde-like creature we were expecting, but “Buddy Love”, a slick lounge lizard who has been attracting everyone’s attention because of his preternatural cool. 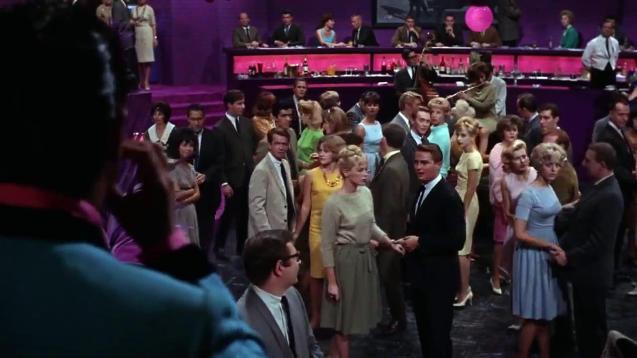 Jerry Lewis entering the nightclub in The Nutty Professor (1963)

Most prolonged subjective sequences include at least part of the character’s back in the frame, as you can see in this still from The Nutty Professor. The extended Steadicam shot in which we follow the characters, thus sharing their viewpoint as they advance, has become an almost obligatory flourish of Hollywood auteurism, exemplified by Danny exploring the Overlook on his tricycle in The Shining or Henry and Karen entering the restaurant via the kitchens in Goodfellas.

Most of Brian De Palma’s films have at least one extended Steadicam sequence, often illustrating one character stalking another like James Stewart following Kim Novak in Hitchcock’s Vertigo, though De Palma rarely lingers for too long on his protagonist’s back, and knows how to ring the changes so he doesn’t seem to be repeating himself. Darren Aronofsky has almost made the Steadicam-follow his signature move, as can be seen in this supercut by Jacob T. Swinney. Gus Van Sant made recurring use of this sort of shot in Elephant (2003) (echoing the first-person shooter games to which the film alludes) and Derek Cianfrance used the conceit to kick off The Place Beyond the Pines (2012). Maybe it’s time for directors to find a new way to flash their auteurist credentials.

To date, the only commercial movie to use unadulterated subjective viewpoint all the way through is Lady in the Lake, seen through the eyes of Philip Marlowe (played by the director, Robert Montgomery, whose face can occasionally be glimpsed in mirrors) and in which the camera itself seems to get punched, blow cigarette smoke into a cop’s face or turn to ogle a dame. “You play the starring role!” trumpeted the trailer, in a foreshadowing of today’s interactive video games, or music videos such as the one for Prodigy’s Smack My Bitch Up, parodied so brilliantly here with a cat’s eye view.

Movie adaptations of video games, meanwhile, never seem to pull off the subjective experience of game-playing itself. The only memorable sequence in Doom is when the ho-hum action temporarily switches to the sort of first-person shooter set-up in which the original game is played, but so far, the nearest anyone has come to stretching this format out to feature-length is Van Sant with the aforementioned Elephant, where it seems almost designed to alienate casual game-playing audiences who might stumble across these “scenes with tracking shots of heads” (as described by a  disgruntled viewer on the imdb message boards).

Or maybe it’s just that gamers would rather play than watch.

A version of this post first appeared in the Guardian in April 2010, to tie in with the U.K. release of The Ghost. It has since been edited and expanded.

3 thoughts on “WHO’S LOOKING AT YOU, KID? THE FIRST PERSON VIEWPOINT IN FILM”