There are few experiences in modern cinema quite as intoxicating as watching Eva Green behaving badly. Whether she’s an American housewife on the verge of a nervous breakdown in White Bird in a Blizzard (2014), or fixing those deep turquoise eyes on her oppressors in the revenge western The Salvation (2014), or wrestling demons in the TV series Penny Dreadful (2014-2016), it’s impossible to tear your gaze away.

Green is an enigma, hiding in plain sight. She’s a femme fatale with as many female admirers as male ones, a Bondgirl who all but ate Bond for breakfast. Her beauty is of the troubling sort that drives prim conformists mad – they’re forever wanting her to fix her teeth, go easy on the eye make-up, tone down the witchiness and look like everyone else. Onscreen nudity is no big deal for her (as it tends not to be for French actresses) yet somehow, the more she reveals, the more enigmatic she becomes.

Green, whose mother is the actress Marlène Jobert, made her screen debut in Bernardo Bertolucci’s 2003 film The Dreamers (2003); she and Louis Garrel (another scion of a French film dynasty) were cast as Parisian siblings who form a threesome with visiting American Michael Pitt during the student riots of 1968. All three actors look heartbreakingly young and beautiful as they puff away at coloured Ziganov cigarettes, quote from Cahiers du Cinéma, or do sexy things to each another. Green already had something of the old soul hovering around her, but I wasn’t the only one to dismiss her as just another starlet parlaying her family connections into an acting career. Mea culpa. 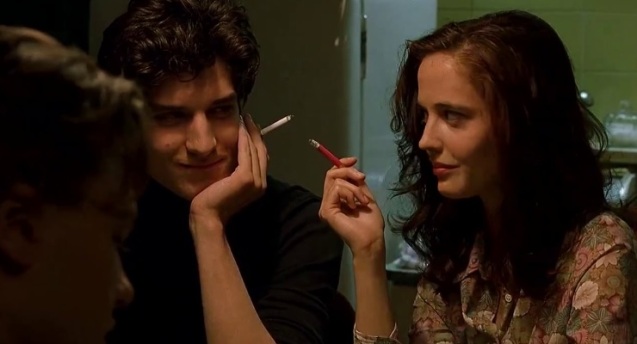 With Louis Garrel in The Dreamers (2003)

She was mostly required to model exotic head-drapes in Kingdom of Heaven (2005), Ridley Scott’s crusade epic, though I’m told her role as Orlando Bloom’s love interest made more sense in the longer Director’s Cut. Then, in 2006, came Casino Royale (2006), the gritty James Bond reboot that introduced Daniel Craig in the role of 007. As Bondgirl-in-chief Vesper Lynd, Green was sensational.

Like the best Bond women – Diana Rigg as Tracy in On Her Majesty’s Secret Service, and Judi Dench’s “M” in Skyfall – Vesper was destined for the fridge, not least because Ian Fleming killed her off in the original novel, and with one of his most notorious one-liners: “The bitch is dead.” But before Vesper went to her watery grave, she managed to turn the tables on 007’s thinly veiled chauvinism and match him, quip for quip. It didn’t hurt that she also looked stunning in the Versace gowns, with her smoky eyes and almost imperceptible overbite ensuring her face was never, ever boring. No wonder Bond fell in love with her. We all did. 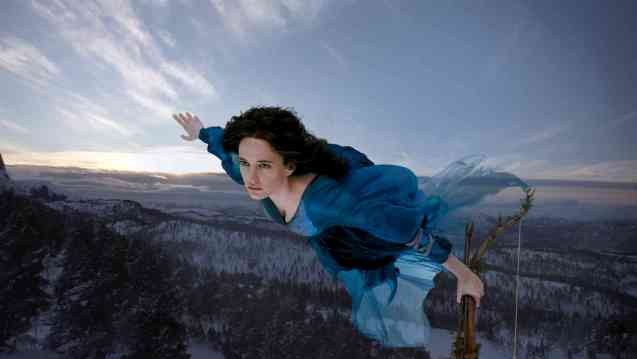 She was impeccably (or impekkably) cast as flying Finnish witch Serafina Pekkala in the enchanting children’s fantasy The Golden Compass (2007) adapted from Philip Pullman’s novel Northern Lights. While the film had an iffy crittical reception, it was far from being the flop religious pressure groups would have you believe – and I would have gladly watched the further adventures of Green’s Serafina and aeronaut Lee Scorseby, played by an equally well cast Sam Elliott. After putting the witch back into bewitching with Wong Kar-Wai’s exhilarating ad for Dior’s Midnight Poison, the actress slipped below the mainstream radar for a few years, appearing in a series of flawed but ambitious and eccentric low budget productions.

She was spiky and intense as a troubled art student in the parallel reality drama Franklyn (2008); seductively neurotic in Cracks (2009) as a diving instructor at a girls’ boarding-school; unwavering in Womb (2010) as a woman who gives birth to a clone of her dead soulmate (Matt Smith); helpless in Perfect Sense (2001) as an epidemiologist falling in love with chef Ewan McGregor while a mysterious virus robs the world of its senses.

She erupted back into the mainstream in 2014 with 300: Rise of an Empire. The Greeks in the film keep talking about The Hot Gates, but Green pretty much IS The Hot Gates. As the vengeful Artemisia, sporting black leather breastplates and gold stegosaurus spikes, she makes mincemeat of anyone who enters her orbit. Likewise in Sin City: A Dame to Kill For (2014), where she leaves it to the American starlets to strap themselves into fetish garments, and steals the show by mostly just going naked. “She owns me, body and soul,” says Josh Brolin, and yep, you sympathise.

It was at this point that I started to wonder if Eva Green wasn’t just an actress but an entire genre unto herself. If a film is unable to hold its own without her (and imagine how dull a Greenless 300: Rise of an Empire or Sin City: A Dame to Kill For would be) her eyes have the gravitational pull to draw you in and make everything revolve around her. It’s not hamming, nor is it selfish look-at-me acting – it’s presence. She is there and giving it 100%, even if no-one else is taking it seriously.

In Tim Burton’s woefully misconceived Dark Shadows (2012), she goes blonde as the vengeful witch Angelique, whose jealousy is co-opted as the motor for the entire lazy screenplay, which couldn’t care less about giving her character any shred of nuance or ambivalence. All the same, Green comes close to pulling it off, though Barnabas Collins’s refusal to surrender to her passion seems pointless and perverse. There was gossip about an offscreen liaison, but no evidence of it onscreen; on the contrary, Johnny Depp’s prissy, peculiarly asexual performance as Barnabas the vampire makes you wonder what Angelique ever saw in him. It’s a film full of interesting actresses (Green, Michelle Pfeiffer, Helena Bonham Carter, Bella Heathcote) obliged to revolve around the actor’s redundant stockpile of empty mannerisms. If only Depp had been encouraged to play it straight and sincere instead of fussy and fey, and left it to the ladies to do the emoting, then we might have had something.

In Gregg Araki’s White Bird in a Blizzard, Green’s character is missing for much of the film, but she’s too strong a presence not to haunt it, even in absentia. And in the Anglo-Danish-Spanish The Salvation, she is reunited with her Casino Royale co-star Mads Mikkelsen. Her role as a mute deprives the actress of one of her greatest weapons – that husky voice, with its preternaturally precise English accent, but her supremely eloquent eyes do the talking for her, and she makes even a disfiguring facial scar look cool as well as badass.

As for TV, casting her as Arthur’s malevolent half-sister Morgan in the 2011 series Camelot seemed like a no brainer, but the show was surprisingly dull, and wasn’t renewed. Fortunately, she found her signature role in a livelier affair, as Vanessa Ives, the de facto protagonist of the TV show Penny Dreadful, in which the monsters of 19th century English horror fiction co-exist in Victorian London.

Those of us unconvinced by the show’s pilot episode were converts by the end of the second, thanks to the scene in which Vanessa is possessed by spirits at a séance, where Green the actress breaks out the big guns in a sustained tour de force of eye-rolling, weeping and speaking in tongues. It’s shocking, mesmerising confirmation of the character’s dark side, but as an Eva Green showreel it’s just a teaser. Because just when you think she has gone about as far as an actress can go, she goes further. Let’s hope she never learns to behave.

ETA: I’m not sure the stories in Penny Dreadful were worthy of either Green or her character (at the time of writing I still haven’t seen Season 3, but I pretty much know what happens and suspect it will only confirm this sentiment) but it’s an unfailingly handsome-looking series and an exquisite showcase for her talents.

With Ewan McGregor in Perfect Sense (2011) 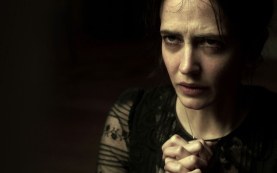 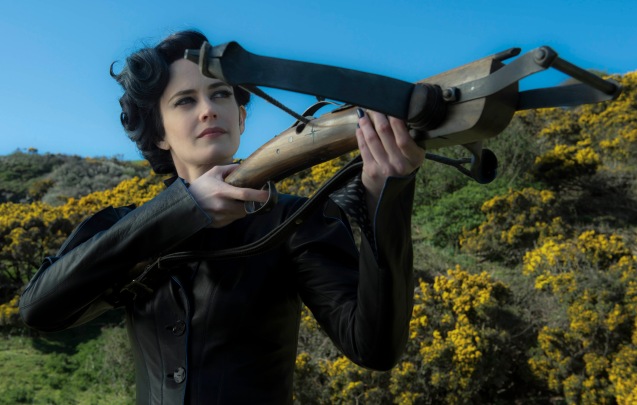 Miss Peregrine’s Home for Peculiar Children (due for release in late 2016) Photo by Jay Maidment.

This piece was first posted on the Telegraph website in March 2015. It has since been edited and added to.

16 thoughts on “THE AWESOMENESS OF EVA GREEN”