What makes Jeremy Saulnier’s Blue Ruin stand out from other revenge thrillers is its hero – if you can call him that. Dwight, played by Macon Blair, is an average guy, with average skills. He is neither brilliantly clever, nor eyeball-rollingly stupid – though, like most of us, he has moments of cunning and idiocy. He clearly does not spend all day at the gym; if he looks like a movie star at all, then it’s a paunchy mid-period David Hemmings.

But this is what makes Blue Ruin so refreshing – here is an ordinary guy in an extraordinary situation. Not only does he make the sort of mistakes we’d probably all make in similar circumstances, he also finds that violent revenge has messy consequences, just as it does in real life. And Saulnier pulled off the same trick with his next film, Green Room, in which Pat (played by Anton Yelchin, who was shaping up to be the definitive everyman actor of his generation before his death in a freak accident in 2016) and his punk rocker bandmates find themselves pinned down by heavily armed neo-Nazis, with nothing to defend themselves with but pluck, luck and their wits.

The stories might be straightforward, but the very fact that their central characters are regular guys in possession of no more than average abilities gives the films a bracing unpredictability in this age of heroes who, like Jason Bourne, can emerge unscathed from car crashes that would mangle a lesser being. These days, the superhero is not limited to superhero movies; he has spread like a contagion throughout the thriller and action genres. Which is fine for a bit of cartoony escapism, but this indomitable ubiquity has congealed into a formula that is now just begging to be tweaked.

Jack Ryan: Shadow Recruit might start out in a desk job, but before the film is up he’s single-handedly rescuing his fiancée from the bad guy’s clutches and crashing vehicles into rivers like a born Übermensch. Ryan, Jack Reacher and The Expendables are so invincible that vulnerability has to be farmed out to secondary characters, usually women, who are so repeatedly abducted by the villains and rescued by the heroes it’s a wonder they don’t end up with whiplash.

Sometimes the hero is disguised as an everyman – though of course he turns out to be nothing of the sort. Bruce Willis in the Die Hard movies has some appealing early moments of weakness – having to pick his way in bare feet across a floorful of broken glass, for example – but it’s not long before he is leaping off buildings like Superman. Liam Neeson in Taken might look like a slightly better-looking version of your dad, but you’d better watch out if you kidnap his daughter, because he possesses the sort of CIA training that leaves a trail of corpses behind him and almost makes you feel sorry for the kidnappers.

The ne plus ultra of this tendency, and probably the definitive commentary on it, is Viggo Mortensen in A History of Violence. This apparently average pillar of his smalltown community reacts with surprising efficiency when a couple of thugs cause trouble at his diner, and finds his secret past as a hired killer bubbling up to haunt him and destabilise his new-model family life.

Viggo Mortensen in A History of Violence (2005)

But who was the last authentic everyman hero? Alfred Hitchcock’s North by Northwest might have been the ultimate study of an ordinary man suddenly thrust into a deranged plot full of spying and stabbing and dangling, but selecting Cary Grant, the man all other men want to be, as your Mr. Average is surely tongue-in-cheek casting. Arnold Schwarzenegger was gloriously miscast as an everyman in Paul Verhoeven’s Total Recall, which rather missed the point of Philip K. Dick’s regular schlub turning out to be a glamorous interplanetary superspy, though of course Arnold does have other assets to bring to the party.

When “funny-looking” (ie ordinary-looking) actors like Steve Buscemi and Philip Seymour Hoffman make big budget thrillers, they’re invariably cast as villains, not heroes, who are still supposed to be square-jawed he-men with rippling biceps and preternaturally defined six-packs. I guess casting against type is perceived as too much of a risk in big studio productions, and it’s down to independent film-makers like Saulnier to give the formula a shot in the arm.

If there is a twist in Blue Ruin or Green Room, it’s that Dwight and Pat don’t turn out to be ex-CIA agents, or former hitmen, or trained survivalists or karate experts who can overcome their foes and restore the status quo with a show of superior force. It makes you realise how rare it is for thrillers nowadays to be founded in any sort of physical or psychological realism, and reminds us how well-crafted exceptions are as much character studies as thrill generators. 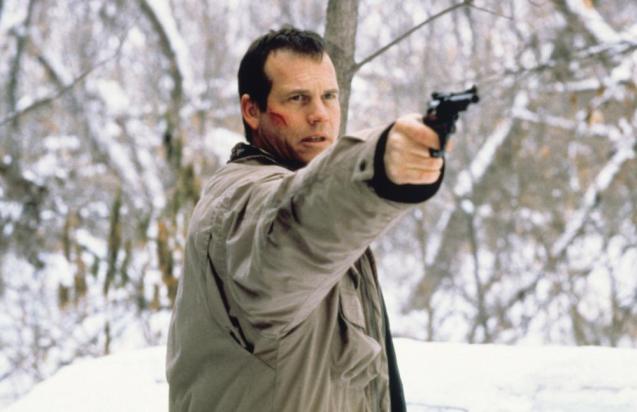 I’m thinking of films like Sam Rami’s A Simple Plan, in which a series of bad decisions turn a regular guy into a multiple murderer, Morten Tyldum’s Headhunters, in which the hero is short and funny-looking (though admittedly he does moonlight as a hi-tech art thief), or Fred Cavayé’s Pour Elle (remade in 2010 as The Next Three Days, starring Russell Crowe) in which Vincent Lindon’s mild-mannered schoolteacher is forced a long way out of his comfort zone to hobnob with sleazy elements of the Parisian underworld in order to bust his wife out of jail.

Such thrillers are not the usual random assemblies of dei ex machina – buttons that need to be pressed, conspiracies that need to be exposed, nuclear explosions that need to be averted, all piled on top of each other willy-nilly. Instead, the escalating mayhem is a logical result of everyman protagonists making plausible choices, trying to cover up minor misdemeanours by committing major ones, or inadvertently tangling with the wrong crowd. Their stories may be extraordinary, but the behaviour is recognisably human, every step of the way.

Not your average everyman – Cary Grant in North By Northwest (1959)

This piece was first posted on the Telegraph website in May 2014. It has since been expanded.

8 thoughts on “WHERE HAVE ALL THE EVERYMAN ACTION HEROES GONE?”