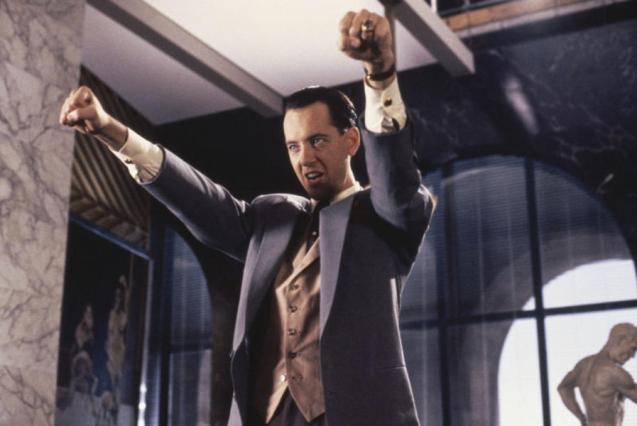 In 1991, GQ magazine sent me to interview Richard E. Grant, to tie in with the British release of Hudson Hawk and possibly also something to do with Cerruti, who had provided wardrobe for the leading actors, and whose clothes Grant would be modelling for the photoshoot that would accompany the article. The release date was still some months away, so a screening was laid on just for me.

I didn’t know what to expect, but had enjoyed Michael Lehmann’s debut feature, Heathers. It quickly became apparent that Hudson Hawk was another quirky cult movie, but this time inflated to blockbuster size and overburdened with star power and special effects. I was put off by an opening heist scene in which Bruce Willis and Danny Aiello synchronise their actions by crooning Swinging on a Star, since I’d loathed that song since childhood, when my big brother had kept singing, ‘Or would you rather be a PIG?’ at me. The tone and story seemed all over the place: Leonardo da Vinci’s gold-making machine, a railway beneath the Vatican, secret agents named after candy bars…

Gradually, though, the film’s wilder elements began to grow on me; I liked James Coburn (as ‘George Kaplan’) making a sick joke about the 1986 Challenger disaster; David Caruso (whom I knew from Abel Ferrara films and Michael Mann’s ultra-cool TV show Crime Story) as a mime artist; gratuitous soft toy abuse; Andie McDowell impersonating a dolphin… And then there were Richard E. Grant and Sandra Bernhard as Darwin and Minerva Mayflower, a brace of billionaire villains so histrionic it was as though they’d had nitrous oxide pumped directly into their brains.

Even then, it was obvious the movie would flop; it was too eccentric and uneven for mainstream audiences, and Bruce Willis, who not only starred but had a story credit, had vexed critics by contemptuously belittling their entire profession at a recent press conference. As the first American reviews began to trickle in, it seemed that critics were getting their revenge. ‘A relentlessly annoying clay duck that crash-lands in a sea of wretched excess and silliness’ (Variety); ‘a sprawling, dissociated mess’ (Entertainment); ‘a colossally sour and ill-conceived misfire’ (The New York Times)

My interview with Richard E. Grant took place at the photographer’s studio in Clerkenwell. He immediately endeared himself to me by bad-mouthing my ex-boyfriend. I can’t recall the exact term used, but it was agreeably colourful. 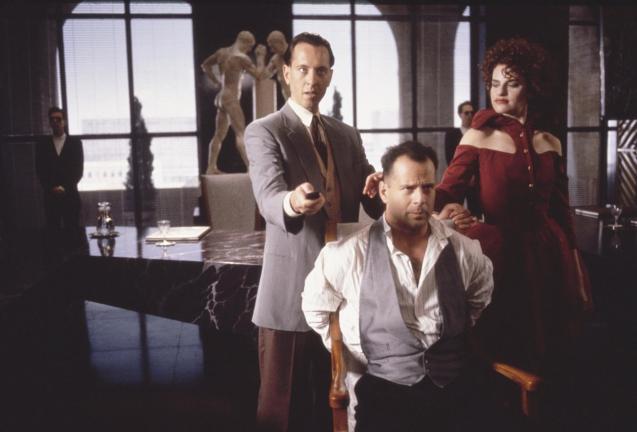 A drama professor once told Richard E. Grant he would never make it in the movies because he had a face like a tombstone. Since proving the drama professor wrong, Grant has also been referred to as ‘lantern-jawed’, ‘sepulchral’ and ‘hollow-cheeked’, while The Hollywood Reporter once described him as ‘a handsome wet rat’.

‘Wet rat,’ echoes Grant, who is hearing this one for the first time and appears to be overlooking the ‘handsome’ reference, ‘that’s very endearing. Thank you, Hollywood Reporter.’

But Grant’s face is something more enduring and bankable than merely handsome – it is striking and memorable, and he has screen presence in spades. He has offscreen presence in spades too, as well as a rather wonderful way with words. The Government’s recently announced donation to the British film industry of a couple of million pounds, to be spread over the next four years, is, as he says, ‘about as helpful as sticking a clove of garlic up a dead donkey’s arsehole and telling it to canter.’

Born in 1957, he grew up in Swaziland on a diet of movies, and always wanted to be a film star. ‘I assiduously followed Donald Sutherland’s career, because he’d grown up in a small town in Canada, was over six foot tall, had a very long face, and didn’t look like Robert Redford. And his career has been so varied and peculiar that I thought if he could do it, so could I.’

Grant studied English and drama at university in South Africa before co-founding the multi-racial Troupe Theatre Company. He arrived in London in 1982 and after a couple of years in fringe and rep, Plays and Players magazine nominated him ‘most promising newcomer’. Then there was Withnail & I, since which he’s never looked back. He appreciates the irony of a performance as an out-of-work actor leading to so much work. 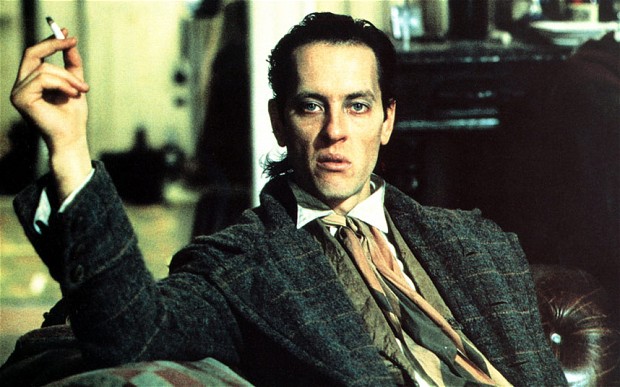 He can play straight man with the best of them, and did so in Henry and June and L.A. Story, in which he played regular guys who lose their girls to the other guys. ‘I get kicked in the bollocks,’ he says of L.A. Story, ‘so Victoria Tennant can go off with her real-life husband Steve Martin. It’s a cypher character, but I’m such a huge fan of Steve Martin that I would have played a parking attendant with one line if he’d offered that.’ There’s nothing wrong with cypher characters, they’re the meat and potatoes of an actor’s life, but Grant is too interesting to be consigned to such roles, as a glance at one of his more over-the-top performances will confirm. The E in his name is an Equity-pleasing initial which stands for nothing, but one could almost say it stands for Excess.

His latest film, Hudson Hawk, is a demonstration of excess in all departments. The film was produced by Joel Silver, a past master at turning out violent action-adventure (48 HRS, Lethal Weapon, Die Hard), but not best known for his parsimony. Director Michael Lehman has been praised for the small, quirky cultish teenpic Heathers, but is a relative greenhorn in a big-budget ballpark full of oversized players. Thirteenth-hour replacements of the leading lady (Andie MacDowell for Maruschka Detmers) and Director of Photography (Dante Spinotti for Jost Vacano) sparked rumours of trouble. The $40 million budget was, shall we say, exceeded, and the film’s quirky, cultish qualities have been buried beneath a welter of special effects and frenzied mugging. Being a sucker for excess, I loved it, but the New York critics decided en masse that Willis deserved to be taken down a peg. Hudson Hawk has already been dubbed Hudson the Duck.

Lehman decided he wanted Grant to reprise the sort of arrogant slimeball he had played in How To Get Ahead In Advertising. ‘The fact they cast Sandra Bernhard as my wife gave me a clear indication of the territory we were in,’ says Grant. Bernhard is best known on this side of the pond for her manic supporting performance in Martin Scorsese’s The King of Comedy and has the most expressive mouth since Martha Raye. ‘Working with Sandra,’ says Grant, ‘is like being imbibed by Godzilla’s vulva – fantastical and grotesque by turns, and always funny. She’s very sharp, and we became great friends.’ 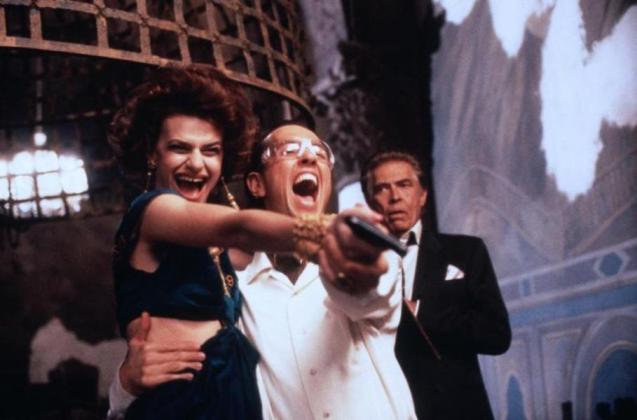 Bernhard and Grant play Minerva and Darwin Mayflower, crazed megalomaniacs who force funky cat burglar Willis into helping them recover the pieces of Leonardo da Vinci’s legendary (so legendary you’ve never heard of it) gold-manufacturing machine. It is to Grant and Bernhard’s credit that they emerge from the mayhem with flying honours.

Dressed in Cerruti 1881 finery, Darwin is the type of character who stands on tables waving his arms and ranting about world domination. ‘People said, ‘What’s the character basis of what you’ve done?’ says Grant. ”Are there any people who are like this?’ Well, Joel [Silver] is like this. You see Joel speaking on the telephone to someone he doesn’t like, and it’s a huge megablast.’ Grant and Bernhard dreamt up another source of inspiration in the idea of Donald and Ivana on mescaline. ‘Vanity Fair always has these profiles about Prince von Stuppelwasser eating diamonds for breakfast, fucking his dog, feeling up the butler, and sticking his finger up the Oldsmobile exhaust pipe,’ says Grant. ‘I don’t think you can go too far in inventing – not even inventing – just trying to do what these exceptionally rich and privileged people get up to.’

With Mayflower, Grant joins Anthony Hopkins, Alan Rickman and Steven Berkoff with one of those larger-than-life villain roles which Hollywood likes to fill with British actors. For a film actor in a defunct British film industry, the alternative to Hollywood migration is staying here and doing theatre or TV, maybe appearing on screen in the occasional deadbeat farce such as Killing Dad (adapted from Ann Quin’s novel Berg), a waste of a fine cast and an equally fine haircut – the deconstructed-Aubrey Beardsley-look which Grant maintains you would spot on a lot of ‘geeky guys’ if you were to stand on Waterloo Station for a while. ‘I fought to have this hairstyle,’ he says. It’s the best thing about the film. 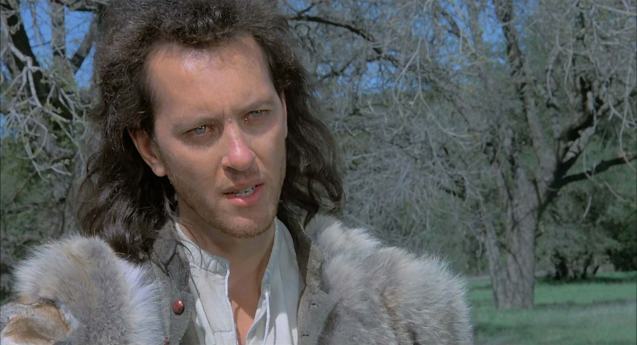 Much more fun was the American schlock-horror potboiler Warlock, in which he plays a witchfinder pursuing malevolent hex-casting Julian Sands from seventeenth-century Boston to present-day Los Angeles. It’s the sort of film in which the hero wears what might pass for a dead sheep in a bad light, and instead of saying, ‘Let’s go’, says things like, ‘Let us tarry not’. Genre film fans, however, will be alerted to its sterling qualities by the presence of Warhol and Corman alumna Mary Woronov in a cameo role as a medium who has her eyeballs ripped out. ‘I did the part because I knew that the chances of me ever being offered a sort of macho heroic part were so slim,’ says Grant, who appears sceptical when I say how much I enjoyed it. ‘I was astonished that they offered it to me in the first place.’

Though his ranting roles have, to date, been the most fun to play and to watch, they have their downside. ‘My wife finds it very hard when I’m playing these,’ says Grant, who is married to dialect coach Joan Washington. ‘The How To Get Ahead In Advertising part drove her nuts. You try not to take it home, but if you’re doing that fourteen hours a day, obviously by the time you get home it’s difficult to just sit down and say, ‘Right, I’ll have a cup of tea.’

This interview was first published in GQ in 1991. It has since been lightly edited, but all quotes are unchanged.