In 1989, the Sunday Correspondent sent me to Rome to talk to the film director Ridley Scott, whom I interviewed over lunch. I don’t recall much, except that he was convivial company, and it was a blisteringly hot day. I also snapped a couple of photos of him; if he seems to be squinting, it’s probably because the sun was shining right into his eyes.

The piece was for the newspaper’s colour magazine, to coincide with the U.K. release of Black Rain. The film itself looked wonderful, but the screenplay was severely undernourished, almost certainly due to a Hollywood writer’s strike taking place during preproduction. But in any case, I decided to expand the article into a reworking of my famous Accessory Theory of Film Criticism, as already expounded in a piece I had written for Time Out in 1984.

IN PRAISE OF SLICK FILMS

Sometimes it’s impossible to tell where the film stops and the commercial begins. Lager ads incorporate clips from old movies, just like Dead Men Don’t Wear Plaid. Jeans manufacturers pay homage to daredevil pilots from The Right Stuff. Middle-aged men run the gamut of Raiders of the Lost Ark perils in pursuit of chocolate oranges, while bewildered account-holders scour a Blade Runner in search of a bank which will treat them like human beings instead of machines.

This last set of commercials was made by Ridley Scott, who directed the film that was their inspiration. Blade Runner (1982) was dismissed on its release as a triumph of style over content, but in the seven years since then it has established itself as a firm cult favourite.

The depiction of Los Angeles in the year 2019 as a mishmash of hi-tech skyscraper and low-rent shanty town changed the face of science fiction cinema; only A Clockwork Orange had previously suggested a dystopia that was a similar blend of flashiness and decay. Scott’s masterstroke was to inject a heavy dose of Far Eastern influence, making it look as if the city had been swamped by its own Chinatown. ‘I had to make a calculated choice about which society would be dominant,’ the director says. ‘I thought about Hispanic, but the way things seemed to be going, I opted for oriental.’ 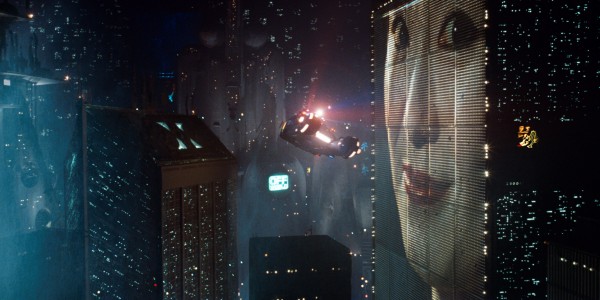 As I write this, we are less than 30 years away from the future world of Blade Runner. [ETA: The source novel, Philip K. Dick’s Do Androids Dream of Electric Sheep?, first published in 1968, was originally set in 1992; in later editions this was updated to 2021. The film is set in 2019.) But that combination of futuristic dazzle and jerry-built sprawl already exists – give or take a robot or two – in Japan. In Scott’s new film, Black Rain, it is almost as if he were filming on location what had previously taken hundreds of special effects technicians and model-makers to mock up. Previous entries in the East-meets-West stakes such as The Yakuza (Robert Mitchum and Ken Takakura) and The Challenge (Scott Glenn and Toshiro Mifune) have been set in Tokyo, but Scott and his producers opted instead for Japan’s second largest city – Osaka.

‘We couldn’t control the elements in Tokyo,’ says Scott. ‘It was never anything specific, but – reading between the lines – the police didn’t want us there. The reaction from the governor of Osaka was the absolute antithesis.’ Even so, some of the filming turned out to be nightmarish. Film-makers are pampered in places like New York City, which falls over itself in an effort to get itself photographed. ‘With a location in New York, you’d know within a phone call how much it would cost,’ says Scott, ‘and then within a week you’d get a clear yes or no, and normally it would be yes.’

The Japanese outlook on life, however, is not conducive to the ‘clear yes or no’ solution. The language is noticeably lacking in a future tense; it’s all suggestives and conditionals, ifs and maybes’, and Scott found it almost impossible to get straight answers with regard to location filming. ‘They didn’t mean to be awkward,’ says Scott, ‘I think it was fear. The police attitude was that we were going to create social disorder on the streets.’ This vagueness firmed up mysteriously, though, whenever the roles were reversed and it was the Japanese trying to get a straight answer from the film-maker. ‘They wanted me to be literal. I had several meetings at the police station, when a committee of police chiefs and bureaucrats produced maps and asked me exactly where my tripod was going to be in three months’ time. I would say, ‘Yes, I want to be outside this shop doorway’, thinking that when I got there it would all change. Not a chance; when I got there, that was where the camera had to be.’

Black Rain is an amalgamation of those two favourite cop thriller formulas: the fish-out-of-water (eg Beverly Hills Cop) and the mismatched buddies (eg Lethal Weapon). Michael Douglas plays a New York City detective assigned to deliver a murderer to the Japanese police; Ken Takakura, veteran of countless Japanese thrillers, plays the detective with whom he comes to share an understanding, after the obligatory initial stages of antagonism and grudging respect. But the plot is hardly the point here; the story is somewhat lacking in the metaphysical department and is not likely to have been improved by the American screenwriters’ strike taking place around the time of pre-production. Black Rain‘s major strength is the way it looks. ‘A lot of people don’t realise the emphasis that’s placed on the production designer,’ says Scott. ‘The cameraman frequently gets all the glory. In fact, the amount of work done before a camera crew gets anywhere near a film is vast. Everything that’s photographed has been chosen either by me or by the production designer.’ The Production Designer on Black Rain was Norris Spencer, with whom Scott previously collaborated on commercials.

Black Rain‘s budget has been estimated at $37 million. Costs leapt when the production withdrew from Japan before filming had been completed. Japanese locations had to be recreated on American soil, but the producers obviously considered it cheaper than staying in Osaka. There’s more than enough authentic Japanese cityscape to give the film its flavour; the emphasis is on fish markets and pachinko parlours rather than Buddhist temples and cherry blossom. There’s the requisite kendo match, but there’s also a scene set in one of those ubiquitous netted enclosures where businessmen practise their golf strokes.

Every motorcycle helmet is shiny and black, every pavement is wet with rain and glittering with reflected neon. Japanese hair lends itself admirably to the art of the photogenic haircut, with enough sunglasses after dark and leather coats to make you weep with desire. [ETA: In fact, a leather jacket is a Very Important Factor in the death of a major character.]

The films of Ridley Scott, whatever other qualities they possess, always look fabulous, as one might expect from a director who went to art college and thence into advertising before making his first feature, The Duellists, with David Puttnam producing. For Scott is one of the ad lads: film-makers who learned their craft in television commercials. ‘People hadn’t realised it was a very legitimate film school,’ says Scott. ‘There’s no other facet of the business which lets you go off and experiment with such an expensive sketchbook. It enables you to refine and understand the process you’re dealing with.’

Scott and his brother Tony, Alan Parker, and Adrian Lyne all started out in commercials, and all make movies which are miles away from the typical British effort, the drab and talky small-screen drama blown up to fill out a larger space. Ad Lad films are big. Ad Lad films are flash. Ad Lads are fond of motes of dust suspended in the sunlight which is filtering through Venetian blinds. Ad Lads like ceiling fans and satin lingerie, soft focus and slo-mo, skies glowering through orange filters. AD Lads like Dolby soundtracks which send vibrations up through the soles of your feet, they like operatic arias and electronic sound effects and hi-tech gadgetry.

But anyone who considers that the Ad Lads are lacking in ‘auteurist’ tendencies should study the work of Tony Scott, who introduced billowing curtains and fluttering doves into his debut feature, the chic vampire pic The Hunger, in which everyone smokes continually and so stylishly that you might be forgiven for thinking it was a feature-length cigarette commercial. After that he managed to get billowing curtains into Top Gun, fluttering doves into Beverly Hills Cop II, and Venetian blinds into just about everything. [ETA: Also fluttering curtains in Days of Thunder; in The Last Boy Scout he swaps the doves for an early flock of pigeons, but manages to hold out for almost an hour before Scott completists are rewarded with their first glimpse of fluttering fabric.]

Commercials aren’t called commercials for nothing; the Ad Lads cater to audiences rather than critics. Even when characterisation and narrative leave something to be desired, the films of the Ad Lads prove that it is not necessarily the depth of feeling or artistic vision which can make a film memorable – it’s the hats, the gloves, the handbags, as well as the billowing curtains and fluttering doves. In other words, the accessories.

This article was first published in The Sunday Correspondent in January 1990. It has been lightly edited.

In the late 1980s and well into the 1990s, Stella Artois produced a series of ads inspired by the film Jean de Florette (1986), drumming home the influence by using the same music as the film – the “Invano Alvaro” duet from Giuseppe Verdi’s La forza del destino. (As a Belgian, I feel I should point out Stella is a fantastically boring beer; if there’s nothing else on offer I generally switch to gin and tonic, or mineral water.)

This one was directed by Jonathan Glazer and features French actor Denis Lavant:

A Terry’s Chocolate Orange ad from the 1980s, inspired by Raiders of the Lost Ark:

An ad for Barclays Bank, directed by Ridley Scott in the style of Blade Runner: