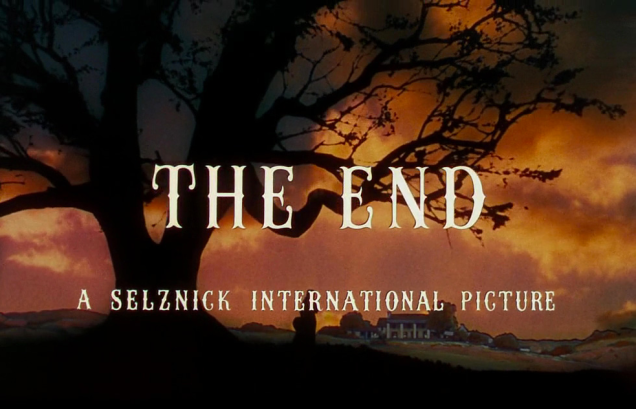 There are two sorts of people in this world: those who head for the exit at the first sign of an end credit, and those who, like me, stay in their seats to see the type of film stock, the copyright notice and the assurance that no animals were harmed.
Those in a hurry to leave often miss out. The end credits of The Great Beauty were accompanied by a sublime boat-trip along the River Tiber. I wasn’t the only viewer to get something in my eye during the credits of The Lone Ranger, which rolled out over an elegiac six-minute shot of old Tonto tottering away into Monument Valley. It was even worth sitting through the credits of the otherwise awful R.I.P.D., just to hear Jeff Bridges singing The Better Man.
Yet there was a time when there weren’t any end credits at all; names of the major players would appear on screen at the start of a film, and that was that. Occasionally there would be a reprise at the end, such as Frankenstein‘s “A good cast is worth repeating”, which added the name of Boris Karloff, whose opening credit had been limited to a question-mark. But most credits stuck to the front-loaded format. All that was left after the memorable last lines of Gone with the Wind and Casablanca was a simple “The End”.

Orson Welles rang some changes. The main cast of Citizen Kane gets the film equivalent of a curtain call, while the end credits of The Magnificent Ambersons are spoken aloud by its writer-director (“I wrote the script and directed it. My name is Orson Welles”). And where there are innovations in credit sequences, there is, inevitably, Saul Bass, who for the end of Around the World in 80 Days (1956) designed an elaborate animated sequence recapping the plot, while the credits for West Side Story (1961) were spelt out in graffiti at the end.

But it wasn’t till the the 1960s and 1970s that big event movies such as 2001: A Space Odyssey, The Godfather, Star Wars and Apocalypse Now began to push credits to the end. The erosion of Hollywood studio power, the rise of the unions and increasing popularity of special effects combined to give us the marathon blockbuster end credit roll as it became a contractual necessity to list even the people who trimmed the toenails of the stars. Little wonder audiences would make a beeline for the exit.

Sometimes, though, there would be something to keep them in their seats. Beginning with Hooper in 1978, stuntman-turned-director Hal Needham began to run montages of outtakes next to the closing credits of his action comedies, often starring Burt Reynolds. Jackie Chan, who played a supporting role in Needham’s The Cannonball Run, took this idea and ran with it, ending all his later films with footage of stunts going wrong, including him breaking his ankle in Rumble in the Bronx (1995).

Peter Sellers, whose bad corpsing habit had become familiar to TV viewers in compilations such as It’ll Be Alright on the Night, was upset when director Hal Ashby added blooper footage to the end credits of Being There (1979), which contained one of his more heartfelt performances. The closing credits gag-reel, often funnier than the film itself, became a favourite comedy coda. A Bug’s Life (1998) was the first animated film to spoof the convention with cartoon “bloopers”, swiftly followed by Toy Story 2 and Monsters, Inc.

Another popular convention is the “Singing and Dancing Sign-Off” added to the credits of otherwise non-musical films such as The Last Days of Disco, There’s Something About Mary (which combined it with a blooper reel) and Slumdog Millionaire. My favourite variation is “Cool Characters Marching”, as seen at the end of the 1984 flop-turned-cult-favourite The Adventures of Buckaroo Banzai Across the 8th Dimension, which Wes Anderson surely had in mind 20 years later when he filmed the finale of The Life Aquatic with Steve Zissou. Jeff Goldblum, incidentally, features in both sequences.

Some films continue to develop their plots in end credit sequences; preposterous thriller Wild Things holds back some of its most outrageous revelations till the very last minute, and what Amanda Seyfried gets up to during the final credits of Jennifer’s Body makes you wish the film had started rather than finished there.

There are the final credit sequences which are beautiful in their own right, such as the ones for WALL-E and Sherlock Holmes (2009). But while these tricks may keep audiences in their seats, I’ll wager the only time in history they bothered to read all the writing was for a short period after the 1980 release of Airplane!, where the end credits sneakily included namechecks for Charles Dickens and Adolf Hitler.

Airplane! also kickstarted the trend for the post-credits sequence or “stinger” (“I’ll give him another 20 minutes”), now such a popular convention that blockbuster and comedy audiences regularly sit through seemingly endless technical credits in the hope of being rewarded with a 30 second punchline. Young Sherlock Holmes and the Pyramid of Fear (1985) finished with a neat sleight of hand, and the closing credits to Ferris Bueller’s Day Off reveal the terrible fate of Principal Rooney before Ferris pops up to tell us, “You’re still here? It’s over! Go home!” 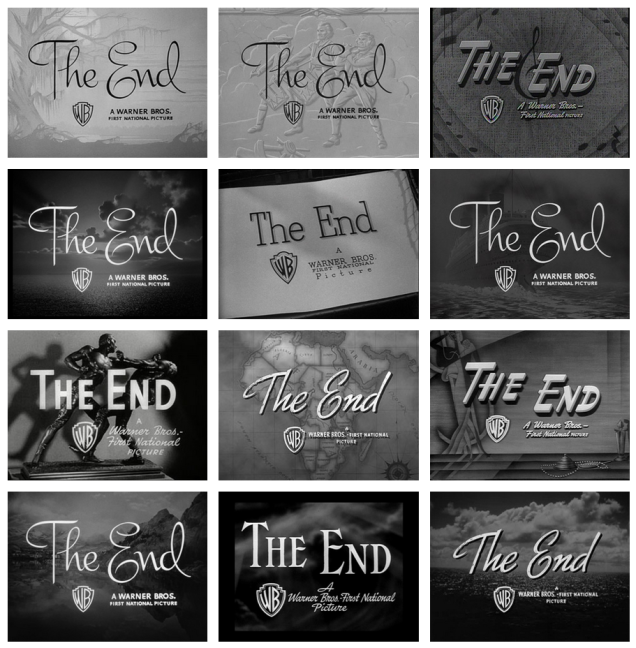 This piece was first posted on the Telegraph website in October 2013.

MGM and Warner Bros. end credit screengrabs from the excellent THE MOVIE TITLE STILLS COLLECTION which is well worth your time and can be found here.

16 thoughts on “SIGNING OFF: END CREDITS IN THE MOVIES”