This post started out as 17 Films from the 1980s that I think are Undervalued and/or Underseen, but I got bored halfway through and cut it down to a more manageable six. Some of the other titles I had in mind might crop up in a later post. Also, I belatedly found out that Paper Mask was released in 1990, which some might class as the 1990s. But what the hell, I’m including it here anyway. 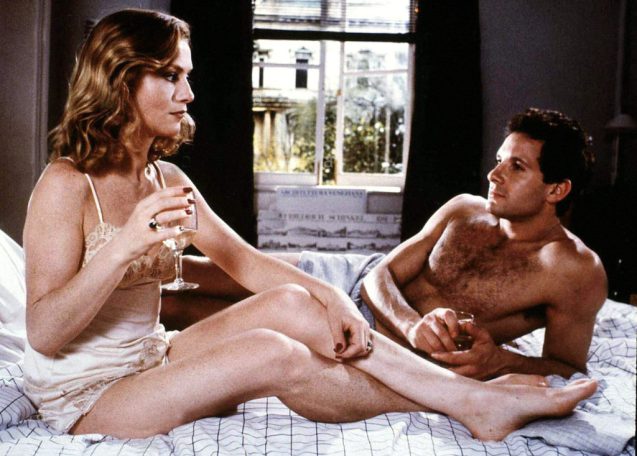 Hard to fathom it now, but Steve Guttenberg was a huge star in the 1980s. He was part of the seminal ensemble cast (Daniel Stern, Mickey Rourke, Kevin Bacon, Paul Reiser, Ellen Barkin) of Barry Levinson’s 1982 directing debut, Diner. He headed the cast of the enormously popular Police Academy (1984) and its first three sequels. He played leading roles in Cocoon (1985), Short Circuit (1986) and Three Men and a Baby (1987) – all massive hits – and in between he switched genres to play the lead in The Bedroom Window, a crafty Hitchcockian thriller written and directed by Curtis Hanson, whose already interesting CV included screenplays for The Silent Partner (1978), White Dog (1982) and a directing credit for a superior teen movie Losin’ It, starring a young Tom Cruise. In 1992, Hanson would steer The Hand That Rocks the Cradle to box-office success, and in 1997 he won an Academy Award for his adaptation of James Ellroy’s novel L. A. Confidential, which he also directed.

The Bedroom Window turns on an irresistible premise. Guttenberg plays Terry, an average Joe who is having an affair with Sylvia, his boss’s wife, played by Isabelle Huppert, icily seductive if slightly out of place in one of her sporadic Hollywood outings, as if a remorseless European femme fatale had strayed into a mainstream Hollywood movie – which, of course, is exactly what has happened here.

One night, after having sex in his apartment, Terry is in the bathroom when Sylvia looks out of the window and sees a woman being violently assaulted in the street outside, shortly before another young woman is murdered in the neighbourhood. To prevent Sylvia’s husband from finding out about her infidelity, Terry pretends to the cops that it was he who witnessed the assault… Which leads to a courtroom fiasco, and Terry himself becoming Suspect Number One.

Indeed, the premise is so irresistible that once it has played out, the rest of the film never quite recovers, and plausibility comes unstuck in the home stretch, though there’s ample compensation in the presence of Elizabeth McGovern, at her most adorable as a plucky assault survivor.

BILLY THE KID AND THE GREEN BAIZE VAMPIRE (1987)

A top contender for Most Bizarre British Film of the 1980s, Alan Clarke’s super-stylised vampire snooker musical is a long way from the hard-hitting social realism (Scum, Made in Britain) for which the director is best known. Billy Kidd (Phil Daniels) is an upstart young cockney cowboy cue-pusher with spurs jingling from his heels and a raucous punk following. His chief rival is six time world champion Maxwell Randall (Alun Armstrong, wonderful), who dresses like Bela Lugosi, with clip-on fangs and squeaky patent leather shoes.

The film builds up to a 17-frame grudge match, the terms of which include a clause forbidding the loser from ever playing snooker again. All the action takes place in what appear to be a series of concrete fall-out bunkers, where the lighting man has gone bonkers with his spotlights, and the characters keep bursting into song, sounding like a cross between The Who’s Tommy and Bertold Brecht’s The Threepenny Opera, and looking like a cheapo remake of The Rocky Horror Picture Show, the budget of which didn’t exactly break the bank to begin with.

Two changes of Bond later, who remembers Timothy Dalton in the role? Yet his two stints as 007 rescued the series from self-parody after the Roger Moore years. His debut in the role takes him from Gibraltar to Vienna to Afghanistan on the trail of a Stalinist resurgent (Jeroen Krabbé) and an American arms dealer (Joe Don Baker) who are obviously up to no good. Highlights include a getaway using a Stradivarius cello as a toboggan, and a killer milkman who throttles his victims with the headphone cord of what was then an ultra-trendy gizmo – the personal stereo. (Also seen in The Terminator, among other films – the Sony Walkman must have been a godsend to filmmakers who wanted victims to remain deaf to their impending doom.)

A bit of political background: in December 1979, Soviet troops staged a coup in Afghanistan and brutally occupied the country for the next ten years (a conflict often described as “the USSR’s Vietnam”), drawing condemnation from the UN National Assembly, but especially from the United States, which led its allies in a boycott of the 1980 Olympic Games in Moscow. (The USSR duly organised a tit-for-tat boycott of the Olympic Games in Los Angeles four years later.) Tribal warlords fought back, guerilla-style, and the resistance eventually coalesced into a mujahideen. The US, UK and China all supplied weapons and training to the Islamist insurgents (including the Saudi-born Osama Bin Laden and al-Qaeda) in this Cold War proxy war that would eventually come back to bite the US and its allies on the bum. (See also the Tom Hanks film Charlie Wilson’s War.)

In Bondland, Russia equals bad, and so one of the aspects of The Living Daylights that hasn’t aged too well is the depiction of mujahideen as heroic freedom fighters led by the dashing Art Malik.

But John Barry’s final Bond score is one of his best, and there is a poignant example of the Sad Collateral Damage, when a SMERSH operative kills a snotty MI6 operative with a sliding door, just as you’ve started to like the guy. (What kind of shit design sliding door has its mechanism showing in an easily accessible panel where SMERSH agents can plant explosives so the door will override any safety fixtures and kill someone passing through? That’s a BADLY designed sliding door.) But Dalton does a good grimface. The film also features a prime example of a Kitchen Fight (Bond isn’t even involved!), utilising such time-honoured elements as a rolling-pin swipe, electric carving knife, pan of boiling water, griddle face-press and flour-in-the-eyes.

Like the better known Stand By Me, this small but perfectly formed ghost story (written and directed by Frank LaLoggia, whose career seemed to go AWOL afterwards) is about a writer recalling pivotal events from his childhood in the Capra-esque small town of Willowpoint Falls, with his nostagia for an idyllic childhood tempered by the adult knowledge that the world is a darker, less innocent place than it appeared.

As in the typical Spielberg setting, the young protagonist is missing (in both senses of the word) one of his parents, but the townsfolk seem to be one big happy family until Halloween of 1962, when a ghostly encounter sets young Frankie on course to learn some uncomfortable truths about his home and family, and TV news bulletins from America’s Deep South become more than just background detail.

There are perhaps one too many mysterious figures in white, and the final reel overdoes the twinkly stardust, but otherwise this is a spooky little ghost story crossed with a coming-of-age scenario that works on multiple levels.

Rosanna Arquette gives a barnstorming performance as an itinerant performing psychic touring the American Bible Belt with her alcoholic father and manager (Jason Robards). But one day she “sees” an industrial whistleblower’s murder before it has taken place, and finds herself on an assassin’s hitlist in a plot that embraces smalltown mores, corporate corruption and ecological irresponsibility. Tom Hulce plays a sceptical local reporter.

Mike Hodges’s offbeat gothic thriller isn’t so much a film that has fallen into obscurity as a a film that never got a decent shot in the first place. UK distributors Palace Pictures, suffering from cash-flow problems, yanked it from the release schedules at the last minute, only to reinsert it the following week, where it promptly got lost among a glut of other new releases, not helped by a badly timed press show that few critics were able to attend. The film finally limped out on video. Meanwhile, in the USA, cash-strapped Miramax released it straight to cable, yet another strike against the laughable myth that the Weinstein brothers were friends to the cinematic art.

Recently released on Blu-ray, and well worth checking out. 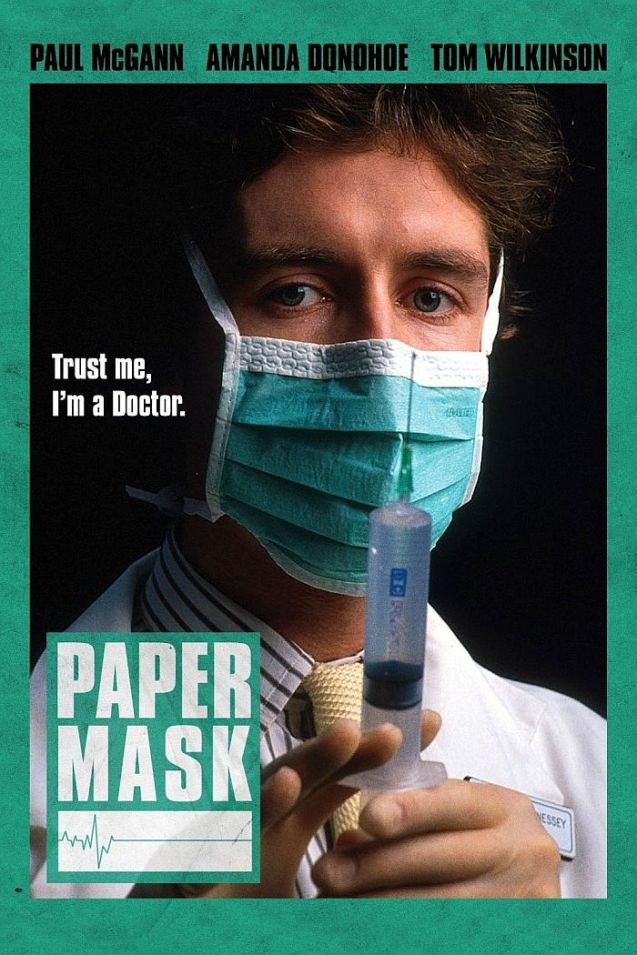 This underrated medical thriller really needed a touch of OTT De Palma-esque expressionism to make it sing; as it is, we’re stuck with Christopher Morahan’s safe but drab TV-style directing straight out of the British Screen and Film Four playbook. But John Collee’s screenplay fits together as snugly as the pieces of a sawn-up ribcage, capitalising not just on the universal terror of the needle and the paranoid fantasy that your doctor might not actually know their arse from their elbow, but also the ins and outs of professional liability, class differences, closing ranks and the mechanics of misplaced trust.

Paul McGann plays a hospital orderly who, almost accidentally, finds himself posing as a doctor in a Bristol casualty ward. The screenplay delivers its thrills on two levels. One: will he get found out? and Two: will he make a hideous mistake and kill someone? McGann is an amoral Ripley-esque opportunist who is doing something very wrong, but we find ourself rooting for him, as does Amanda Donohoe as a competent, intelligent nurse who is accustomed to fixing the cock-ups routinely made by the doctors she works with.

Collee went on to write the impeccable screenplay for Peter Weir’s Master and Commander: The Far Side of the World (2003), my contender for Film In Most Urgent Need of a Sequel.